Tales of the Viennese Jews:
9, Leonard Cohen and
‘The Spice-Box of Earth’

Leonard Cohen’s new, posthumous album, Thanks for the dance, was released yesterday [22 November 2019]. One again, many of the lyrics are infused with his Jewish spirituality, which deepened as he got older but always had a place in his poetry and his songwriting. When he died three years ago, on 7 November 2016, the Jewish Museum in Vienna issued a statement saying ‘We mourn the death of Leonard Cohen. The man with the deep and commanding voice can now be heard only on recordings … Leonard Cohen, the 20th-century prophet of the past, is dead, but his voice lives on.’

His voice and songs had featured that year in the museum’s exhibition, Stars of David: The Sound of the 20th Century, which closed on 16 October, just three weeks before he died. The lyrics of the first verse of Hallelujah were displayed at the start of the exhibition:

Now I’ve heard there was a secret chord
That David played, and it pleased the Lord
But you don’t really care for music, do you?
It goes like this
The fourth, the fifth
The minor fall, the major lift
The baffled king composing Hallelujah

Leonard Cohen left his mark in Vienna. After a concert in the city in 1976, he visited the Arena, a concert venue that was being occupied at the time, and gave an additional concert.

With his description of the Arena as the ‘best place in Vienna,’ he gave the young protesters his support and backing as the demanded to liberate the city from the dusty traces of fascism, persecution, and the extermination of the Jewish population. They felt he had backed their opposition to the small-minded ‘reconstruction’ of Vienna after World War II, and to the self-imposed silence that covered everything.

Cohen returned to Vienna many times, and in 1984, he said of local audiences: ‘In Vienna, there’s a certain value placed on vulnerability. They like to feel you struggling. They’re warm, compassionate.’

A few years later, he wrote a song about Vienna, Take This Waltz, based on the poem Pequeño Vals Vienés (‘Little Viennese Waltz’), written by the Spanish poet Federico García Lorca in New York in the early 1930s.

In this song, released in 1988 on the album I’m Your Man, Cohen’s fascination for the morbidity of Vienna came to the fore once again, but with a coolness that is impossible to emulate:

There’s a concert hall in Vienna
Where your mouth had a thousand reviews.
There’s a bar where the boys have stopped talking,
They’ve been sentenced to death by the blues.
Ah, but who is it climbs to your picture
With a garland of freshly cut tears?
Ay, ay ay ay
Take this waltz, take this waltz,
Take this waltz, it’s been dying for years.

The exhibitions in the two Jewish Museums in Vienna and in the Jewish Museum in Bratislava include interesting collections of spice boxes. Those spice boxes in these three museums reminded me of Leonard Cohen’s second collection of poems, The Spice-Box of Earth, first published in 1961, when he was 27.

The title of the book is found in the poem Out of the land of Heaven, which is dedicated to the artist Marc Chagall (1887-1985).

On the Sabbath, Jews say, the ‘Sabbath Queen’ or the ‘Sabbath Bride’ descends from Heaven to heal the sufferings of the Jews. The arrival and departure of ‘Her Majesty’ is marked by ceremonies. When she enters, everybody is happy; when she leaves, there is a strange sadness. But people take comfort in a symbolic that includes inhaling the aroma of spices contained in an ornamental box, often made of silver, the spice box.

The Spice-Box of Earth became the most popular and commercially successful of Cohen’s early books, established his poetic reputation in Canada, and brought him a measure of early literary acclaim.

The poem seems to be a verbal invocation of one of Marc Chagall’s painting. The rabbi thrusts his hands into the ‘spice-box of earth’:

Down go his hands
Into the spice-box of earth,
And there he finds the fragrant sun
For a wedding ring [for the Sabbath Queen] …
…
And he tells them:
The Queen makes every Jew her lover.

I am listening to his posthumous album, Thanks for the Dance, which arrived in the post as it was released yesterday [22 November 2019]. 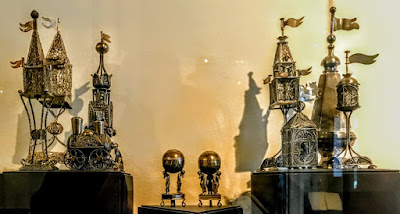 ‘Down comes the warm Sabbath sun / Into the spice-box of earth’ … spice-boxes in the Jewish Museum in Bratislava (Photograph: Patrick Comerford, 2019)