Tales of the Viennese Jews:
15, Martin Buber and the idea
of the ‘I-Thou’ relationship 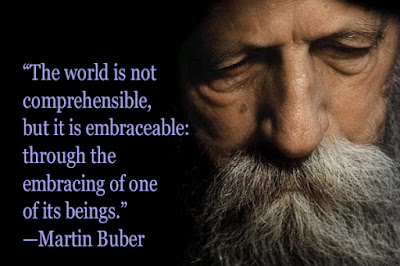 The major Jewish intellectuals who helped make Vienna one of Europe’s most modern capitals at the turn of the 20th century include Sigmund Freud, Arnold Schönberg, Joseph Roth and Martin Buber.

Martin Buber (1878-1965) was an eminent philosopher, translator, and educator. He was born into an Orthodox Jewish family in Vienna on 8 February 1878, and spent part of his childhood there. Through his descent from the 16th-century rabbi Meir Katzenellenbogen, known as the Maharam (מהר"מ), he was also related – albeit distantly in some cases – to Karl Marx, Felix MendeIssohn and Helena Rubinstein.

Reading Kant, Kierkegaard and Nietzsche, he was inspired to study philosophy, and his doctoral work was on Jakob Böhme, the German Lutheran pietist who influenced the Anglican mystic William Law and John Wesley.

He became the editor of Die Welt, the Vienna-based weekly newspaper of the Zionist movement, in 1902, although he later withdrew from organizational work in Zionism.

He thought the Zionist movement had the potential for social and spiritual enrichment. But he also admired how Hasidic communities brought their religious beliefs into their daily life and culture, and published collected stories of two Hasidic founding figures, Rabbi Nachman of Bratzlav (1772-1810), and the Baal Shem Tov (d. 1760), the founder of Hasidism.

Buber valued the emphasis in the Hasidic tradition on community, inter-personal life, and meaning in common activities. George Robinson points out that before Buber, the Hasidim were dismissed as superstitious peasants, who believed in ‘miracle-working rabbis’ – the ‘sort of simple men who were the butt of jokes in Yiddish short stories.’ After Buber, ‘the Hasidim were taken seriously as the pietistic movement they were.’

For Buber, the Hasidic ideal was a life lived in the unconditional presence of God, where there was no distinct separation between daily habits and religious experience. This was a major influence on Buber’s philosophy of anthropology, which considered the basis of human existence as dialogical.

In 1923, he wrote his famous essay on existence, Ich und Du (later published in English as I and Thou). In I and Thou, he introduced his thesis on human existence. He argues there that a person is at all times engaged with the world in one of two modes of being: one of dialogue (Ich-Du) or one of monologue (Ich-Es). Ich-Du (‘I-Thou’) is a relationship that stresses the mutual, holistic existence of two beings. It is an encounter in which infinity and universality are made actual, rather than being merely concepts.

Buber argues that human life consists of an oscillation between Ich-Du and Ich-Es, and that Ich-Du experiences are few and far between. Buber argues that Ich-Es relations – even between human beings – devalue not only those who exist, but the meaning of all existence.

Buber began translating the Hebrew Bible into German with Franz Rosenzweig in 1925, and became a professor of Jewish Religious Philosophy at the University of Frankfurt in 1930. But he resigned from the university after Hitler came to power in 1933. When he was banned from lecturing, he moved to Jerusalem in 1938 and became professor of social philosophy at the Hebrew University.

According to George Robinson, Buber is quoted regularly today by rabbis, who invoke ‘his dialogical principle, the idea of the I-Thou relationship, even his progressive positions on Jewish-Christian and Palestinian-Israeli relations.’ However, his stature is greater among Christian theologians.

Martin Luther King, for example, cited Buber as an influence, stating in his Letter from Birmingham Jail that ‘segregation substitutes an ‘I-It’ relationship for an ‘I-Thou’ relationship, and ends up relegating persons to the status of things. So segregation is not only politically, economically and sociologically unsound, but it is morally wrong and sinful.’