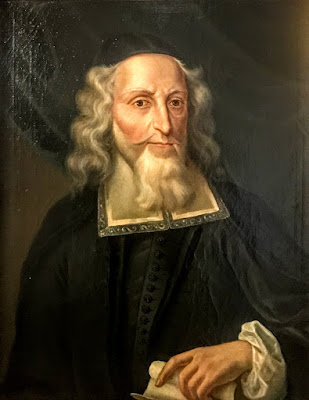 A portrait of the financier Samuel Oppenheimer (1630-1703) in the Jewish Museum in Vienna (Photograph: Patrick Comerford, 2019)

Two portraits in an exhibition the Jewish Museum on Dorotheergasse tell the story of bankers and financiers and how they were mistreated by the Habsburg imperial court.

Samuel Oppenheimer (1630-1703) was a business genius who financed the Emperor’s war against the Ottoman Turks, amongst other things. Without his aid, the defence of Vienna in 1683 would not have been successful.

Although the Jews had been recently expelled from Vienna in 1670, the emperor permitted Oppenheimer to settle in city, together with his Gesinde, his followers, who included a number of Jewish families. He even received the privilege of building a mansion in the heart of Vienna.

Oats were one of his most important trading commodities. As the ‘fuel’ for horses, oats were of great importance to the army.

Oppenheimer was also a man of scholarship. Prince Eugene of Savoy secured for him a large number of valuable Hebrew manuscripts from Turkey, which became the nucleus of the David Oppenheim Library, now part of the Bodleian Library in Oxford.

The portrait in the exhibition shows Oppenheimer at the peak of his career, as an elegantly dressed Austrian nobleman.

When Oppenheimer died in 1703, the imperial court refused to pay its debt of 5 million guilders and simply declared Oppenheimer bankrupt. His entire assets were lost as a consequence. Later, his family were expelled from Vienna.

After Oppenheimer’s death, Samson Wertheimer (1658-1724) became the most important lender to the Habsburg court. Like Oppenheimer, he supported the poor, helped to build synagogues, and financed the printing of Hebrew scripts.

The portrait shows Wertheimer not only as a man of the world but as a pious scholar, with a parchment and a quill in his hands. He was the Chief Rabbi of Hungary and Moravia, and rabbi of Eisenstadt.

Jewish women of the time also carried out charitable activities in Vienna. For example, Miriam Sinzheim, a granddaughter of Samuel Oppenheimer, supported building a Jewish house of learning in Worms and donated the Torah scroll and ritual objects to it. 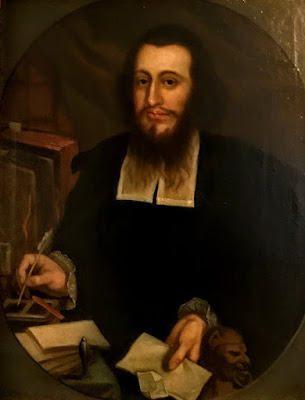 A portrait of the financier and rabbi Samson Wertheimer (1658-1724) in the Jewish Museum in Vienna (Photograph: Patrick Comerford, 2019)

Posted by Patrick Comerford at 07:04