Fine fare and drinks in Lichfield 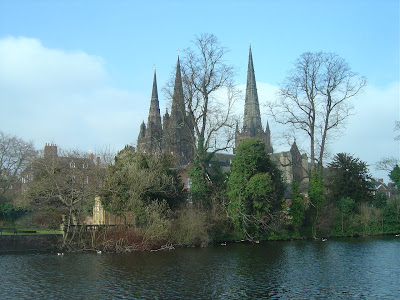 The Minster Pool, Lichfield Cathedral and the Cathedral Close from the windows of Ego Restaurant in Bird Street (Photograph: Patrick Comerford)

During this relaxed week in Lichfield, some of the pleasures have been enjoying the restaurants and cafés of this charming cathedral city: coffee in the Tudor Café on Bore Street, a quick look into Hindley’s bread shop in Tamworth Street, and lunch or dinner in Ego on Bird Street and the Olive Tree in Tamworth Street, with their combination of English and Mediterranean cuisine. 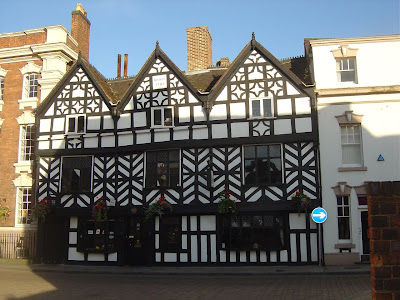 The Olive Tree, beside the Methodist Church in Tamworth Street, may look like an ordinary shopfront from the narrow footpath on the street outside. But once inside you could never call this ordinary. The wooden floors and spacious wooden tables help to create a homely, rustic atmosphere, and the open kitchen allows you to see the food being prepared. 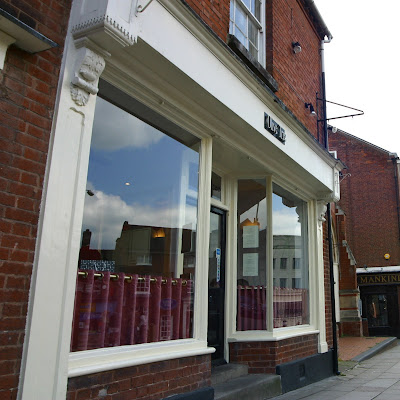 And there are breath-taking views from the full-length windows out over Minster Pool and across to the spires of Lichfield Cathedral. 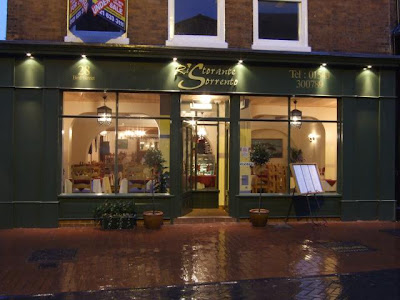 Ristorante Sorrento on Bird Street, one of the finest Italian restaurants I know in England

Ristorante Sorrento, also on Bird Street, is one of the finest Italian restaurants I know in England. However, I was sorry to see Doveston’s has closed on Bird Street has closed and moved to Whittington. This was one of the finest cafés when it came to good food. I have not yet been inside the new damnfinecafé (sic) that has replaced Doveston’s. Some of the restaurants and cafés on Bird Street found the going tough in the past year, and among those to close was Soda Streat, the only Irish café that I knew of in Lichfield.

The Tudor charm of Thrales on Tamworth Street

Lichfield has many other good restaurants too, including Thrales in a quaint black-and-white timber framed house, dating perhaps from the 17th century, at the top of Tamworth Street, and Chandlers in the Corn Exchange Building on the corner of Conduit Street and the Market.

But Lichfield also has some wonderful traditional English pubs. I’m not very fond of pubs and have very little interest in beer. But there’s something homely and comforting about English pubs … they have something that I seldom find in Irish pubs. 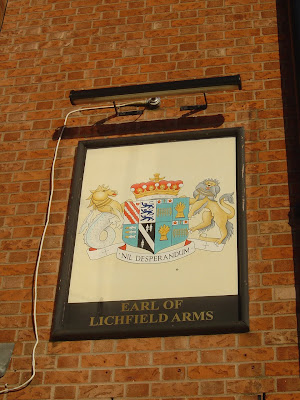 The Earl of Lichfield Arms in Conduit Street is one of the best pubs in the city centre. Known locally as the Drum, it was once the scene for press-ganging vulnerable young drinkers into the army. It was bought by the Anson family in the 1840s and renamed the Lichfield Arms. The present pub incorporates the premises of a barber’s shop that stood next door until about 1970. I still remember the Central Garage, which occupied the neighbouring premises, now McDonald’s. 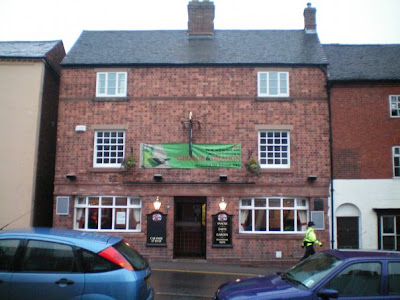 The George and Dragon ... this corner of Lichfield feels like a rural village

Just outside the city centre, the George and Dragon on Beacon Street is a friendly local pub with stunning views of Lichfield Cathedral from the historic garden behind, which includes the site of Prince Rupert’s Mound, an important battle location from the Siege of Lichfield during the English Civil War in the 1640s.

Today, this quiet corner of Lichfield, walking on up past the Cathedral Lodge Hotel towards the recently re-opened Feathers, has a quaint, semi-rural atmosphere about it. When you turn up Anson Avenue at the Cathedral Lodge, the hill rises until you have an unexpected, dramatic view across the rolling countryside of south-east Staffordshire. 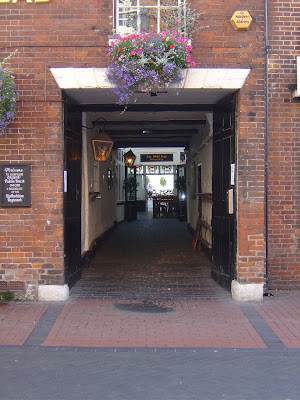 Part of the charm of the King’s Head is the cobbled courtyard (Photograph: Patrick Comerford)

Another association with the Civil War can be found at one of my favourite pubs here: the King’s Head in Bird Street. The Swan closed in the late 1970s or early 1980s, and is now a restaurant, Ask. Since then, the King’s Head has become the oldest pub in Lichfield. It dates back to 1408, which means it is more than 600 years old. This is a former coaching inn, with brick façade, timber-framed interior, cobbled courtyards and walls dripping with memorabilia from the Staffordshire Regiment, which was formed here. 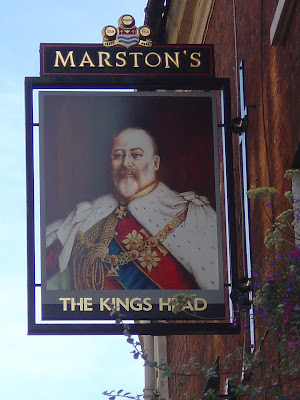 The King's Head sign displays Edward VII ... but it was Charles I who lost his head at the time this old coaching house was being renamed (Photograph: Patrick Comerford)

The King’s Head was first known as the Antelope, and then as the Unicorn. No-one knows which king the place was called after, and the head on the sign outside is that of King Edward VII. But, as the present name was used from 1650 on, it must have been named after the execution of Prince Rupert’s uncle, King Charles I, who lost his head the previous year.

The King’s Head was popular with my age group when I first came to Lichfield in 1970, but it is a family-run pub, offering home-cooked, traditional pub grub, and a selection of real ales, with live entertainment every Thursday, Friday and Saturday night. The cobbled courtyard is a wonderful place to drop into for a quiet drink and to read the paper on a sunny afternoon. 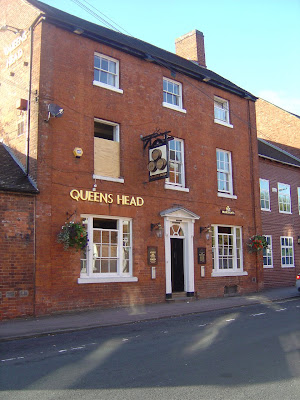 The Queen’s Head ... a friendly atmosphere and a firm favourite of cathedral choristers (Photograph: Patrick Comerford)

The Duke of York, which was closed for a long time, has reopened. I once stayed in this pub on Greenhill, close to Saint Michael’s Church, in 1973, and was sad to see it close. Now it has re-opened, and claims to be the oldest inn in Lichfield. But it can't beat the King’s Head for age ... indeed, the Duke of York who gave the place its name was James II, the dethroned son of Charles I whose lost head probably gave its name to the King’s Head.

At the moment, however, my favourite traditional pub in Lichfield must be the Queen’s Head in Queen Street. I always drop in here when I’m in Lichfield. This is a legendary and friendly pub just on the margins of the city centre. It is popular with the cathedral choristers, and has the friendly and family feeling of being a real local pub.

The Queen’s Head was the first building to be completed on Queen Street. Building work started in 1835, and although it opened in year of Queen Victoria’s coronation, the name may have been taken from a pub in Bore Street, which then became the Turf Tavern, and later the Prince of Wales – now sadly closed. 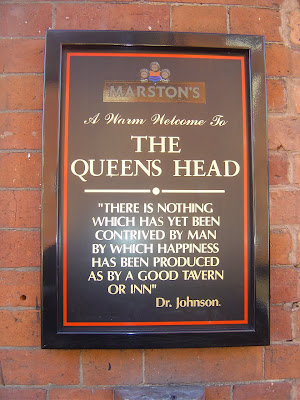 Words of wisdom from Dr Johnson as you enter and leave the Queen’s Head (Photograph: Patrick Comerford)

Today, there is a strong sense of community in the Queen’s Head. One of the amazing features is the huge cheese counter where you can order from a large variety of cheese, pickles and bread ... it was the obvious choice for a late lunch one day this week, but I was there the night before for a nightcap after my candle-light tour of the cathedral.

As I left the Queen’s Head, a sign outside reminded me of the wise words of that son of Lichfield, Dr Samuel Johnson: “There is nothing which has yet been contrived by man by which happiness has been produced by a good tavern or inn.” And I headed back to my room in St John’s House on Saint John Street – originally a 17th century inn known as The Bear.

Posted by Patrick Comerford at 06:50