Two walks by the sea at Easter weekend 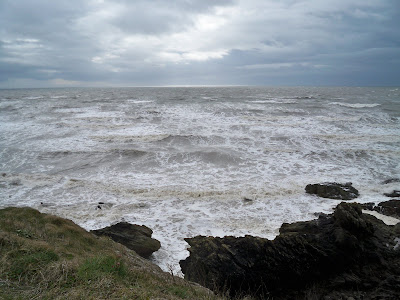 This has been the busiest and the most beautiful Easter for a long time. This is my favourite time in the Church Calendar, and I was busy throughout Holy Week and Easter … the most meaningful for many years.

There were chapel services, church services, cathedral services, sermons, lectures, staff meetings, essays and articles in The Irish Times, the Church Review and the Diocesan Magazine, and planning for seminars. In between, there was time for lunch or coffee with friends. And – as this is a holiday weekend in Ireland – I even managed two walks by the sea … a double dose of my favourite activity and exercise that keeps me on top of my symptoms from sarcoidosis.

After the Good Friday service in the chapel, I headed out to Portrane, on the edge of the Donabate peninsula in Fingal. Initially, I thought about going for a walk on the beach at the Burrow. But the East wind was strong, the sea was swelling, the waves were choppy. And so instead I decided to walk the cliffs from the Martello Tower at Tower Bay, along by the hospital, and on towards Donabate. 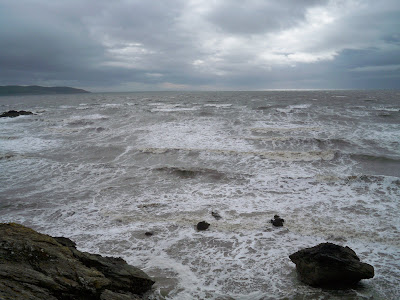 Looking out to a choppy sea from the cliff walk between Portrane and Donabate (Photograph: Patrick Comerford, 2010)

It was too windy to take my hat with me. The cold air was biting; I could feel it burning into the cheeks on my face and into my ear. I wrapped my scarf around as much exposed skin as possible. 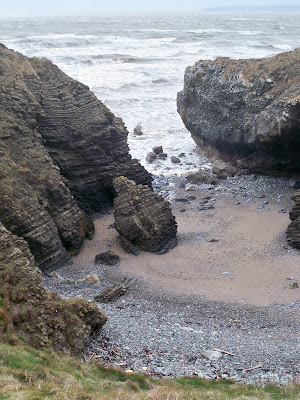 I was surprised by the number of people out for a brisk walk that morning – only a few, but nevertheless a few. Down below, in one little cove, a lone rock climber was braving this weather as he tried and tested his skills. But no-one was out on the sea in a boat or sailing. It was as dark and as choppy as deepest winter.

Eventually I turned back. But the sea, the waves and the sea breeze were exhilarating. 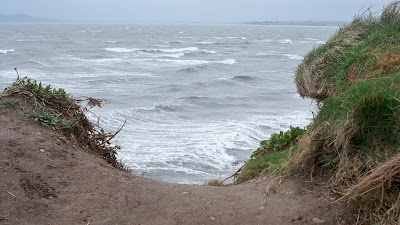 A glimpse of the sea between sand and tufts and grass at the cliffs in Portrane (Photograph: Patrick Comerford, 2010)

Back in Donabate, I stopped for a while at Newbridge House, which I hadn’t visited for about ten years. On the way up the drive, the fields and parklands around Newbridge House were rain-soaked. 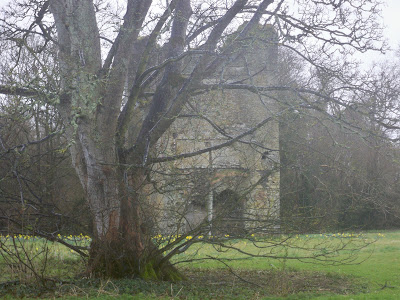 Rain and mist covered Lanistown Castle in a sleepy shroud on Good Friday ... the only hint of Spring in the rain-soaked landscape came in the daffodils, bursting out joyfully around the ruined tower (Photograph: Patrick Comerford, 2010)

On the left of the drive up to the house stands the ruins of Lanistown Castle, a 14th Century Norman peel tower. Rain and mist covered the castle in a sleepy shroud, and the only hint of Spring in the rain-soaked landscape was provided by the daffodils, bursting out joyfully around the base of the ruined tower.

Lanistown Castle belonged over the centuries to the de Launey, de Cardiff, Bathe, Allen and Handcock families before Archbishop Charles Cobbe of Dublin bought the lands of Lanistown, Newbridge and Donabate. 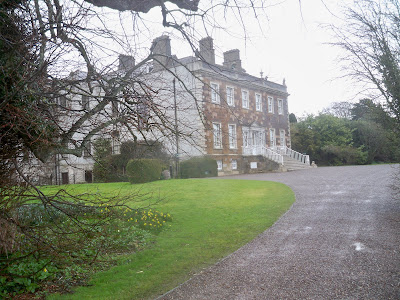 Newbridge House was built in 1736-1737, to a design by Richard Castle, and has rich and elaborate stucco plaster-work by Robert West, who may also have decorated the Cobbe gallery in Saint Patrick’s Church, Donabate.

Newbridge House is a very fine example of a true Georgian mansion within its original demesne. An early visitor was John Wesley in 1747. When the archbishop died in 1765 at the age of 79, it was said he was “the eldest bishop in the Christian Church.” He was buried in Saint Patrick’s Church, Donabate.

Newbridge House was the Cobbe family home until 1985, when it was acquired by Fingal County Council. The family continues to reside there on a part-time basis, and under an unique agreement has provided on loan the original furniture, pictures and other works of art on display in the main apartments. Unfortunately, although the grounds are open, Newbridge House is closed for the foreseeable future and there were no visitors around the archbishop’s house on this cold, wet, windy Good Friday morning.

On Sunday afternoon, after the Festal Easter Eucharist in Christ Church Cathedral, and lunch with some friends in La Dolce Vita in Temple Bar, I headed back to Fingal for a walk on the beach in Skerries.

Unlike Friday, this was a beautiful, dry, crisp day, despite the low temperatures. On the brow of the hill above Loughshinny, just before the road dropped down towards Holmpatrick, there was a breath-taking view across to the Mourne Mountains on the Co Down coastline. I have not seen them so clearly so far this year, and he peaks were capped with snow. 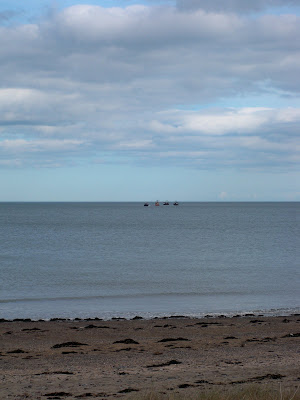 Four trawlers on the calm sea between the shore and the islands off Skerries on Sunday afternoon (Photograph: Patrick Comerford, 2010)

The calm sea was so completely different from Friday’s experience in Portrane and Donabate, and now four small trawlers were out between the shore and the islands.

Up on Red Island, I could see the effects of the weekend storms, which had strewn stones and sand up on the grass. 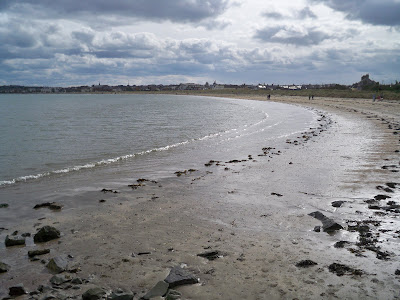 Skerries was full of life on Sunday afternoon. After the stormy tumults of the weekend, fresh life had returned. I thought there might be a sermon illustration for Easter in that some time.

I had one more walk along the beach, and then back in Strand Street I picked up the April edition of the Skerries News in Gerry’s. This edition has had many production problems, and so it was great to see the finished product. Well done. Inside, there is full coverage of how the people of Skerries got together and overcame obstacles to organise a Saint Patrick’s Day parade. There’s a spirit in Skerries that must laugh in the face of adversity.

One of the most ridiculous efforts at translation I have ever seen (Photograph: Patrick Comerford, 2010)

Later in the evening, I dropped in to see some friends I first met on the Greek island of Kos ten years ago. They live near Sandymount Strand, and I was stunned to see the ham-fisted effort to render Cambridge Avenue into Irish – Ascaill Mhic Ambróis, the Avenue of the Son of Ambrose. They might have tried something like Ascaill Droichead an Cam, but this is worthy of ridicule.

I always hated the efforts at school to try an concoct an Irish rendering of Comerford ... it’s a name derived from an English village, and I like it as it is, thank you. As for poor Cambridge, could someone please do something about this absurd name-sign on Cambridge Avenue?

The weekend walks were encouraging as I continue to wrestle with the symptoms of my sarcoidosis. Despite recent good news that I should soon be hoping for remission, my joints, my lungs, my feet and my neck continue to give me problems, I have a constant, burning tingling under my feet and I wake throughout the night with cramps in my legs and feet.

But, like the people of Skerries, I can laugh in the face of adversity. After all, I’ve walked the cliffs of Portrane in bad weather, I’ve had some wonderful coastline walks this weekend, and I have Easter faith, I am filled with Easter hope.

And while I may have sarcoidosis, sarcoidosis will never have me.
Posted by Patrick Comerford at 18:47