A perfect day in Pugin-land: Gorey and Wexford

A view across Wexford Harbour from Saint Peter’s College, Wexford ... Pierce’s twin churches are at each end, and the tower of the Friary points up too (Photograph: Patrick Comerford, 2010)

I set off on the Pugin trail again yesterday, to look at Pugin’s massive church in Gorey and his chapel in Saint Peter’s College, Wexford.

Saint Michael’s Church in Gorey is one of the earliest of Pugin’s churches. It dates from 1839, when he was also working in Alton for the Earl of Shrewsbury and beginning his plans for Saint Chad’s Cathedral, Birmingham, and Saint Giles’, his “perfect” church in Cheadle.

But Saint Michael’s is unique as a Pugin church, for this is built in the Norman or Romanesque 12th century English style, rather than in Pugin’s preferred Gothic. 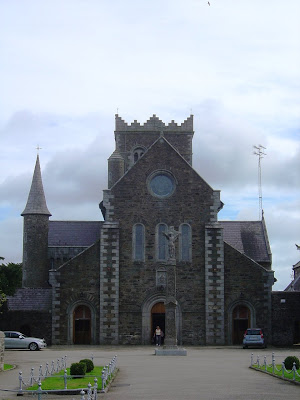 Phoebe Stanton notes that while Saint Michael’s is comparable in size to Saint Giles’, it does not share its richness: “The Gorey church is large and sober, astonishing not only for its Norman style but for the way in which it does and does not resemble the work Pugin was doing in England.”

When the church was opened in 1843, it was claimed that Pugin’s design had been influenced by Dunbrody Abbey in south Co Wexford. But Saint Michael’s has many of the proportions of Pugin’s cathedral in Birmingham, being as wide and almost as long. Had his planned spire been built on the battlemented tower, Saint Michael’s would have acquired the height to balance its horizontal proportions.

The church has a seven-bay aisled and clerestoried nave, two-bay transepts and an apsidal chancel. This apse in the East End of the church is more of an English Romanesque feature that an Irish one – Irish examples typically had square east ends. Pugin’s only other Romanesque essays – Saint James in Reading, and the crypt of Saint Chad’s Cathedral in Birmingham also had apsidal chancels.

John Woodburn kindly showed me around the church after a funeral mass. Pugin’s rood screen, altar and reredos have been removed since the post-Vatican II liturgical changes, and the original stencilling is gone from the towers and walls. But if the church has lost some of its internal beauty, it retains its majesty.

This is Pugin’s first cruciform church, and Pugin used the windows in each transept and at the west end to make a subtle Trinitarian statement. He pays some interesting tributes to Irish church history, with his round tower and the mission cross at the west end.

The Mortuary Chapel has a later Harry Clarke window, but the former Baptistery is crumbling. It is in the shape of an octagon – a shape from the Lantern Tower that inspired Pugin after his visits to Ely Cathedral. But the font has been removed, and is in a neglected state outside a door on the north side of the church, while the tiles, in a pattern inspired by Pugin’s stencil work, are beginning to crumble on the window ledges. 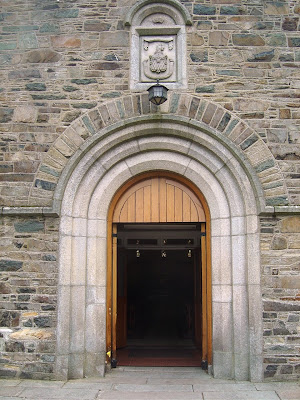 The Romanesque West Door, with its round arch, is unique for a Pugin church in Ireland, but is similar to his door in Dudley, and both the door and the transepts reminded me of Holy Cross Roman Catholic Church on Upper John Street, Lichfield, designed by Joseph Potter, and where Pugin had designed the (now gone) rood screen. There are also echoes of the small door into the tower in Holy Cross and its spiral stairs.

Pugin’s clerk of works at Gorey was Richard Pierce, who had also worked with Pugin in Wexford, and who would later design the twin churches there.

From Gorey, I headed down through Ferns and Enniscorthy – where Saint Aidan’s Cathedral is Pugin’s Irish gem – by the banks of the River Slaney, to Wexford town. It’s over 35 years since I moved from Wexford to Dublin, but I still feel at home in the town. 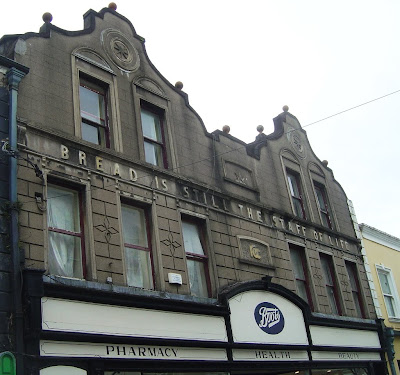 Bread is still the staff of life ... even if it’s not served in Boots (Photograph: Patrick Comerford, 2010)

Lunch had to be in La Dolce Vita – the finest Italian restaurant in Ireland. Afterwards, as I strolled through Wexford I noticed the top of the facade of Boots has changed little since this was Frank O’Connor’s bakery. The initials FOC can still be seen, and the slogan still remains: “Bread is still the staff of life.” The constant response of one friend as he passed by the shop in North Main Street was: “Man does not live by bread alone.” 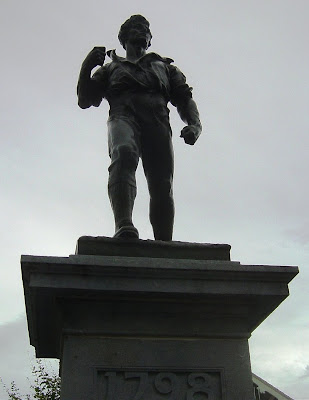 The Pikeman in the Bull Ring in Wexford has lost his pike ... has he become a pacifist? (Photograph: Patrick Comerford, 2010)

In the Bull Ring, I noticed the Pikeman has lost his pike. Whatever happened to it? Has he been disarmed? Has he become a pacifist?

But I wasn’t in Wexford to remember 1798. I headed on up past Rowe Street Church, designed by Pierce who had worked with Pugin in Gorey, past the Friary, where Pierce also designed the library, and on up through Francis Street, Waterloo Road and Davitt Road to Summerhill and Saint Peter’s College.

Standing in the rain in front of the main buildings of the college, there was a clear vista across the mouth of the Slaney and out over Wexford Harbour, the view framed by the spires of Pierce’s Twin Churches, and the Friary Tower in between. 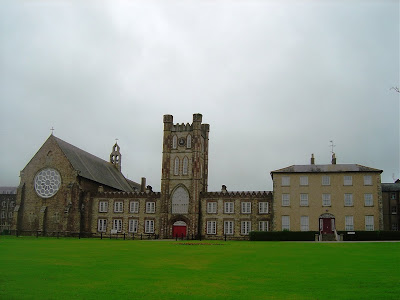 The four-storey Gothic Tower at the centre of the main buildings is said to have been designed by Pierce, the chapel is Pugin’s first great work in Ireland and predates his church in Gorey by a year.

The Principal of Saint Peter’s, Patrick Quigley, kindly arranged for me to see the quad or court designed by Pierce and Pugin, and to see inside Pugin’s chapel.

Phoebe Stanton has identified the chapel at Saint Peter’s as a larger version of Saint Mary’s, his church in Uttoxeter which I also visited this summer. The chancel is the same height as the nave. The altar still has Pugin’s triptych which resembles the triptych he designed for Uttoxeter and Derby. In the rose window above, the medallions celebrate Pugin’s patrons in Staffordshire and in Wexford, the Talbot families.

The screen, rood, side altars and simple pews designed by Pugin are long gone, the floor level has been changed, and the seating has been rearranged in collegiate style. But the impact is still dramatic, and – after Saint Giles’, Cheadle – this is the most beautiful Pugin church I have visited this year. 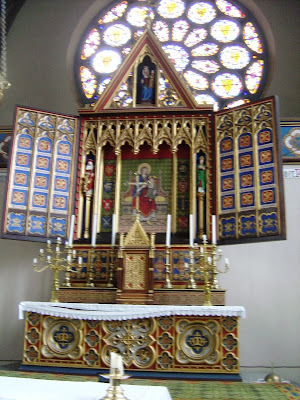 I made my way back in prayerful silence and gratitude down Summerhill and Grogan’s Road into the Old Pound (Saint Peter’s Square), along School Street, where I lived in the early 1970s, and into the town centre.

On the way back to Dublin, the rain was too heavy to stop for a much-hoped-for walk on the beach at Kilmuckridge. But as I approached Gorey, the rain seemed to ease. Heading over to Riverchapel, where the parish church was designed by JJ McCarthy, the “Irish Pugin,” I arrived at Courtown Harbour.

The Bayview Hotel is boarded up, and I wondered whether it is ever going to open again. One full block of new apartments is closed off, without even a “For Sale” sign to be seen.

Down at the beach south of the harbour, two men braved the waters in a kayak. On the north beach, two men were trying to teach a woman how to handle fishing rod and cast her line into the sea.

The battery in my camera had run out of time. There would be no photographs. The tide was in, but the sand was soft and golden. I went for a walk on the beach. I had a perfect day.