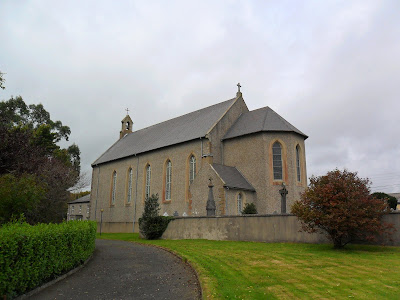 The Church of the Assumption, Bree (Photograph: Patrick Comerford, 2010)

I spent most of the day searching out three Pugin churches in Co Wexford yesterday [Friday 22 October 2010] ... three churches I had never visited before, but three churches that are pivotal to understanding the development of the Gothic Revival in Church architecture in Victorian Ireland: the Church of the Assumption in Bree, Saint Alphonsus in Barntown, and Saint Mary’s in Tagoat.

I arrived in Bree, south of Enniscorthy, at lunchtime, just as a funeral was ending. Had I arrived any earlier, I could not have intruded and taken photographs of the Church of the Blessed Virgin Mary, or the Church of the Assumption, which is probably the earliest Pugin church in Ireland.

The church was built by Canon Philip Devereux, thanks to the generosity of the Talbot and Power families, on land given by Colonel Henry Alcock of nearby Wilton Castle in 1837. John Hyacinth Talbot “procured” the plans from Pugin, and – if we date the church to the laying of the foundation stone in 1837 – then this is the first of Pugin’s Irish churches, although he never actually acknowledged the church as his own.

The plan for the church in Bree basically follows the same plan as Pugin’s design for the chapel of Saint Peter’s College, Wexford, and the design used for the Church of Saint James in Ramsgrange. As an early Pugin church, Bree is a simple Gothic-style building with a long, five-bay nave, with a distinct five-sided apse, both under separate roofs. The apse is decorated in mosaic by an unknown artist who is thought to have been Italian. The three stained glass windows in the apse depict the Assumption in the centre window, with Saint Aidan of Ferns on the left and Saint John the Baptist on the right.

The simple wall post and exposed truss roof was characteristic of Pugin, and this very early example of open roof timbering was once one of the main features of the building. However, it is now covered and no longer visible, and the church was changed drastically during renovations carried out in the latter part of the last century.

Still, the church in Bree remains an interesting part of Wexford’s Pugin heritage, and an important church in the light of the other churches in Ireland he designed in the following years. 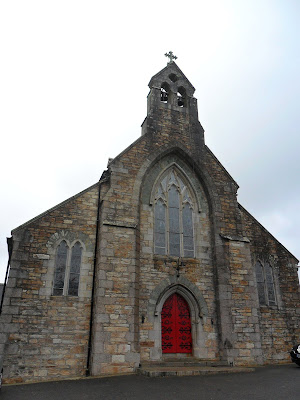 From Bree, I headed down the west bank of the Slaney, through Killurin, to the Wexford bypass at Ferrycarrig and on to Barntown, where Saint Alphonsus’s Church was planned by Pugin as a complete Catholic parish church.

This church is Pugin’s only complete expression in Ireland of the small village parish church. Although O’Leary suggests the church is a finer version of the simplest of all Pugin’s designs, Saint Augustine’s in Solihull, it was obvious from the outside that Pugin’s design for Barntown is based on Saint Michael’s, one of two mediaeval parish churches in the village of Longstanton, 10 km north-west of Cambridge ... a church I managed to visit and photograph earlier this summer. 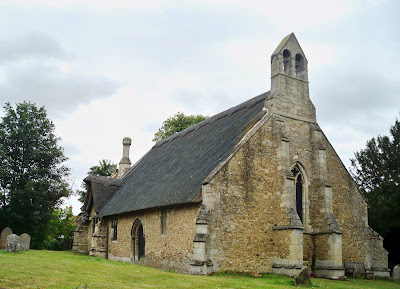 Saint Michael’s ... a rare example of an English church with a thatched roof ... is said to have inspired Pugin’s design of a parish church in Barntown, Co Wexford (Photograph: Patrick Comerford, 2010)

The mediaeval church at Longstanton, which was built ca 1230, was one of the “model” churches published by the Ecclesiologist, and it was also used by Pugin as a model for Saint Andrew’s, the small Catholic church he built in 1842-1843 in Cambridge, shortly before his church in Barntown was built.

The foundation stone of the parish church in Barntown was laid in July 1844 and it was blessed by Bishop James Keating the following September. The church was built between 1844 and 1848, and the first Mass here was celebrated in 1848. The church is dedicated to Saint Alphonsus Ligouri and the Blessed Virgin Mary.

From the outside, this Gothic-style church is a simple aisled church with a western double bellcote, south porch and sacristy at the east end of the north side. However, there was a wedding in the church as I arrived. Unlike Bree, I was unable to take photographs of the interior ... but only for the moment. 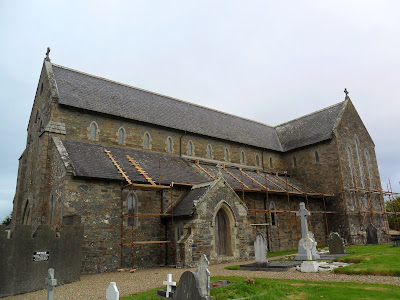 Saint Mary’s Church, Tagoat, is the last of Pugin’s churches in Co Wexford and many regard it as his most important parish church in Ireland (Photograph: Patrick Comerford, 2010)

From Barntown, I bypassed Wexford Town, and headed out on the Rosslare road to tiny Tagoat, where Saint Mary’s Church is the last of Pugin’s churches in Co Wexford. Many regard Saint Mary’s as the most important of Pugin’s parish churches in Ireland, and it has been has been described as “an example of Pugin’s best work on a small church.”

Pugin’s great Irish patron, John Hyacinth Talbot, inherited Ballytrent House, the ancestral home of the Redmond banking family, when he married Ann Eliza Redmond, a 19-year-old heiress, on the day of her father’s death, 10 May 1822. Eliza died four years later in 1826, and in 1843 Talbot commissioned Pugin to design Saint Mary’s Church in Tagoat as both his parish church and as a memorial to his late wife.

Local tradition says work began on the church around 1839, but a more likely starting date may be between 1843 and 1845, although trying to date this church remains a problem. Pugin visited the site on 24 May 1845, the church opened in 1846, and the first Mass celebrated in the new church was the Funeral Mass for Canon Rowe, who died on 18 June 1846.

Saint Mary’s is a large, cruciform-plan, lancet-style Gothic church, and its large scale is more typical of those built by Pugin’s Irish followers, such as Pierce, McCarthy, Ashlin and Coleman. The church has excellent proportions, fine clear lines and careful details. Additions were later made at the north-east corner, and until recently, the exterior stonework was plastered over ... although this has been removed thankfully.

Inside the church, the nave is separated from the aisles by colonnades of Gothic arches supported on massive granite pillars. The nave and aisles join a transept with three arches opening into the sanctuary and two side chapels. This layout follows the traditional T-plan associated with earlier, traditional churches in rural and provincial Ireland.

The transepts are lit by three tall lancet windows, and long lancet windows light the side walls, with smaller windows in the clerestory. This dramatic and confident handling of light is typical of Pugin’s hand. On one side, the windows depict Saint Aidan of Ferns, Saint Patrick, Saint Brigid and Saint Lawrence; on the other side they depict the Crucifixion, the Nativity, and the Baptism of Christ and the Resurrection.

In the sanctuary gable, the East Window is a four-light Gothic window. At the west end, a triple lancet window depicts the Annunciation.

The windows in the side walls include seven modern windows by George Walsh, whose subjects include the Miraculous Draught of Fishes, the Parable of the Good Samaritan and the Parable of the Prodigal Son. A window depicting the Sacrifice of Isaac commemorates the Wexford Martyrs, who were beatified in 1992. Another window honours the church’s architect, Pugin, the only window to his memory that I know of, and there is a window that commemorates William Archer Redmond (1825-1880), father of John E. Redmond (1856-1918), leader of the Irish Parliamentary Party.

Saint Mary’s contains more original Pugin features than any of his other Irish churches, including floor tiles in the large sanctuary area produced by Henry Minton (1795-1858), wooden screens to the side chapels, stained glass by Hardman, a set of four brass altar candlesticks designed by Hardman and presented by Pugin when the church was dedicated in 1846, and a marble, brass-inlaid memorial floor slab in the sanctuary commemorating Canon Rowe, presented by Sir Thomas Esmonde, Pugin’s patron in Gorey. Another floor plaque commemorates Canon Rowe’s successor, Canon John Kavanagh, who died in 1869, and an elaborate brass plate commemorates Canon Thomas Cloney, Parish Priest of Tagoat, who died in 1895.

Pugin also designed a wooden High Altar for Tagoat Church. This Pugin altar was later moved to the Church of the Assumption and Saint Mannon in Clearistown, but its whereabouts is now unknown. Thankfully, the original altar rails and pulpit designed for Tagoat remain intact. 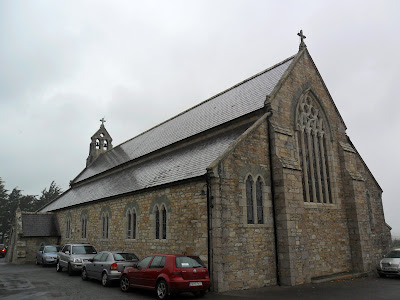 The church in Barntown remains a Pugin treasure ... inside and outside (Photograph: Patrick Comerford, 2010)

After a late lunch in Kilmore Quay, I just wondered whether I might still get inside the church in Barntown, and whether the fading light would frustrate any efforts to photograph the interior. Happily, the church was still open, and I opened entered by the south porch to find a true Pugin treasure.

Saint Alphonsus’s church is 100 ft long, 43 ft wide and from the floor to the apex of the roof it measures 45 ft. A feature of the church is the absence of a clerestory. In this, Barntown is unlike other Pugin churches of these dimensions, but here he faithfully replicates Saint Michael’s in Longstanton. The church consists of a nave and aisles with a belfry, south porch, wide alleys for processions, a distinct and deep chancel, a sacristy and Lady Chapel, etc. Although no distinction is made between the nave and the chancel on the plans, Pugin would have envisaged dividing these with a screen.

The finest remaining feature of the interior is the surviving East Window depicting the Annunciation. This window was made in Birmingham to Pugin’s design by Hardman and Co in 1848 and was presented to the church by John Hyacinth Talbot. The external stonework and solid nature of the church is striking, with Pugin once again using at least four types of local stone in a delicate, constructive polychromy.

Almost half a century passed before the church was consecrated on 12 September 1899. Since then, this Pugin church has undergone many alterations, and many parts of the interior were completely stripped of any original decoration by Pugin. From 1946 until the early 1950s, extensive renovations were carried out through the generosity of Philip Pierce, a parishioner and a member of the family associated with a famous foundry in Wexford. During this work, the screen was removed, the sanctuary, chancel and Lady Chapel were re-floored in marble, some of the original glass was replaced, a two-light window depicting the apparitions in Fatima was placed in the Lady Chapel, and the plain glass of the West Window was replaced with glass on the theme of the Assumption, which was proclaimed as a dogma in 1950, and varying accounts of Marian apparitions.

However, further renovations and decorative works were carried out in Barntown in 1998-1999. Unlike the restoration work in Saint Aidan’s Cathedral in Enniscorthy, where the interior of Saint Giles’s, Cheadle, provided inspiration for redecoration, new stencilling and decoration was commissioned, and once again this is a bright church, proud of its Pugin heritage and place for worshipping the Lord in the beauty of holiness. Essentially, the church remains structurally unaltered, retaining the spirit Pugin’s original vision for a complete Catholic parish church.

It is interesting to compare Pugin’s design in Barntown, with Saint Michael’s Church in Longstanton, near Cambridge, which is now disused, or its twin church in Philadelphia, the Church of Saint James-the-Less. Tradition says the remarkable fidelity of the church in Pennsylvania to the Gothic style was accidental: when the parish asked the Ecclesiological Society, later the Cambridge Camden Society, for a set of plans for a new church, it was inadvertently sent GG Place’s measured drawings of Saint Michael’s, and these were then followed in every detail as the church was built under the supervision of the architect John E. Carver in 1846-1848, at the same time as Barntown and Pugin’s other churches in Co Wexford were being built.

Darkness had fallen on Barntown when the sacristan arrived, eager to close the church for the night. By then I had managed to photograph the interior of another Pugin gem.

Posted by Patrick Comerford at 18:45