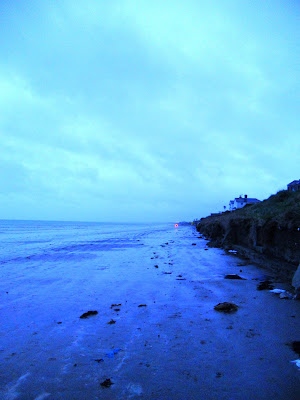 As the year closed in, I went for my last walk on a beach for 2011 in Berttystown, Co Meath, this afternoon.

Four us went for a late lunch in Relish, looking out over the sandbanks onto the long and expansive stretch of the Co Meath ‘God Coast,’ that runs uninterrupted from the mouth of the Boyne at Mornington to the estuary at Laytown.

But even as we were eating, the grey clouds were closing in, and the sea view from our table was being lost in mist and shadow.

Two of us still went for a short stroll on the beach after our meal. The day had come to a close even before year 2011 was brought to a close.

On the road between Laytown and Julianstown, the birds were collecting in the dark on the roadside wires and in the bare branches of the trees. We were back in South Co Dublin in less than an hour.

We had collected The Irish Times, The Guardian and The Economist in O’Donovans before eating. There is some reading to catch up on and a few episodes of Downton Abbey to watch before welcoming in 2012.