Meeting house and public house in a quiet street 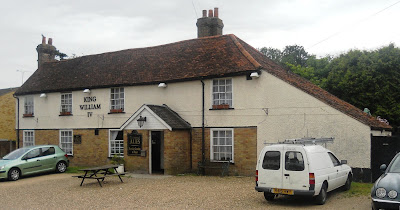 I am told the sunken well and the donkey track are in the grounds of the High Leigh Conference Centre, although I have been unable to find them on each visit.

As I was walking back from the White Swan to High Leigh on Tuesday afternoon [26 June 2012], I stopped to look at the Quaker Meeting House, close to the High Street.

This meeting house was built in 1829. It is built of yellow and grey brick, with stucco dressings. It has a slate roof that is pedimented on the north side with large, stuccoed mouldings. The central, two-fold door has an oblong, crossed-glazing-bar fan, a broad architrave and cornice on large, leaf-ornamental consoles. There are flanking sash windows in moulded frames, single-storey side bays with recessed panels, and side elevations with 6/6-pane sashes. At the front door, there are cast iron foot-scrapers. 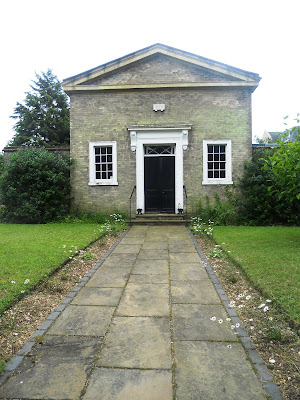 The Quaker Meeting House is truly a Georgian gem, for it was built a year before the death of George IV in 1830.

Some of us ended us ended up there last night – including conference delegates form England, both parts of Ireland, and some with mission and church experience in places as far apart as India, Japan, Brazil, South Africa and Chile.

The pub is a 17th century timber-frame building, with modern brick and roughcast walls, and an old tile roof. It is a two-storey, four-bay building with a four-window range, and the windows have replacement sashes. 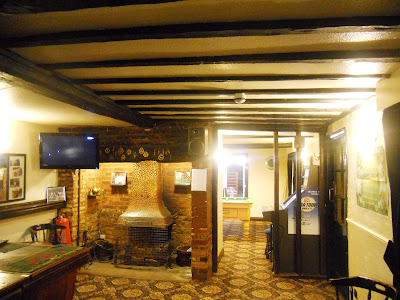 The earliest parts of the William IV have chamfered and stopped floor beams and a central chimney breast with wooden lintel (Photograph: Patrick Comerford, 2012)

Despite the brick cladding and the carpets that cover the wooden floors, the earliest parts of the inn comprise the two west bays to the left of the first photograph at the top of this posting. These two bays have chamfered and stopped floor beams and a central chimney breast with wooden lintel.

The east bays, seen on the right-hand side of that top photograph, now house the pool room and the gents’ lavatories, but were once two separate cottages.

The two chimney stacks, on the east and the west, were remade in the 19th century of yellow stock brick, but the external east stack has a lower half in 17th century red brick. There are later lean-to additions to the rear and to the west of the pub.

And some of us even enjoyed the fact that this was almost a normal English summer’s evening, worth sitting outside to enjoy the balmy atmosphere of the end of the day.