With the Saints through Christmas (6): 31 December, John Wycliffe 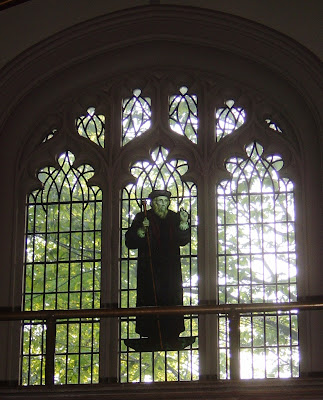 John Wycliffe depicted in a window in the Chapel of Wycliffe Hall, Oxford (Photograph: Patrick Comerford)

John Wycliffe (ca 1330-1384) is remembered as an early Reformer and an early translator of the Bible into English, whose principles led to him losing his academic posts at Oxford. He is honoured in the calendar of Common Worship in the Church of England on this day [31 December], but on 30 December in the Anglican Church of Canada, and on 30 October in the calendar of the Episcopal Church [TEC].

Wycliffe has been called the “Morning Star of the Reformation.” His followers were known as Lollards, are their movement is seen as a precursor to the Reformation. At the end of his life, he completed his translation of the Bible directly from the Vulgate into common English in 1382-1384. In those final years of his life, he increasingly argued for Scriptures as the authoritative source of Christianity, that the claims of the papacy were unhistorical, that monasticism was irredeemably corrupt, and that the moral unworthiness of priests invalidated their office and sacraments.

By 1345, he was at Oxford, where his influential cotemporaries included Roger Bacon, Robert Grosseteste, Thomas Bradwardine, William of Occam, and Richard FitzRalph, later Archbishop of Armagh.

Wycliffe showed an early interest in the natural sciences and mathematics, but concentrated his efforts on theology, canon law and philosophy. He became deeply disillusioned both with the Scholastic theology of his day and with the state of the Church and the clergy.

He was a fellow of Merton College, Oxford, and by 1361, Wycliffe was the Master of Balliol College, Oxford. In the same year, the college appointed him the Rector of Fylingham, Lincolnshire. He had to retire from Balliol, but he continued to live at Oxford, where he had rooms in the Queen’s College.

In 1365, the Archbishop of Canterbury, Simon Islip, appointed him Warden of Canterbury Hall, Oxford, where 12 students were preparing for ordination to the priesthood. That year, Pope Urban V claimed a feudal tribute that dated back to the reign of King John but that had not been paid for 33 years. In response, Parliament declared that neither King John nor any other had the right to subject England to any foreign power. Pope Urban recognised his mistake and dropped his claim. Wycliffe, who served as a theological adviser to the government, wrote a tract on the Pope’s claims.

Archbishop Islip died the following year, in 1366, and his successor, Simon Langham, replaced Wycliffe at Canterbury with a monk. Wycliffe appealed to Rome, but lost his case.

Later, Canterbury Hall would be incorporated into Christ Church, Oxford.

In 1368, he moved from Fylingham and became Rector of Ludgershall in Buckinghamshire. The parish was near Oxford, enabling Wycliffe to keep his connections with the university. Six years later, in 1374, he received the crown living of Lutterworth in Leicestershire, where he remained rector until he died.

In that same year (1374), when France and England were involved in negotiations in Bruges, Wycliffe was one of commissioners sent from England to deal with papal delegates from Avignon about Church complaints.

Soon after his return from Bruges he began to write his great work or Summa Theologiae. In his De civili dominio, he argued that the Church should renounce all claims to temporal dominion.

Sometime between 1372 and 1384, Wycliffe became a Doctor of Divinity, giving him the right to lecture on theology at Oxford.

Wycliffe was summoned before William Courtenay, Bishop of London, on 19 February 1377 “to explain the wonderful things which had streamed forth from his mouth.”

Meanwhile, Pope Gregory XI had issued a bull condemning Wycliffe, and on 22 May 1377 he sent five copies to England from Rome – one to the Archbishop of Canterbury, and the others King Edward III, to the Bishop of London, the Chancellor, and Oxford University. The Pope also denounced 18 theses of Wycliffe as erroneous and dangerous to Church and State. But Edward III died on 21 June 1377 and was succeeded by Richard II, so that the bull against Wycliffe did not become public until 18 December.

In March 1378, he appeared at a church court in Lambeth Palace and for a time he was confined by the Vice-Chancellor of Oxford University in Black Hall. Wycliffe was released on threats from his friends, but was excommunicated.

However, before any further steps were taken against him, Pope Gregory XI died in 1378.

In the space of two years, Wycliffe tried to refute his opponents by writing books dealing with the Church, the office of king, and the power of the Pope. For Wycliffe, the Church is made up of all who are predestined to holiness, including the Church triumphant in heaven, those in purgatory, and the Church on earth. No one who is eternally lost has part in it. There is one universal Church, and there is no salvation outside.

However, his denial of the teaching of the presence of Christ in the Eucharist as expressed in the concept of transubstantiation – not yet an officially defined dogma – lost him his royal protection. In the summer of 1381, when Wycliffe formulated his doctrine of the Lord’s Supper in 12 short sentences, the bishops of England proceeded against him, and the Chancellor of Oxford University had some of the declarations pronounced heretical.

In the midst of the controversy, the Peasants’ Revolt broke out in 1381. Although Wycliffe disapproved of the revolt, he was blamed for it. The Archbishop of Canterbury, William Courtenay, called an ecclesiastical assembly in London in 1382, but as it met an earthquake hit the city. Those present were terrified, but Courtenay declared the earthquake a favourable sign, indicating the earth’s purification from erroneous doctrine.

Of the 24 propositions attributed to Wycliffe, 10 were declared heretical and 14 erroneous. On 17 November 1382, Wycliffe was summoned before a synod at Oxford, and while he was not excommunicated or ejected from his parish, he was forced from his offices at Oxford University.

He returned to his parish in Luttertworth, where he wrote tracts and preached sermons castigating the monks and Pope Urban VI, who disappointed Wycliffe’s hopes of being a reforming pope. He completed translating the Bible directly from the Vulgate into common English in 1382-1384.His last work, Opus evangelicum, was never completed.

While he was celebrating Mass in his parish church on the Feast of the Holy Innocents, 28 December 1384, John Wycliffe suffered a stroke. He died three days later, on 31 December 1384.

A law passed in 1401 extended persecution to Wycliffe’s remaining followers. The Constitutions of Oxford in 1408 banned Wycliffe’s writings and made unlicensed translation of Scripture into English a punishable crime and a heresy.

In 1415, the Council of Constance declared Wycliffe a heretic and decreed that his books should be burned and his remains exhumed. At the command of Pope Martin V, his body was dug up and burned, and the ashes were thrown into the River Swift, which flows through Lutterworth.

Wycliffe was a close follower of Augustine and is seen as one of the first writers to formulate f the two major principles of the Reformation: the unique authority of the Bible, and justification by faith. 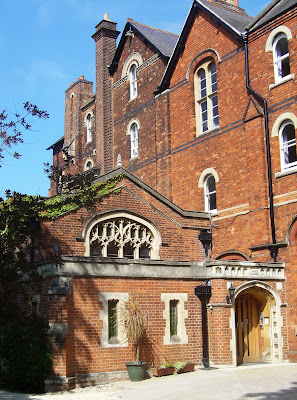 Wycliffe Hall, Oxford, founded in 1877, was named after John Wycliffe and is one of the Evangelical theological colleges in the Church of England.

Wycliffe Bible Translators, one of the largest international organisations dedicated to translating the Bible, is named in honour of John Wycliffe. The Lutterworth Press, a major evangelical publisher in England, takes its name from his parish.

Almighty Father,
you have built up your Church
through the love and devotion of your saints:
inspire us to follow the example of John Wycliffe,
whom we commemorate today,
that we in our generation may rejoice with him
in the vision of your glory;
through Jesus Christ your Son our Lord,
who is alive and reigns with you,
in the unity of the Holy Spirit,
one God, now and for ever.

Faithful God,
who called John Wycliffe to serve you
and gave him joy in walking the path of holiness:
by this Eucharist
in which you renew within us the vision of your glory,
strengthen us all to follow the way of perfection
until we come to see you face to face;
through Jesus Christ our Lord.