Bearing fruit in the vineyard 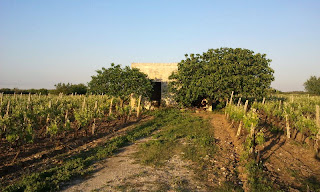 Fig trees in a Mediterranean vineyard

I have chosen Sunday’s Gospel reading for our reflection this morning.

Not to go over what we all may have heard or preached on Sunday, but to take a second look at part of it that may be disturbing on first hearing.

When I was preaching on Sunday [3 March 2013, the Third Sunday in Lent], I gave most my attention to the first part of this reading (verses 1-5). We all know that people often ask why God allows bad things to happen to good people.

In this reading there are two examples. In the first case, it was Galileans at prayer in the Temple who were slaughtered in their innocence, and who ten, sacrilegiously, had their blood mixed with the Temple sacrifices.

At the time, it was a common belief that people’s illnesses, disabilities or early death came as visible reparation for their earlier sins … or perhaps even the sins of their parents or their ancestors.

It was a common belief that allowed an easy way of avoiding the question: why does God allows bad things to happen to seemingly innocent people.

But we do the same today, in many societies. How many people truly believe the poor are poor because they fail to pull themselves up by their bootstraps, or they fail, in the words of one former cabinet minister, to get up on their bikes, or they are lazy? And often when we hear about generations of inner-city poverty, we find an easy “opt-out” by thinking of generations of indolence.

The truth is that many are poor, because of Government policies or lack of policies on spending, social intervention and urban renewal.

And when those who are impoverished die younger or die quicker from infections and diseases, cancers and disabilities, it is not because they are poor, but because our societies decide politically and socially that it is better to spend money on wars and weapons or on giving tax breaks to the rich, rather than tackling poverty and the health problems poverty creates or intensifies.

But Christ also uses another scene at Siloam to challenge these prejudices when he heals the man blind from birth (John 9: 1-38) – why even the man’s parents were embarrassed by his blindness, thinking it cast them in a bad light.

But in concentrating on this story, I spent little time looking at the story of the poor fig tree, which is unique to Saint Luke’s Gospel.

There is a complete contrast between the owner of the field and the gardener.

The owner, who wants a return for his investment, is impatient. After three years, the fig tree has produced no fruit.

The gardener, on the other hand, has no share in the profits. He is going to be paid for his labour, whether that is chopping down the fig tree or tending it until it produces fruit.

The fig tree had more potential than just the figs and fruit it produced. Fig trees are planted in vineyards to shelter the weaker vines. An old and elegant fig tree is a common site in many Mediterranean vineyards and has its own intrinsic value. It may even have vines wrapped around, bearing their own fruit.

It takes much tender care and many years – at least three years – for a fig tree to bear fruit. And even then, in a vineyard, the figs, are not a profit – they are a bonus.

And anyway, even if a tree bears fruit, the Mosaic Law said it could not be harvested for three years, and the fruit gathered in the fourth year was going to offered as the first fruits. Only in the fifth year, then, could the fruit be eaten.

The gardener, who has nothing at stake, turns out to be the one not only has compassion, but has deep-seated wisdom too.

It just struck me as I pondered this parable that the fruit is only going to be profitable in its seventh year.

And in many ways that is what it is like with our students here. Three years studying, three years as curates – it is only from the seventh year on that the Church, which has invested in their training, their growth, their nurturing, will actually see the returns on its investment in them, will see them bearing fruit in the Lord’s vineyard.

And we are the gardeners, called to see their potential, to nurture them, to feed them, to see that they grow in good soil, and to encourage them to blossom, with tender patience and loving kindness.

Merciful Lord,
Grant your people grace to withstand the temptations
of the world, the flesh and the devil
and with pure hearts and minds to follow you, the only God;
through Jesus Christ our Lord. Amen. (Collect, Lent 3)

Canon Patrick Comerford is Lecturer in Anglicanism and Liturgy, the Church of Ireland Theological Institute. This reflection was prepared for a faculty meeting on 5 March 2013.