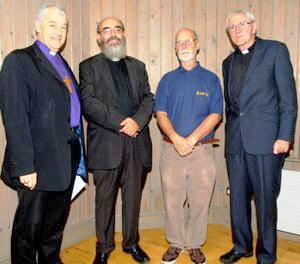 This photograph and the following half-page report were published on p.5 in the Church of Ireland Gazette last Friday (22 November 2013):

A seminar to commemorate the 1913 Dublin Workers Lockout took place recently in Whitechurch parish Old Schools in the grounds of the church.

A large number of people was present to hear of the role played by the Revd R.M. Gwynn and his medical doctor wife, Eileen. Mr Gwynn gave significant support to workers during the Lockout.

He is buried in Whitechurch graveyard and a short act of commemoration took place at the graveside before the seminar, concluding with a wreath being laid by the Archbishop of Dublin, the Most Revd Michael Jackson.

The seminar was designed as a local contribution to the centenary commemorations of the Lockout and was held against the backdrop of the Commemorations Committee established by the General Synod of the Church of Ireland to mark the centenaries of Ireland’s significant historical events between 1912 and 1922.

Three speakers delivered enlightening papers providing a picture of Gwynn and the wider context of the 1913 Lockout. Dr Jackson addressed the subject of ‘Gwynn, the Educationalist’; Canon Patrick Comerford talked about ‘Gwynn, the Priest’; Padraig Yeates of the Irish Trade Union SIPTU gave a talk entitled ‘The Lock Out 1913 and collective bargaining’.

(The full contributions prepared by the speakers can be read on the Dublin and Glendalough Diocesan website at: http://dublin.anglican.org/news/2013/09/Whitechurch-Seminar-Commemorates-RM-Gwynn-and-1913-Lock-Out.php .)