Christmas scenes in the
unique carvings
in Lichfield Cathedral

But putting anticipation aside, it is worth visiting the Cathedral in these weeks before Christmas to see the whole Christmas story – from the Annunciation and the Visitation through the Nativity to the Presentation in the Temple and the Visit of the Magi – told in the colourful triptych that forms the reredos for the altar in the Lady Chapel.

This carved wooden reredos dates from 1895. It is a triptych (three-part) altarpiece with high relief scenes from Oberammergau, the Bavarian town that is better known for its Passion Play.

But the wooden carvings were designed in England rather than in Germany. The Tractarian artist Charles Eamer Kempe (1837-1907) designed the reredos. Kempe was best known in the late Victorian period best known for his stained-glass windows, some of which can also be seen in the cathedral. The Church Historian, Owen Chadwick, says Kempe’s work represents “the Victorian zenith” of church decoration and stained glass windows.

As he worked on the designs for the altarpiece, Kempe was deeply conscious of the history of the cathedral and of the Lady Chapel, with its highly unusual octagonal apse. The Lady Chapel, dedicated to Saint Mary and Saint Chad, dates from the 14th century, and was incorporated into the main part of the cathedral in the 18th century. Kempe kept the dedication in mind as he drew up his plans for the reredos, which was then carved by Oskar Zwink in his family’s famous studio in Oberammergau.

The central panel of the reredos shows a Nativity scene, with the Virgin Mary and the shepherds in the middle, then the Annunciation (upper left), Mary’s visit to her cousin Elizabeth (lower left), the Adoration of the Magi (upper right) and the Presentation in the Temple (lower right). Much of the artwork is gilded with gold leaf while other areas are polychromatic paintwork.

The Annunciation portrayed on a panel on the triptych (Photograph: Patrick Comerford, p 52, Lichfield Gazette)

David, Isaiah, Saint John the Baptist and Saint Chad are depicted on the back of the two doors, which are seen only when the triptych is closed. On either side of the Nativity scene itself are four carved figures: Saint Ambrose, Saint Jerome, Saint Augustine, and Saint Gregory – four of the seven patristic saints who are also carved on the south wall of the cathedral.

For generations, the Zwink family has been associated with the Passion Play, and the influences of the Passion Play can be seen in the style of the figures in the panels. This dramatic influence is more visible in the reredos Kempe and Zwink produced for Saint Andrew’s Church in Burnley in 1898. In Burnley, the central panel depicts the crucifixion, while the four side panels depict the passion like scenes from the Passion Play in Oberammergau.

The Visitation of Mary to Elizabeth depicted on a panel on the triptych (Photograph: Patrick Comerford, p. 54, Lichfield Gazette)

The Presentation in the Temple, carved on a panel on the triptych (Photograph: Patrick Comerford, p. 54, Lichfield Gazette)

Kempe also designed half the windows in Lichfield Cathedral, including the Hacket Window (1901), celebrating the completion of the Victorian restoration, the Barnabas Window (1898), Saint Stephen preaching to the Sanhedrin (1895), and the imposing South Transept window, ‘The Spread of the Christian Church’ (1895). He was also commissioned to restore the Saint Chad’s Head Chapel.

The Visit of the Magi seen on a panel on the triptych (Photograph: Patrick Comerford, p. 54, Lichfield Gazette)

The large ‘Jesse Tree’ window by Clayton and Bell in the North Transept illustrates the Biblical genealogy of Christ, crowned in the upper section of the centre light with the Virgin Mary holding the Christ Child.

As you leave the cathedral, pause to look up at the magnificent West Window, which also shows the Birth of Christ. This window by Clayton and Bell was inserted after the window tracery was redesigned by George Gilbert Scott in the 1860s. The Virgin Mary and the Christ Child are greeted on the right by Joseph and the Archangel Gabriel and on the left by the three wise men bearing their gifts. Below, six smaller panels depict the Annunciation, the Angel’s visit to Joseph at night, the Nativity, the Journey of the Magi, the Magi visiting Herod, and the Flight into Egypt. 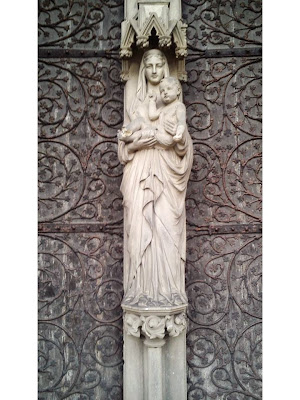 The Virgin Mary stands with the Christ Child, a Christmas scene carved by Mary Grant in the centre of the west door of Lichfield Cathedral (Photograph: Patrick Comerford, p. 54, Lichfield Gazette)

As you leave through the porch to the right of the West Window, stop to see the Victorian statues within the porch which are the work of Mary Grant (1831-1908). There, in the centre of the West Doors, the Virgin Mary stands with the Christ Child. Mary Grant was a granddaughter of Thomas Bruce, Earl of Elgin, ever-remembered for plundering the marbles from the Parthenon in Athens. Her work is unusual for a Victorian woman, for the physical strength sculptors needed made their work a virtually all-male preserve.

At the West Door, Mary Grant’s Virgin Mary supports her life-like infant gently. The Christ Child has one arm raised in blessing. Next to them on the left stands Saint Mary Magdalene, holding ointment, making a clear link between Christmas and the Incarnation and Easter and the Resurrection. 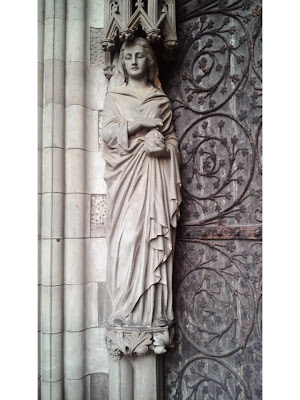 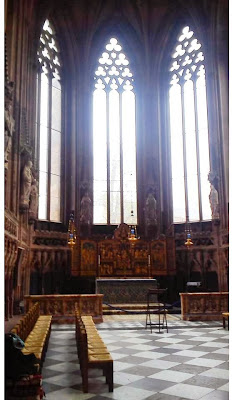 This essay and these photographs were first published in the Christmas 2013 edition of Lichfield Gazette, pp 52-54, in December 2013

Posted by Patrick Comerford at 14:11