High Leigh in Hertfordshire … the venue for this week’s Us conference, ‘The Transforming Gospel’ (Photograph: Patrick Comerford)

His work attracted international support in 2003 through the movie City of God, which told the story of conflict between rival drugs gangs and the police.

He often went to bed to the sound of gunfire. But since then, hopes are growing that the community is moving on from its notorious past. In 2008, a major police operation clamped down on drug dealing, and the police stayed on to patrol the streets. Even so, the community faces many challenges: only 3 per cent of teenagers complete secondary school, while unemployment stands at 25 per cent, and the average income per household is just £50 a month.

Now Nicholas Wheeler has returned to England with his appointment as Rector of the Parish of Holy Trinity and Saint Saviour, Upper Chelsea, three months ago.

Sir John Betjeman once described Holy Trinity as “the Cathedral of the Arts and Crafts Movement.” When his appointment was announced in April, Canon Wheeler said: “I relish the challenge to explore what that reaction against the Industrial Revolution, inspired in the 19th century by the social reformer John Ruskin, and led by the likes of William Morris and Edward Burne-Jones, might suggest for the ministry of Holy Trinity in the 21st.”

Bishop Richard Chartres of London said: “After service in the City of God … Nicholas is bringing a breadth of vision and depth of purpose to beloved Holy Trinity Sloane Square. I am hoping for and expecting great things from this new partnership.”

Meanwhile, the Anglican parish of Christ the King is small but growing and finding effective ways to show and share God’s love. This work is being supported by the Anglican mission agency Us (previously USPG, the United Society for the Propagation of the Gospel), which is supporting the work of the Revd Antonio Terto, who has taken over as the Vicar of the parish.

For five years Father Antonio belonged to a Roman Catholic religious order. He was ordained into the Anglican Church of Brazil in 2012 and continues to practice Franciscan spirituality. Although Anglicans are a tiny minority in Brazil, the church is well regarded locally and something of a community hub. Now, it is hoped that building a community centre will take the church’s local support for the community to a new level. The two-storey centre – to be called the Anglican Space – will offer counselling, skills training and English classes, and will be used by community groups.

But the City of God still faces many challenges. Father Antonio says “there are children, even whole families, living on the streets. There are teenagers with no opportunity to develop their potential or creativity. Senior citizens are overlooked. There is violence against children, especially black teenagers. I have met children who are living with HIV and AIDS. And there are few resources for people with disabilities.” He sees “the Parish of Christ the King as a community of deep faith, seeking to face these delicate situations with love and dedication.”

Canon Wheeler is one of the speakers this week at the annual conference of the Anglican mission agency Us (previously USPG), which is taking place in the High Leigh Conference Centre near Hoddesdon, in Hertfordshire. The conference theme this year is “The Transforming Gospel,” and on Tuesday morning Canon Nicholas Wheeler is presiding at the Morning Eucharist in High Leigh.

Also speaking at the conference is the Revd Dr Miranda Threlfall-Holmes, who is the vicar of a parish on the outskirts of Durham and the Vice-Chair of WATCH (Women and the Church). She is a writer, blogger and historian. Her doctoral research was on the economic and social history of Durham Cathedral Priory (1464-1520).

Before becoming the Vicar of Belmont and Pittington, she was Chaplain and Solway Fellow at University College, Durham, and for a year was Interim Principal of Ustinov College. As a member of General Synod of the Church of England (2007-2012), she was heavily involved in the campaign to open the episcopate to women and men on equal terms.

It was a year ago yesterday [18 July] that the General Synod of the Church of England approved the consecration of women as bishops. Since then, six women have been appointed bishops in the Church of England in the past eight months: Libby Lane, Stockport; Alison White, Hull; Rachel Treweek, Gloucester; Sarah Mullally, Crediton; Ruth Worsley, Taunton; and Anne Hollinghurst, who is to be consecrated as Bishop of Aston in the Diocese of Birmingham on 29 September.

Of course, with each new announcement the news coverage has lessened. But as Bishop Rachel Treweek of Gloucester said about her appointment last March: “I hope this will become something normal. Won’t that be wonderful when, in the best sense, it isn’t newsworthy because we’re women?”

I arrived for the conference this morning on an early flight to Stansted, and I am planning to go to church in Cambridge and spend some time there before catching the train to Broxbourne, the station nearest to Hoddesdon, for preliminary meetings in High Leigh this evening.

The conference proper begins tomorrow afternoon [20 July 2015] with a welcome and introductions with Canon Chris Chivers, Chair of Us Trustees, and opening worship with Canon Andi Hofbauer of Wakefield Cathedral.

At the first session, Janette O’Neill, Us General Secretary, is offering a review of the year. After dinner tomorrow, we have the first of three opportunities to reflect on research into how we communicate ‘Us.’ Night Prayer is being led by Canon Hofbauer, who has been the Precentor of Wakefield Cathedral since 2009.

Tuesday morning begins with the Eucharist led by Canon Nicholas Wheeler. After breakfast, Douglas Yates is introducing the Bray Circle and the Revd Dr Monodeep Daniel of the Delhi Brotherhood Society is leading a Bible study (2 Samuel 13).

Later on Tuesday morning we are being asked: “How is the Gospel good news for women?” This is being led by Canon Delene Mark, Chief Executive of Hope Africa, from the Anglican Church of Southern Africa, and Ms Sheba Sultan from the Church of Pakistan.

This is followed by a debate asking: “What does a world reconciled in Christ mean for men and women?” This debate is being led by the Revd Dr Miranda Threlfall-Holmes and Dr Paulo Ueti, a theologian and New Testament scholar from Brazil.

Five elective workshops are taking place after lunch on Tuesday:

• Journey with Us, Us Global Relations Programme Manager Habib Nader with volunteers from the Us world church placement programme.

• Us together – mission, memories and stories. This is a time to share and explore experiences of the world church and look at how this can help shape future work.

• Asking nicely – an opportunity to critique the promotion of the Us Connect scheme for churches, the Bray Circle membership scheme, and our legacy materials.

• Stronger together – learning how Us and the Anglican Alliance are working in partnership.

The journey continues later on Tuesday afternoon with a second session to reflect on how we communicate ‘Us’.

The Us Council meets after dinner. Once again, Night Prayer is led by Canon Andi Hofbauer, and she is leading Morning Prayer at the start of the day on Wednesday.

We conclude looking at “Our Journey” on Wednesday morning at two sessions, asking about the next steps and exploring new ways to communicate ‘Us’ asking what excites us about the work of Us.

The conference comes to an end with Dr Monodeep Daniel of the Delhi Brotherhood Society presiding at the Closing Eucharist, when the preacher is Deaconess Dr Rachele Evie Vernon, Us Global Relations Theological Adviser.

In between, during gaps in the programme, I hope to have some walks in the beautiful countryside in Hertfordshire and Essex, and I hope to have some time browsing in the book shops in Cambridge on Wednesday afternoon before catching a late night flight back at Stansted Airport. 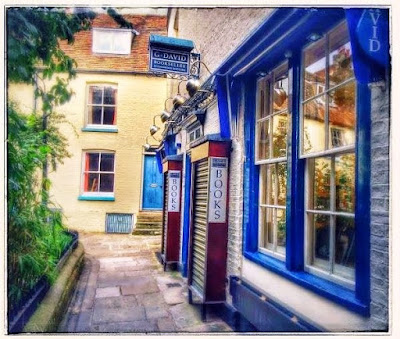 David’s bookshop, dating from 1896, is hidden in a side alley in the heart of Cambridge … I am hoping for time to browse in the bookshops in Cambridge on Wednesday afternoon (Photograph: Patrick Comerford)