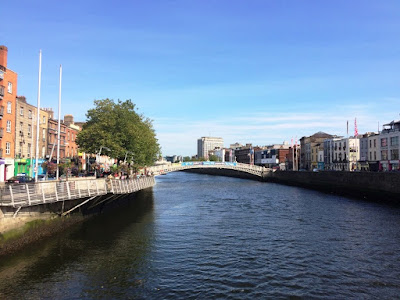 The bright, sunny autumn weather continued on Sunday [27 September 2015], with blues skies and warm sunshine in Dublin for the last of this year’s ordinations in Christ Church Cathedral.

I am working on the final stages of a chapter on preaching and the Eucharist, and it was heartening to be reminded throughout the afternoon that as priests we are ordained to a ministry of both word and sacrament:

Bishop: In your ministry will you expound the Scriptures and teach that doctrine?

And then, soon after:

Bishop: Will you encourage God’s people to be good stewards of their gifts …?

I was robed and in my stall in the cathedral as a member of the chapter, and it is very moving to come down during the singing of Veni, creator Spiritus to join the archbishop and the other priests present in laying hands on all the candidates.

After laying hands on the new priests, the bishop then continues:

“Give to these your servants grace and power to fulfil the ministry to which they are called, to proclaim the gospel of your salvation; to minister the sacraments of the new covenant; to watch over and care for your people; to pronounce absolution; and to bless them in your name.

Later, the bishop clearly links that word “steward” with the ministry of sacrament in the words of the Post-Communion Prayer:

Bishop: Almighty God,
you have chosen and ordained these your servants
to be ministers and stewards of your word and sacrament …

Earlier in the morning, I was also in the chapter stalls for the Cathedral Eucharist, sung by the Cathedral Choir to Judith Bingham’s Missa Brevis (Awake My Soul).

This setting was commissioned for the fiftieth anniversary of the consecration of Bromley Parish Church, Saint Peter and Saint Paul, in 1957 after it had been razed by the force of one German high explosive bomb in 1941.

“I wanted the dramatic progression of the Mass to be about rebuilding,” she said later. Her Kyrie, she said, evokes “walking amid the ruins of the church, desolation, despair.” Echoing TS Eliot, she headed this Kyrie: “A wasteland: the ruins of a sacred building.”

The Gloria unfolds from the “decision to rebuild – a sense of renewed hope.” Her heading is: “The rebuilding begins.”

Her Sanctus enshrines the solemnity of the new church’s consecration, and is headed: “The consecration of the house.”

Her Agnus Dei, she says, turns to “the forgiveness of enemies,” a process led by the rebuilding of trust and the recognition of humanity’s mutual interdependence. The heading reads: “As we forgive them.”

Two of us went to lunch in Wallace’s Taverna on the north bank of the River Liffey, and as we crossed the river back to Temple Bar, the waters of the Liffey were sparkling the afternoon autumn sunshine.<,br />
I strolled through the second-hand book barrows in Temple Bar before returning to the cathedral, where Judith Bingham’s reflections on her setting echoed through my mind again and again as I listened to the questions put to the four new priests before their ordination:

Bishop: Will you be faithful in visiting the sick, in caring for the poor and needy, and in helping the oppressed?

Bishop: Will you p[romote unity, peace and love ….?

These are charges that are not confined to parish ministry, and all priests need to be reminded constantly of those sacred promises.