Kitesurfers and hardy swimmers
in the winter cold at Dollymount 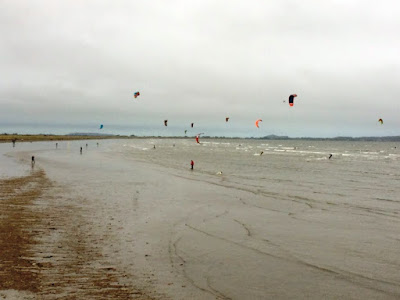 Kitesurfing on the beach at Dollymount this afternoon (Photograph: Patrick Comerford, 2015)

It has been a busy Advent and Christmas season, with Carol services, Sung Eucharists, Choral Evensongs, seasonal sermons, cathedral meetings … as well as dinners, parties, shopping, cards and family visits.

I was preaching at the Sung Eucharist in Christ Church Cathedral this morning, and it was encouraging to see how many people were present this morning, both members of the cathedral congregation and visitors and tourists.

The Sunday after Easter is often known as Low Sunday, because of the low tone to celebrations after the climax of Easter. But it is also associated with the low numbers attending churches on that Sunday too. And the same might be said about the Sunday after Christmas.

Happily, this was not so at this morning’s Eucharist.

As the Communion Motet this morning, the Voluntary Choir sang ‘The truth sent from above,’ often known as the ‘Hereford Carol.’ This carol was collected early in the last century by Ralph Vaughan Williams, Cecil Sharp and other folk song collectors in Shropshire and Herefordshire, and the version the choir sang this morning is the one collected by Vaughan Williams.

Vaughan Williams collected this Dorian mode version of this carol at King’s Pyon, Herefordshire, in 1909 from Mrs Ella Leather, a folk singer. He later used this carol to open his Fantasia on Christmas Carols (1912). 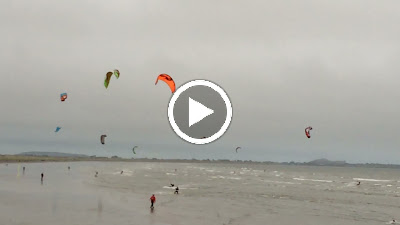 After coffee in the crypt and family visits in Clontarf, two of us decided to clear our heads this afternoon and went for walk along the length of the Bull Wall, with the waters of Dublin Bay to one side and the sands of Bull Island or Dollymount Beach on the other.

It was interesting to see how busy the port is, even on a Sunday afternoon during this extended holiday weekend. It was surprising too to see one or two swimmers braving the cold temperatures, the high tides and the choppy waters this afternoon.

Out on the long stretch of sand at Dollymount Beach, a dozen or more kitesurfers were taking advantage of the high winds along the shoreline.

It is good to get the salt air into my lungs after a few busy days like this.

Brave or foolhardy? A swimmer off the Bull Wall in Dublin Bay this afternoon (Photograph: Patrick Comerford, 2015)

Posted by Patrick Comerford at 18:11