A weekend visit to Adare with
its churches and thatched cottages 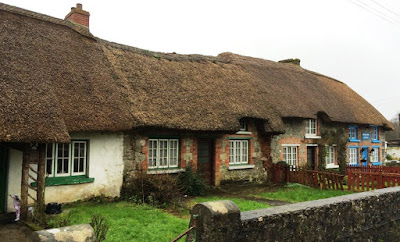 Thatched cottages in Adare, Co Limerick … one of the prettiest villages in Ireland (Photograph: Patrick Comerford, 2016)

During my weekend visit to Saint Mary’s Cathedral in Limerick, and to Saint Flannan’s Cathedral in Killaloe, Co Clare, I stayed overnight in Adare, which is just 16 km south of Limerick City on the Limerick-to-Tralee road.

Adare, which has a population of about 2,500, is one of the prettiest villages in Ireland and is a designated Heritage Town. Although it dates back to mediaeval times, and perhaps even to pre-Anglo-Norman times, the present village is largely an early 19th century creation by the Quin family, Earls of Dunraven.

The first fortress in the area was an early ring-fort, which was later fortified by the O'Donovan family, who were the rulers of the region until the late 12th century. After the arrival of the Anglo-Normans, the fortress passed to the FitzGeralds of Kildare, who built a castle on the site.

The Desmond Castle was built in the early 13th century and became a strategic fortress during the following turbulent years. Adare was developed in mediaeval times by the FitzGeralds of Kildare, and the area remained in the hands of the Earls of Kildare for almost 300 years. Following the rebellion of Silken Thomas in 1536, Adare its castle were granted to the FitzGeralds, Earls of Desmond, who gave the castle its present name.

I was staying in the Dunraven Arms Hotel, which was originally built as a coach house in 1792. This family-run, four star hotel retains old-world charm, and was the 2014 Georgina Campbell Guide Hotel of the Year. 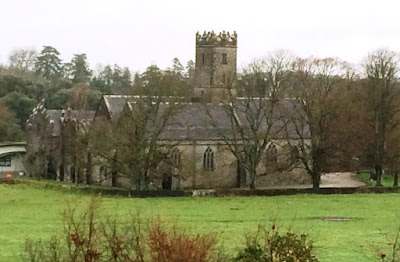 A view from the Dunraven Arms Hotel across the fields towards Saint Nicholas’s Church, Adare (Photograph: Patrick Comerford, 2016)

I woke on Sunday morning to a beautiful view across fields and the river towards Saint Nicholas, the Church of Ireland parish church in Adare.

Saint Nicholas’s Church is just a short walk from the village and stands on the banks of the River Maigue. It was founded in 1316 as an Augustinian Priory by John FitzThomas FitzGerald, 1st Earl of Kildare. The priory was suppressed at the Reformation.

In 1807, the church of the Priory was given to the Church of Ireland as the parish church and was repaired and renovated. In 1814, the refectory was roofed and converted into a schoolhouse. Between 1852 and 1854, a second restoration of the church was undertaken by Caroline, Countess of Dunraven.

It remains the Church of Ireland parish church and is one of the finest examples of a mediaeval Irish church. In the old graveyard, a second church or chapel of ease dates from the 16th century, and several members of the Dunraven family are buried there. 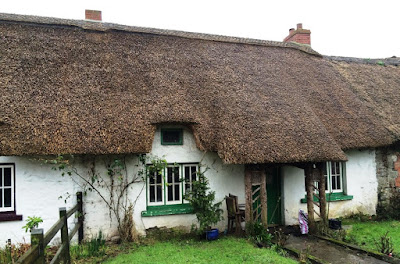 After a breakfast, I took a stroll along Adare’s pretty Main Street. The street is noted for its beautiful stone buildings, thatched houses, mediaeval churches and ruins and the village park.

Many of these thatched cottages and pretty houses are now restaurants, fashionable boutiques and arts and crafts shops. But the Main Street was laid out and the cottages were built in the 1820s by Lord Dunraven for his tenants.

Soon after, the Dunraven family began building Adare Manor in the Gothic style in 1831. 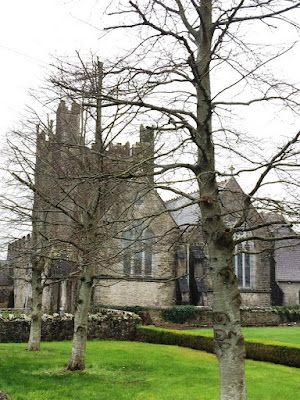 The Roman Catholic parish church in Adare was built as the Trinitarian Priory (Photograph: Patrick Comerford, 2016)

Further down the street, on the same side as the Dunraven Arms Hotel, I stooped to admire the former Trinitarian Priory in Adare. This was the only known Trinitarian monastery in Ireland, and was built for Trinitarian friars who may have come to Adare from Scotland. This order was founded in France during the Crusades to raise ransoms to rescue Christians captured by the Moors.

The priory was built by the FitzGerald family in 1230 but after the priory was supressed at the Reformation the church fell into decay. The abbey was restored in 1811 by the 1st Earl of Dunraven as the Roman Catholic Parish church, and was repaired and enlarged in the mid-19th century. Today it is known as Holy Trinity Abbey and continues to serve Adare as the Roman Catholic parish church.

Adare had a third mediaeval monastic house in the Franciscan Friary on the banks of the River Maigue, although it has never been restored. This looks like many monasteries built in Ireland in the 14th and 15th centuries, and was founded in 1464 by Thomas FitzGerald, 7th Earl of Kildare, and his wife Joan, for the Franciscan Friars of the Strict Observance.

The friary was completed two years later but was suppressed at the Reformation. It remains in ruins, but the surviving walls give a hint of its former elegance. 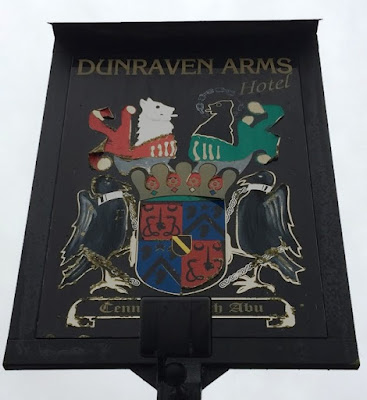 The Dunraven Arms Hotel takes its name from the Earls of Dunraven who lived in Adare Manor (Photograph: Patrick Comerford, 2016)

The title of Earl of Dunraven and Mount-Earl was created in 1822 for Sir Valentine Quin (1752-1824), who also had the titles of Viscount Mount-Earl, Baron Adare and baronet.

Windham Henry Quin (1782-1850), the 2nd Earl of Dunraven, changed the family name from Quin to Wyndham-Quin.

Windham Thomas Wyndham-Quin (1841-1926), 4th Earl of Dunraven was Under-Secretary of State for the Colonies (1885-1886) in Lord Salisbury’s Conservative government. He played a decisive role in land reform in Ireland through the introduction of the Wyndham Land Purchase Act (1903), which gave tenants the right to buy out their landlords. He was also a Senator in the first Irish Senate (1922-1926), which gave him a seat in both the British and the Irish parliament.

The titles became extinct five years ago with the death of Thady Windham Thomas Wyndham-Quin (1939-2011), 7th Earl of Dunraven. He had lived at Kilgobbin House in Adare after Adare Manor was sold in 1982 and since 1987.

Adare Manor across from the hotel was closed, and steel barriers blocked the entrance. The house was sold by Dunraven family in 1982, and in 1987 it was bought by an American businessman, Thomas F Kane.

The Adare Manor Hotel was bought last year by the Limerick businessman JP McManus, his wife Noreen and the McManus family, reportedly for €30 million. But the place is now closed, and many of the contents were sold at a two-day auction a month ago [28 and 29 January 2016].

There were 45 red tub armchairs, curtains, carpets, lamps, lighting, mirrors, paintings and prints. The contents of about 30 bedrooms were purchased by another hotel in a private deal, but the sale included entire contents from bedrooms like the State Room and the Presidential Suite, including the bed in which Bill and Hilary Clinton once slept.

Should they return, the Clintons may have to stay in the Dunraven Arms Hotel. 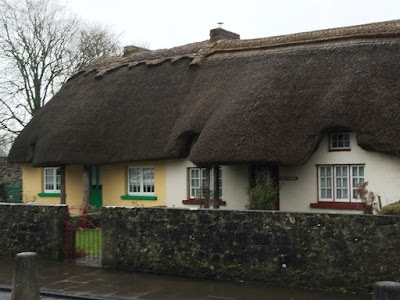 Many of the thatched cottages in Adare are now boutique shops and restaurants (Photograph: Patrick Comerford, 2016)

Posted by Patrick Comerford at 19:49