Walking in the rain on Portmarnock
beach as winter rains continue 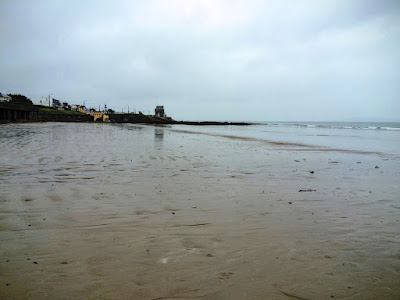 Walking on the beach on my own in Portmarnock this afternoon (Photograph: Patrick Comerford, 2016)

Traditionally, Irish people regard 1 February,the feast of Saint Brigid of Kildare as the first day of Spring. The last of the great wandering bards, Antoine Ó Raifteirí (1779-1835), or Raftery the Poet, wrote about the coming of Spring with the coming of Saint Brigid’s day in words that most Irish schoolchildren can recite:

Saint Brigid’s Day arrived last Monday without bringing Spring with it too, and it felt like winter as four of us went to lunch this afternoon in the Gourmet Food Parlour near Robswall in Malahide.

We had a table by a window looking out onto the coast road, and despite the heavy rain we could see across the inlet at Malahide, with the waves rolling in, as far as the Donabate peninsula, with the towers of Portrane Hospital barely visible in the distance. 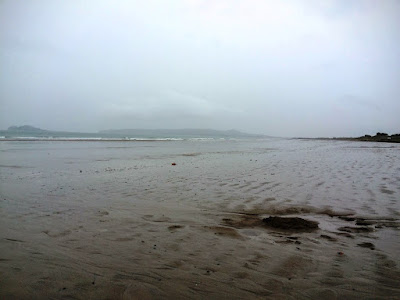 Walking on the wet sands in Portmarnock this afternoon (Photograph: Patrick Comerford, 2016)

Those winter rains were still tumbling down later in the afternoon when I went for a walk on my own on the sand at Portmarnock. The tide was still out, but the sands were wet with the rain, and the beach was deserted.

I was on my own for this short walk in the rain on a beach that is crowded on summer days. I could see as far as Howth, but only one, lone fishing boat from Howth was out on the sea.

On the way to Malahide, a crash on the M50 had closed off sections of the motorway for hours. The Google Maps app on my phone brought us off the motorway and through Blanchardstown, Tyrrellstown and Corduff.

Some months ago, while I was in a taxi to the airport in November, a crash closed one side of the M50 motorway for about seven hours. On that occasion a clever taxi driver ensured I caught my flight to Birmingham, but these crashes regularly expose the vulnerability of this ringroad at the most strategic point of the national infrastructure, and show us how vulnerable Dublin is.

Google Maps is a great app, but drivers ought not to have their phones on while driving. What we really need is to see the NRA develop a proper rapid response strategy for motorway incidents. It is one thing to be half an hour late for lunch, it is distressing, time-wasting and costly to miss a flight.

On the way back on the M50 the problems had been cleared and there were beautiful colours in the sky to the west with a slow and gentle sunset. As Raftery reminded his, when February arrives there is a “grand stretch in the evening.” 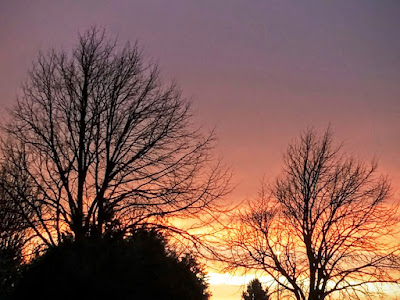 A grand stretch in the evening … a February sunset in Knocklyon this evening (Photograph: Patrick Comerford, 2016)

Since I put it into my head
I shall never stay put
until I shall stand down
in the centre of County Mayo.

In Claremorris
I will be the first night,
and in Balla just below it
I will begin to drink.

To Kiltimagh I shall go
until I shall make a month’s visit there
as close as two miles
to Ballinamore.

Toasting the (non) arrival of Spring ... a glass of Pinot Grigiot in Malahide this afternoon (Photograph: Patrick Comerford, 2016)

Posted by Patrick Comerford at 19:39