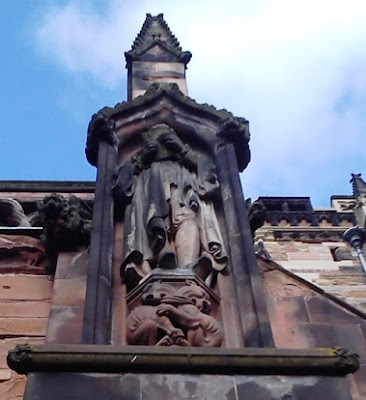 ‘The pensive man never loses himself in crowds, but walks the cloister or frequents the cathedral’ … Samuel Johnson’s statue at the south-east corner of Lichfield Cathedral (Photograph: Patrick Comerford)

There are monuments to Samuel Johnson on the south-east side of Lichfield Cathedral and in Saint Paul’s Cathedral, London, a window commemorates him in Southwark Cathedral, and he is buried in Westminster Abbey. In recent weeks, I have been visiting a number of cathedrals in England and Ireland, including the cathedrals in Lichfield, London, Birmingham, Dublin, Kilkenny, Limerick and Killaloe. But what did Johnson have to say about cathedrals?

In his Life of Milton, Johnson wrote:

“The pensive man at one time walks ‘unseen’ to muse at midnight, and at another hears the sullen curfew. If the weather drives him home he sits in a room lighted only by ‘glowing embers’; or by a lonely lamp outwatches the North Star to discover the habitation of separate souls, and varies the shades of meditation by contemplating the magnificent or pathetick scenes of tragick and epick poetry. When the morning comes, a morning gloomy with rain and wind, he walks into the dark trackless woods, falls asleep by some murmuring water, and with melancholy enthusiasm expects some dream of prognostication or some musick played by aerial performers …

“The pensive man never loses himself in crowds, but walks the cloister or frequents the cathedral.”