Reflecting on the reality of political
violence in Bray this afternoon 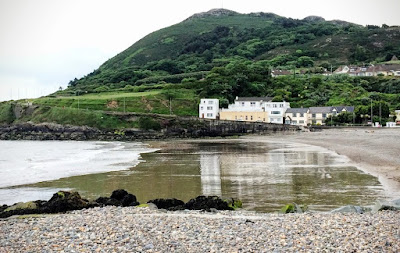 Standing on the beach in Bray today, watching the waves swell up and beat against the pebbles on the shore and the wet patches of sand, I kept on thinking how much we have forgotten about the plight of refugees in the Mediterranean and how still keep on being washed up in large numbers on the shores of Greece.

They have only come to the fore once again in Britain in recent days because of the commitment of the murdered MP Jo Cox to the fighting for justice for Syria and Syrians.

In some ways the discussions about her attacker and his psychiatric ill-health is a put-down for the many people who need psychiatric care. They live in the community but surely they are no more prone to murderous attacks on politicians than those of us who have physical ailments.

The blame for his action must rest squarely on the people who have vile political ideologies and who are happy to use and abuse anyone, whether they are ill or not, to spread their vile. Mental illness does not cause people to commit murder, but a toxic political debate such as this EU referendum can push an unstable person over the edge.

Britain First was formed in 2011 by former members of the British National Party (BNP), and has grown rapidly to become the most prominent far-right group in Britain.

It campaigns on an anti-immigration platform, calling for the return of “traditional British values” and the end of “Islamisation.” One of its slogans is: “Britain is full up.”

Britain First builds its online presence by using social media to campaign issues such as animal cruelty, wearing a poppy on Remembrance Day, or showing support for the royal family, and asking people to “like” its messages. So successful has it been that it now has more than 1.4 million “likes” on Facebook, more than any other British political party.

The group has carried out mosque invasions and so-called “Christian patrols.” In a march in January in Dewsbury, near Jo Cox’s Batley and Spen constituency, 120 Britain First members carried crucifixes and Union Jacks through the town.

At the time, Jo Cox said on Twitter: “Very proud of the people of Dewsbury and Batley today - who faced down the racism and fascism of the extreme right with calm unity.”

Britain First’s leader, Paul Golding, stood against Sadiq Khan in the London mayoral election. When the result was being announced, Golding turned his back in show of contempt for democracy, the electoral process and elected Muslim politicians such as Sadiq Khan. Later, the group announced that it would take up “militant direct action” against elected Muslim officials, including “their day-to-day lives and official functions, including where they live, work, pray and so on.”

What is the difference between Britain First and UKIP? Their policies are the same, their bombastic rhetoric is the same, and they appeal to the same group of voters. 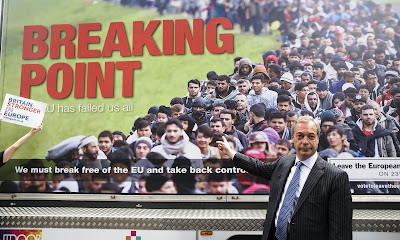 An anti-migrant poster unveiled this week by the UKIP leader Nigel Farage has been reported to the police with a complaint that it incites racial hatred and breaches British race laws.

The poster shows a queue of migrants and refugees with the slogan “Breaking point: the EU has failed us all.”

Twitter users have pointed out the poster’s similarity to Nazi propaganda footage of migrants shown in a BBC documentary from 2005.

The photograph Farage used this week is one of migrants – mainly Syrian refugees – crossing the Croatia-Slovenia border last year, and was taken in Slovenia by a Getty Images staff photographer Jeff Mitchell. The only prominent white person in the photograph obscured by a box of text.

The rising, sickening attitude to refugees and migrants is seen in the disgusting way some England and Wales fans mocked and jeered refugee children in French streets this week, chanting and throwing small coins at them.

These men see nothing contradictory in the fact that they are supporting their countries in a European competition. In France, they are as much foreigners as the children they are jeering. Yet, when they come home, presumably these men will vote as UKIP directs them or join in Britain First marches.

Last month, the Archbishop of Canterbury, Justin Welby, said Nigel Farage is guilty of “inexcusable pandering to people’s worries and prejudices, that is, giving legitimisation to racism.” This needs to be repeated over and over again.

If there was one light note in the launch of this disgusting poster this week, it is provided by the woman who managed to jump in behind Farage, unnoticed as she photo-bombed herself holding up a poster saying: “Britain Stronger in Europe.” 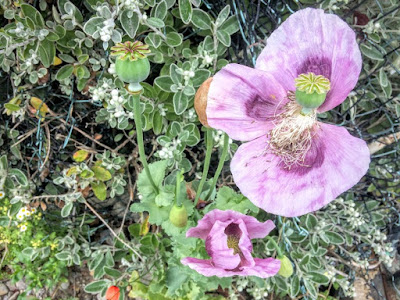 A glimmer of hope and new life in a garden in Bray, Co Wicklow, this afternoon (Photograph: Patrick Comerford, 2016)

Posted by Patrick Comerford at 20:10