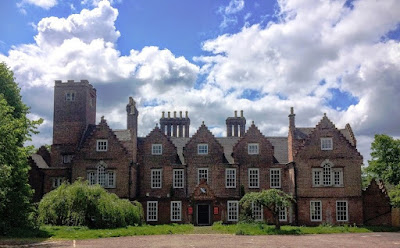 The Moat House on Lichfield Street, Tamworth, in summer sunshine … the Comberford family ancestral home is to reopen as a pub next month (Photograph: Patrick Comerford, 2016)

The Moat House in Tamworth, one of the ancestral homes of the Comberford family, is to reopen its doors next month after the lease has been taken on by a local businessman, according to a report in this week’s edition of The Tamworth Herald [28 July 2016].

This week’s report by Helen Machin, which describes the house as “Tamworth’s iconic Moat House,” says the Moat House is to reopen its doors next month.

The report, which The Tamworth Herald says is exclusive, follows months of speculation and considerable interest in the Grade II* listed building.

The lease has been taken on by Martin Young (35), a local businessman who also owns the Three Tuns pub in Fazeley. He plans to re-open the Moat House in mid to late August.

He said: “This is a massively exciting project for me, next to the castle, it’s the most famous building in Tamworth.”

He told The Tamworth Herald: “I plan to return it to its former glory, previously it has been used as a pub and restaurant, and eventually I hope to host high profile events and weddings there.”

In a similar report this morning [29 July 2016] on the site Insider Media, he tells Storm Rannard: “I am delighted to have taken over such a prestigious venue which I feel has significant potential.”

He adds: “The Moat House presents a unique opportunity to provide a wonderful social hub for the people of Tamworth to enjoy. My management team and I will provide a beautiful venue which will welcome both laid back diners and those who wish to simply enjoy our range of drinks.” 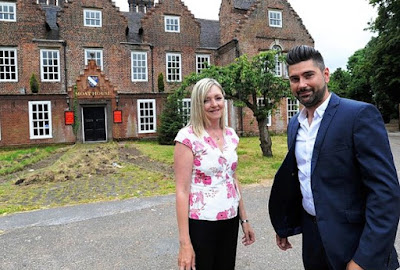 Martin Young, who has taken on the lease of the Moat House, with Lynne Dudley, the new manager (Photograph: Tamworth Herald, 2016)

Martin Young, who has been in the pub trade for 19 years, has been doing much of the general labouring and painting himself, according to The Tamworth Herald. However, he has called in specialist contractors for some of the work on the house on Lichfield Street, Tamworth.

He told Helen Machin: “Structurally everything is in good condition, but it needs a lot of love, a lot of attention and a lot of paint! But it’s a stunning building.”

Martin Young comes to the Moat House with a wealth of experience. The Three Tuns in Fazeley was a finalist in the Tamworth Business of the Year and the winner of the Enterprise Inns Midlands Community Pub of the Year last year [2015].

Work is well under way at the Moat House, with work currently concentrating on the ground floor and the extensive gardens by local tradesmen.

The pub will be open to serve drinks next month, then shortly afterwards it is hoped that the kitchen renovations will be complete and that food will be served too. Martin Young said: “We’re paying great attention to detail, I want to make sure that every bit is right and we don’t run before we can walk. We’re keen not to destroy the character of the building.”

The Moat House has been closed since 2014. The lease was sold in a deal brokered by specialist business property adviser Christie & Co.

Charles Jones, business agent at Christie’s Birmingham office, said: “The Moat House is a fantastic property which is steeped in history and has significant potential. Martin recognised the opportunity and quickly placed an offer which suited the vendor’s needs.”

He added: “Martin has an excellent reputation for running pubs that are valued at the heart of the local community, and we’re delighted that he has taken on the Moat House with plans to operate the business as an important local asset. I expect that this site will be very successful and wish him the best of luck in his new venture.”