Inside a cave at Silver Strand in Co Wicklow watching the waves on the beach (Photograph: Patrick Comerford, 2016; click on image for full-screen resolution)

I try to go for a walk on a nearby beach at least once in a weekend, if not twice. It’s good for my lungs and good for my feelings about two conditions, Sarcoidosis and a Vitamin B12 deficiency.

Because I live so close to the M50, places like Bray are often no more than 15 minutes’ drive from home, and it is only little further to get to the beaches at Greystones and Kilcoole, further south in Co Wicklow, or beaches to the north at Malahide, the Velvet Strand at Portmarnock, Balcarrick Beach at Donabate, Portrane, Rush, Loughshinney, the two beach at Skerries, and Laytown, Bettystown and Mornington in Co Meath.

They are all within such easy reach, that I really have few excuses for not getting out for a healthy walk on a beach, taking in the fresh sea air and enjoying the sound of the sea and the waves lapping against the sand and the pebbles.

But I was surprised by the list of “50 Great Irish Beaches” in the ‘Weekend’ Review’ in The Irish Times on Saturday [30 July 2016]. I am familiar with only 20 of the 50 beaches listed by Catherine Murphy.

Please don’t get me wrong, though. I’m not quibbling. I have long been vocal about the pollution on Bettystown Beach and the refusal of Meath County Council to stop its use as a car park, and the erosion of the beach in Courtown is symptomatic of the problems facing many beaches on the Wexford coast.

The list made me realise how limited I have been in my exploration of Irish beaches. So, after I had presided and preached at the Sung Eucharist in Saint John’s Church, Sandymount, this morning [31 July 2016], two of us decided this afternoon to go for a walk on one of the beaches on the list of ’50 Great Irish Beaches’ that I had not visited previously.

Silver Strand beach and caves in Co Wicklow came in at No 14 on the weekend list in ‘The Irish Times’ (Photograph: Patrick Comerford, 2016; click on image for full-screen resolution)

Silver Strand beach and caves in Co Wicklow came in at No 14 on the list in The Irish Times. Catherine Murphy wrote: “Caramel sands, fragrant honeysuckle and intriguing waves await those who walk down the steep steps to the beach.”

The beach lies just 3 km south of Wicklow Town, but it is a private beach, and access is through one of two neighbouring caravan parks perched on the cliffs above Silver Strand, in picturesque rural settings.

The park has been owned and operated by four generations of the Webster family and has been catering for the needs of mobile home owners for over a century. For over 40 years, the park has been run by Harry Webster with his wife Jean and their children.

The park has also been a location in a number of media productions, including TV series such as Love/Hate, Moonfleet, The Vikings, Camelot, George Gently, Fair City and ITV’s Primeval, and several feature films including Frankie Starlight, The Escapist, Driftwood and The Count of Monte Cristo.

A little further south, Wolohan’s Caravan and Camping Park has been run by the Wolohan family for over 70 years. This is a 22-acre site set in rural farmland and with spectacular coastal views.

During the week, both parks charge an entrance fee of €6 a day for a car. But this is a bank holiday weekend in Ireland and we paid €10 for the car and access to the beach and the facilities at the Silver Strand Caravan Park or Webster’s.

I know Irish people object to charges like this, but when you compare this with parking charges in high rise inner city parking lots in Dublin that offer no facilities, the charge seemed reasonable and goes towards maintaining a beach that truly deserves its place on that list of ‘50 Great Irish Beaches.’

From the top of the steps leading down to the beach, Silver Strand looks like a small bay. But as we made our way down, we were surprised how large the bay is, with plenty of space for families to stake out their own place with a degree of privacy.

Silver Strand is a collection of three small beaches, enclosed by a maze of caves that brought me back in my mind’s eye to a visit to Matala on the south coast of Crete almost two years ago [26 August 2014].

The tide and the waves were gentle, the sand was soft, and it seemed possible to walk out safely into the water for quite a distance. Inside, the caves acted as echo chambers, resounding with the sound of the waves on the beach.

Eventually, we climbed back up the steps, turning back every now and again for wistful glances at the beach below, before heading on to a late Sunday lunch in the Avoca Café at the Mount Usher Gardens, in the part of Co Wicklow that is known as the ‘Garden of Ireland.’ 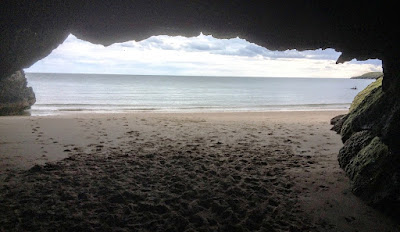 Memories of the caves at Matala in a cave at Silver Strand, Co Wicklow (Photograph: Patrick Comerford, 2016; click on image for full-screen resolution)