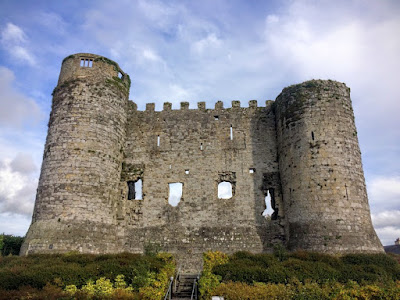 During my rambles through Carlow on Saturday afternoon [15 October 2016], I visited Carlow Castle, now standing ruins near the east bank of the River Barrow.

As a strategic river crossing, Carlow was the scene of a number of important battles and the Anglo Normans recognised its importance when the river was first fortified in the 1180s by Hugh de Lacy followed by building the great Carlow Castle in the early 13th century.

Carlow Castle is thought to be have been built by William de Marshal, Earl of Pembroke and Lord of Leinster, between 1207 and 1213.

At the time, the site of the castle was a small island on the River Barrow. It was a French-style keep with four towers. The design is rare for a castle in Ireland and it may have been copied from western France, then also under Norman control.

The castle was the very first of its kind in Ireland, a towered keep, with a huge rectangular tower was surrounded by four smaller three-quarter-circular towers at the corners of the rectangle. Originally it was a rectangular block, containing the castle’s principle rooms protected by cylindrical towers at its corners.

Historians and archaeologists today doubt that Carlow Castle supported the traditional function of a keep, serving as a refuge of last resort. Instead, it deliberately diverted from the contemporary standard in England and continental Europe. For example, there was no towered curtain, no gate house, and no undivided great hall. Similar castles of the same period were erected in both Ferns and Terryglass.

The inner castle measured 16 by 9.2 metres (52 ft × 30 ft), the towers were15 feet (4.6 m) in diameter, and the walls were 9 feet (2.7 m) thick. The inner castle had three storeys and timber was used for the upper storeys. The long west wall provided stairways and two latrines. The latrines indicate that the space was divided. The entrance door was in the first floor, but this is now broken out.

When William Matrshall died in 1219, his estate was divided between his five daughters. The His eldest daughter Maud inherited the Lordship of Carlow, comprising of all of present-day Co Carlow, along with much of Co Wexford, large parts of Co Laois and the manor of Ballysax in Co Kildare. The title of Earl Marshal and the ownership of Carlow Castle passed to Maud’s eldest son, Roger Bigod, 4th Earl of Norfolk.

Between 1283 and 1292, the 5th Earl of Norfolk began an extensive restoration of Carlow Castle. Some 12,000 wooden shingles were shipped up the Barrow from Dunleckney woods to cover the roof of the Great Hall. Both floors of the tower containing the Exchequer House were refurbished with 130 timber boards from Tullow. The treasurer’s office and court were at ground level, while the wooden chests of money and records were kept upstairs. The kitchen and castle prison were rebuilt too.

The castle was handed over to the crown in 1306, and in 1312 it was granted to Thomas Plantagenet.

During the 14th century, Carlow grew in importance. In 1361, King Edward III’s son, Prince Lionel, Duke of Clarence, moved the main organs of government from Dublin to Carlow, including the King’s Bench and the Court of Exchequer. The plan was to give the English control of the River Barrow, one of Ireland’s great highways, and enable them to strike at the ‘king’s Irish enemies,’ including the O’Mores, the O’Connors and other families, and for over three decades Carlow was effectively the capital of Ireland.

But Carlow stood on the edge of the Pale, and it was a prime target for attacks. Eventually, the King’s Bench and the Court of Exchequer were moved back to Dublin in 1394.

In the centuries that followed, there were numerous attacks on the castle, including attacks led by Art MacMurrough Kavanagh (1405), Silken Thomas (1534) and Rory Oge O’Moore (1577). However, none of those attacks inflicted anything more than a dent in the castle with walls that were 9 ft wide walls and towers rising to over 60 ft.

Carlow Castle was confiscated by the crown in 1537 because the Earls of Norfolk were absent. James Butler, son of the Earl of Ormond, was appointed Constable of Carlow Castle, and the Butlers would retain the lease of the castle through the rest of the Tudor age until the Earls of Thomond succeeded them in 1604. 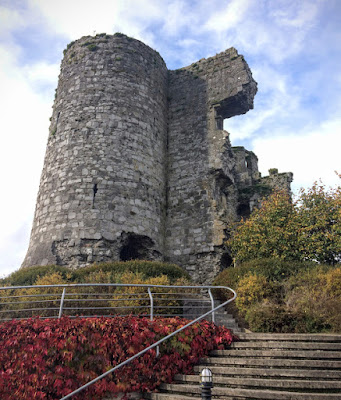 Carlow Castle … passed to the Earls of Thomond in the early 17th century (Photograph: Patrick Comerford, 2016)

In 1604, the castle was leased from the crown by Donough O’Brien, 4th Earl of Thomond. The lease from King James I said O’Brien was to hold his ‘estate in fee-simple for ever of the Manor of Catherlogh, at the yearly rent of £23. Reserving and excepting out of the said grant the Castle of Catherlogh. The said Donough and his son and the longer liver of them to have the Constableship of the said Castle of Catherlogh, with all the entertainments as Robert and William Hartpole lately enjoyed.’ However, the king reserved the ownership of the castle for himself and his ‘successors.’

The Earls of Thomond held onto Carlow Castle until the Confederate Wars, when it was attacked by Sir Morgan Kavanagh (1641) and then by General Thomas Preston (1647). The castle was confiscated by the Confederates, but it was captured in 1650 by Cromwell’s Deputy and son-in-law, General Henry Ireton, who released 500 prisoners held captive there. It passed back to the Earl of Thomond, and following the Restoration in 1660, Henry O’Brien, 7th Earl of Thomond, was confirmed in his possession of Carlow Castle.

In 1719, Thomond appointed a Dublin lawyer, James Hamilton, to serve as chief steward of his Irish estates, including Carlow. The 8th and last Earl of Thomond died in 1741 and his Irish estates passed to his nephew by marriage, Percy Wyndham, who adopted the name O’Brien. 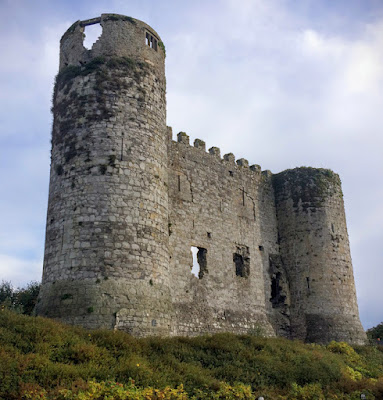 Dr Middleton invested £2,000 in rebuilding and remodelling of the castle in an attempt to convert it into a private Maison de Santé or ‘lunatic asylum.’ During his renovations, Middleton believed he could gain valuable extra space by building tunnels under the castle and reducing the thickness of the walls by using blasting powder.

But the results were not as he planned. He placed explosive charges at the base of the castle on Sunday 13 February 1814, and then demolished all but the western wall and two towers.

The castle area was excavated for the first time ever in 1996 by a team of archaeologists under the direction of Dr Kieran O’Conor of the Office of Public Works. He published a summary of his findings in the 1997 Autumn edition of the journal Archaeology Ireland.

Today, two battered towers and the outer face of the west wall are all that remain of Carlow Castle today. Despite this, the castle remains one of the most prominent features on the River Barrow and it is designated a National Monument.