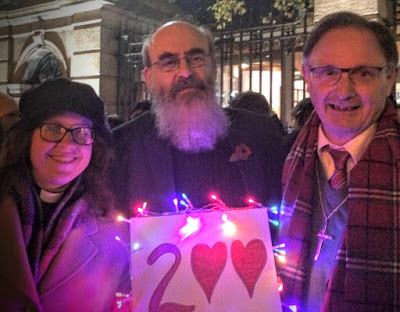 Patrick Comerford
At the end of a long working day, I joined the vigil outside Dail Eireann this evening [2 November 2016], organised by the ‘Not On Our Watch’ campaign.

The vigil took take place as the Dáil (Irish Parliament) began to debate on the call from the ‘Not On Our Watch’ campaign for Ireland to accept and resettle 200 unaccompanied children from the refugee camp, The Jungle, in Calais.

The French government recently demolished most of The Jungle. However, almost 1,500 children remain in precarious circumstances in the camp. The campaign says the Irish government must represent the wishes of its people, pointing out that 800 Irish people last year offered to give a home to unaccompanied refugee children.

‘Not On Our Watch; is supported by the Irish Congress of Trade Unions, many NGOs, including the Irish Refugee Council, the Children's Rights Alliance, the Immigrant Council of Ireland and Sister Stan Kennedy. They have called on the Irish government to immediately act to help 200 of those children and relocate them to Ireland.

The campaign asked children to make ‘2♥♥’ signs and to hold them up for politicians to see as they entered the Dáil for the debate, and to light candles.

The speakers at this evening’s vigil included Sister Stanislaus Kennedy, Caoimhe Butterly who recently visited the Jungle Camp, and Dr Fergus O’Farrell, lay leader of the Methodist Church in Ireland.

Posted by Patrick Comerford at 21:37