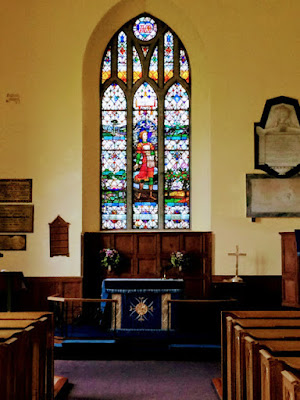 Archdeacon Charles Warburton (1781-1854), who was Rector of Rathkeale (1813-1855) and Chancellor of Limerick throughout the first half of the 19th century, is probably my only American-born predecessor in these parishes.

Warburton, who is buried in a vault in the churchyard in Rathkeale, was born in New York in 1780. His father, Charles Warburton (1754-1826), later became Bishop of Limerick and then Bishop of Cloyne. But his family background was even more colourful. His father was born Terence Mongan in Co Monaghan, the third and youngest son of Dominic Mungan (1715-1774), a blind bard and harpist originally from Co Tyrone.

Terence Mongan trained in France as a Roman Catholic priest, but changed his name to Charles Mongan when he was appointed a chaplain of the 62nd Regiment of Foot in the British army during the American War of Independence. While he was still living in New York, he married Frances Marston on 18 February 1779 in New York.

She came from a well-connected New York family, the daughter of Nathaniel Marston and Anna Van Cortland. Frances was probably his second wife, but details of his first wife are not known. Three of their four sons – Garnet, Augustus Frederick, Charles – were born in New York, while their fourth son, John Warburton (1786-1873) was born in Monaghan town in 1786 shortly after the family returned to Ireland.

Following his return from North America to Ireland, Charles found quick promotion in the Church of Ireland. In 1789, he was appointed Rector of Tullah and Creagh in the Diocese of Ross and a prebendary in Saint Flannan’s Cathedral, Killaloe.

In 1790, when he was still known as Charles Mongan, he was appointed Dean of Ardagh. Two years later, by royal warrant, he adopted the surname of Warburton, with the forenames Charles Mongan, in 1792.

When he changed his name he identified Alicia Warburton as his cousin-german, but it is not known who she was or who this Warburton family were. It has been suggested they may have been descended from one of the three brothers, Richard, George and John, who moved to Ireland in the 17th century.

In 1800, he became Dean of Clonmacnoise and Precentor of Saint Patrick’s Cathedral, Dublin. He was appointed chaplain to the Lord Lieutenant, the Duke of Bedford, in 1806. But in the same year, through Bedfor’s patronage, he was named as Bishop of Limerick, Ardfert and Aghadoe, and he was consecrated in Saint Patrick’s Cathedral on 13 July 1806. Later, he moved to Co Cork as Bishop of Cloyne in 1820. He died on 9 August 1826, aged 72, and was buried three days later in Cloyne Cathedral.

His daughter Selina, who died shortly before him in 1826, is buried near him. Another daughter, Charlotte Ann Warburton (1789-1842), married William Wray Maunsell (1782-1860), Archdeacon of Limerick, Precentor of Cloyne, and for some time Vicar-General of Limerick.

Two of Bishop Warbutron’s sons became priests in the Diocese of Limerick while he was bishop. His third son Charles became Chancellor of Limerick and Rector of Rathkeale, while his fourth son, John, became Precentor of Limerick.

Archdeacon Charles Warburton was born in New York in 1781, and was educated at Trinity College Dublin, graduating BA (1803), MA (1807), LLB and LLD (1826). Soon after his ordination, he was appointed Archdeacon of Tuam in 1806. In 1813, he was appointed Chancellor of Limerick and Rector of Rathkeale. He held these appointments along with being Rector Clonmel, Co Tipperary, in the Diocese of Lismore, and continued to live in Rathkeale for the next four decades.

On 3 June 1824, Charles Warburton married Alicia Bunburry Isaac (1803-post 1861) of Holywood House, Co Down. The groom 43, and the bride was 21; the wedding was conducted by his father, Bishop Warburton. They had two sons, Charles and Augustus-Frederick, and a daughter, Maria.

Charles died at the Glebe House in Rathkeale, on 12 December 1855 at the age of 74. He is buried in the family vault in the churchyard at Holy Trinity Church, in Rathkeale.