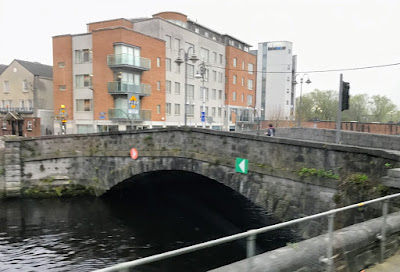 The General Synod of the Church of Ireland is meeting in Limerick for three days this week, beginning with an opening Eucharist in Saint Mary’s Cathedral yesterday (Thursday 4 May) and continuing until tomorrow (6 May).

This morning, for my fourth choice, I am looking at Baal’s Bridge, linking Mary Street and Broad Street, and just two or three minutes’ walk from Saint Mary’s Cathedral.

As a city at the mouth of Ireland’s longest river, the Shannon, Limerick’s bridges are of vital importance, connecting the north bank and Co Clare, with the south bank and Co Limerick. The principal bridges include Thomond Bridge, Sarsfield Bridge, built originally as Wellesley Bridge, and Shannon Bridge, built in 1980s. But this morning I am looking at one of the older bridges in the city, known as Baal’s Bridge.

Local folklore says the first bridge here was built by a man named Baal, from Singland, near Castletroy, who was converted to Christianity by Saint Patrick.

There may have been a bridge on this site, spanning the Abbey River, since 1174. The early Baal’s Bridge was an important four-arch bridge on this site from about 1340. Until the mid-18th century, it was the only link between the Englishtown and the Irishtown.

The old bridge was included in grants to the Earl of Shannon, whose family name was Boyle. So the bridge could also have been called ‘Boyle’s Bridge,’ corrupted later to ‘Ball’s Bridge’ or ‘Baal’s Bridge.’ In the early 19th century, there was some silly speculation that the bridge was named after the pagan god Baal. 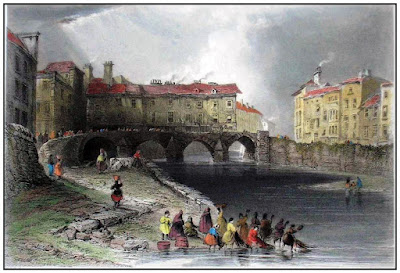 The old building had a row of houses incorporated into it, but by the early 19th century these houses were beginning to collapse. In addition, the old bridge was blocking traffic between the canal and the tidewater of the River Shannon.

The modern structure is a single-arch bridge built in 1831 by the Limerick-based architect brothers James and George Pain, who also designed many church buildings in Co Limerick including Castletown Church and old rectory, the former rectory in Askeaton, and Holy Trinity Church, Rathkeale.

This pleasant bridge has little decoration but displays quality stonework. It is a single-arched, hump-back, limestone bridge. It has quarter round breakwaters with stepped conical coping, a segmental-arch with rusticated rock-faced voussoirs, squared and coursed limestone ashlar walls with platband to the base of the parapet. There is ashlar limestone coping above reaching an apex. The curved abutment walls terminate with a rusticated rock-faced limestone pier to the quay walls with capstones.

A plaque on the bridge reads: ‘This bridge was erected by virtue of an Act of the XIth of Geo.e the IV. The Rt. Honble. Thos. Spring Rice MP for the city of Limerick. Commenced taking down the old bridge Nov. 1830. The new bridge finished Nov. 1831. JA & GR Pain Architects.’

Another plaque reads: ‘The ancient bridge of four arches which occupied this site was taken down and this bridge erected at the expense of the new Limerick Navigation Company incorporated 1830 – Chas. Wye Williams Esqr. Chief Director. JA & GR Pain Architects.’

Building the bridge improved the route eastwards to Dublin, and the bridge is identified as Ball’s Bridge on the first edition Ordnance Survey of Limerick City (1840-1841) and on the 1872 edition.

Baal’s Bridge and the quays along the Abbey River in Limerick yesterday Photograph: Patrick Comerford, 2017)

The oldest artifact of Fraternal Masonry in Ireland, and one of the oldest masonic artifacts in the world, is the Baal's Bridge Square, on which the date 1507 is inscribed. The brass square was recovered from Baal's Bridge in Limerick during reconstruction in 1830, and appeared to have been deliberately placed under the foundation stone of the old bridge. It is inscribed with the phrase, "I will strive to live with love and care, upon the level and by the square." http://www.freemasonsnorthmunster.com/Baal's_Bridge_Square.htm