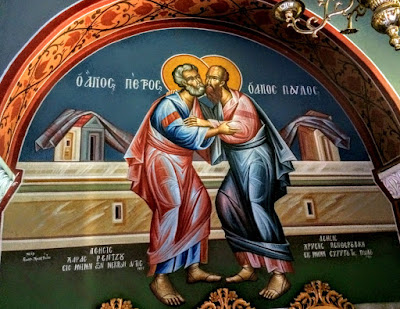 The Apostle Peter and the Apostle Paul in a fresco in the Church of the Four Martyrs, Rethymnon (Photograph: Patrick Comerford)

May I speak to you in name of God, + the Father, Son and Holy Spirit. Amen.

There is a wonderful contrast in our Gospel reading and our Epistle reading this morning between the Apostle Peter, who gets it wrong, and the Apostle Paul gets it right.

Last week [27 August 2017], in our Gospel reading, we saw how Saint Peter could get it right with his confession of faith, a rock-solid faith that had firm foundations.

This week, Saint Peter becomes a stumbling block because he thinks Christ has come to defeat those he sees as the enemies of the people, and he wants to share in the victory he hopes Christ will win. From rock to stumbling block in the space of a week.

On the other hand, Saint Paul, who once used rocks and stones in another way – at the stoning of the first, early Christian martyrs – now provides us with his own concise summary of Christianity faith, life and love. It reads like his own retelling of the Sermon on the Mount, or Christ reading in the synagogue in Nazareth (see Luke 4: 18-22).

Saint Paul tells us: ‘Let love be genuine; hate what is evil, hold fast to what is good; love one another with mutual affection; outdo one another in showing honour (Romans 12: 9-10). 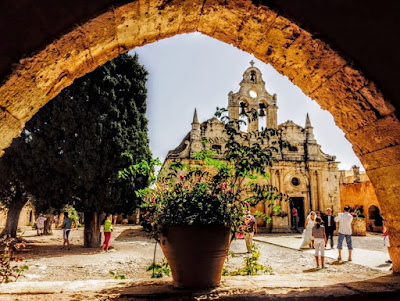 A summer wedding in a monastery in Crete … but should love last longer than the ‘Summer of Love’? (Photograph: Patrick Comerford)

This time 50 years ago, we were coming to the end of the ‘Summer of Love.’ All last week, in the background on television soaps like EastEnders and on late night radio shows, they have been playing Scott McKenzie’s hit from that summer in 1967, ‘San Francisco’ or ‘Be sure to wear flowers in your hair.’

It was the No 1 hit in Britain for a full week from 9 August 1967, displacing the Beatles and ‘All you need is love,’ and it was No 1 until the beginning of September. It was also a No 1 hit in Ireland 50 years ago for a week in September 1967.

The words have no lasting poetic or literary value. The song was written in just 20 minutes and was written for a purely commercial reason – to promote the Monterey International Pop Music Festival that summer.

But the song was a success. All across the nation, as the words of the song predicted, there were people in motion. Thousands of young people came to Monterey and thousands more descended on Haight-Ashbury in San Francisco throughout the late 1960s.

Scott McKenzie’s song has been called ‘the unofficial anthem’ of the counter-culture movement of the 1960s, including the Hippie, Anti-Vietnam War and Flower Power movements. It never reached No 1 in the US charts, but it was one of the best-selling singles of the 1960s across the world.

Half a century later, the Summer of Love looks wilted and faded. It sent out mixed messages about promiscuity and psychedelic drugs. It was brash and immature. But it also encouraged a whole generation to make appropriate connections – how love for one another is not just enough, how we must connect love for others with love for the wider world.

There are different kinds of love. But, sometimes, we are afraid to, we are threatened by, exploring what we mean by love.

Perhaps we feel too embarrassed to explore what we mean by love because, in some Victorian way, we think this involves private emotions and feelings that should not be discussed in public or in polite company.

Perhaps we return to teenage feelings of blushing and being unable to find appropriate mature language to discuss what love truly means beyond our own emotions.

Perhaps because of past experiences, we can confuse attention with affection, affection with love, and so go on doing things to gain attention so that this compensates for a lack of affection and for not being fulfilled in our needs to be loved.

Few of us grow up being taught how to think about love and what it is, in its broader, theological, spiritual and psychological meanings.

What does the Apostle Paul mean by love in this morning’s New Testament reading?

The Belfast-born writer CS Lewis (1898-1963) is best known as the author of the Chronicles of Narnia, the Screwtape Letters and Mere Christianity. But in his last few years, while he was Professor of Mediaeval and Renaissance English at Cambridge (1954-1963), he wrote The Four Loves (1960).

In this book, written in 1960, CS Lewis identifies the four loves as: affection (στοργή, storge), which he calls the humblest love and which is unmerited; friendship (φιλία, philia); eros (ἔρως); and caritas or agape (ἀγάπη).

In this morning’s reading, Saint Paul draws on three of these words, so that he talks about love in all its fullness. He talks about ἀγάπη (Romans 12: 9), and the need for it be genuine, without duplicity. He refers to the word στοργή, unearned or unmerited love, when he talks about φιλόστοργος (verse 10), honouring one another and loving without counting the cost. He talks about φιλαδελφία (philadelphía), mutual love for one another that is so much more than the affection described in the English translation and so much wider in scope than ‘brotherly love’ which is often used instead (verses 10 and 12).

He gives a balanced and considered approach to what love is. And yet there is not one word in it about marriage, sex or gender.

Rather than offering mere words that label love, Saint Paul provides practical examples of how love is expressed, how it is not just a feeling but is only genuine when it is put into action.

He tells me that love is mutual, shows honour, is the best way to serve God. I must rejoice, be patient, pray for others, give to others, welcome strangers, bless those I see as threats and as enemies and never to curse them.

I am to live in peace with all, and let God take care, in God’s own way, of those who do me wrong. I am to feed the hungry, give something to drink to those who thirst, I am to respond to evil with good.

What a different Church we would have today if these were our priorities when it comes to mission.

What a different world we would have today if these values shaped the political manifestos of every politician and party.

The story in our Old Testament reading (Exodus 3: 1-15) is a reminder that God’s love is expressed in just the same ways that Saint Paul describes the love that we should have and that reflects God’s love.

When Moses comes into the presence of God on Mount Horeb or Mount Sinai, long before God tells Moses his name, God tells him he sees the misery of the people, that he hears the cry of the oppressed (verses 7), that he knows their suffering (verse 7), that he wants to deliver them from slavery and to bring them to freedom, that he wants what is best for them (verse 8).

He emphasises that he has heard their cry (verse 9), and he wants them to be free.

In freedom, and only through their own choice, can they worship God freely, become free to be consumed in his love.

It is only then, after a long experience and a long dialogue, that God reveals God’s name, ‘I am who I am’ (verse 14), ‘I am’ (Ἐγώ εἰμι ὁ ὤν). God makes himself known in his promises of love, and then, only then, does he reveal his name. First of all, he says what he does, then he says who he is. And he is who he is, faithful for ever.

God’s love for us, like the bush that is blazing on the mountain, never burns out. It is a flame that is never quenched, that never burns up.

Later, back on this mountain, God is going to tell Moses who God is once again, ‘… merciful and gracious, and abounding in steadfast love and faithfulness, keeping steadfast love for the thousandth generation, forgiving iniquity and transgression and sin …’ (Exodus 34: 6-7).

Those words are echoed in Saint Paul’s words in our Epistle reading.

In a lecture on that book by CS Lewis some years ago in Cambridge, the great Orthodox theologian Metropolitan Kallistos Ware spoke of the Holy Trinity as the model of mutual love, and the fountain and source of love. He said if God is love (John 4: 8), then God cannot be one person loving himself, and a circle of two persons would be closed and exclusive.

The Trinity shows us that love should not only be mutual, but that it should be shared. The doctrine of the Trinity is a way of saying that God’s eternal being is self-giving.

God is God, and we are truly human, because of our ability to relate to others, to love others. We are what we are only in relation to other persons. There is no true person unless there are two or three persons in communication with each other.

If we keep it all to ourselves, it is not love. When we put love into action it becomes genuine. It rejoices and is patient, it looks out for the needs of others, it welcomes the stranger. It hopes, it prays, it rejoices with those who rejoice, and weeps with those who weep. It does not repay evil with evil, it lives in peace with all, it gives food and drink to those who are hungry and thirsty, without discrimination, and it overcomes evil with good. The Burning Bush, an icon by Mikhail Damaskinos (ca 1585-1591) in the Museum of Christian Art in Iraklion, Crete (Photograph: Patrick Comerford, 2017)

(Revd Canon Professor) Patrick Comerford is Priest-in-Charge, the Rathkeale and Kilnaughtin Group of Parishes. This sermon was prepared for Sunday 3 September 2017.