Childhood memories from
Cappoquin in ‘The Guardian’ 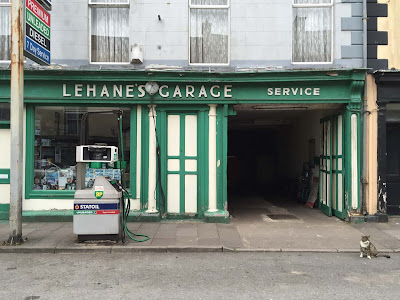 A selection of his photographs has been assembled and edited by the Irish-born writer and journalist Richard Conway for the Guardian project ‘Cities’ and ‘City Exposures’ which is supported by the Rockefeller Foundation.

This selection of photographs went online early yesterday [8 February 2018] under the title ‘Last orders: Ireland’s vanishing quirky shopfronts – in pictures.’ The previous afternoon, coincidentally, I had blogged in a similar fashion about a shopfront in Askeaton, Co Limerick, that has many of the charms found in the shopfronts in this collection of photographs.

It is interesting that only one of the photographs – Frank’s Fancy Goods on North Frederick Street, Dublin – is from a city, and the rest were taken in small provincial towns.

Both Greehy’s Bar in Lismore and Lehane’s Garage in Cappoquin look just as I remember them from my childhood days, when I was on my grandmother’s farm near Cappoquin.

When he was researching this project, Richard Conway read one of my blog postings on a return visit to Cappoquin, and he asked me for my childhood memories.

He has quoted me this week in this way:

‘This garage was a pit-stop when I was on my grandmother’s farm in the 50s and 60s,’ says Patrick Comerford, a Canon Precentor who grew up near Lehane’s of Cappoquin. The still-operational family garage opened in 1949. ‘It looks the same half a century later,’ he says. 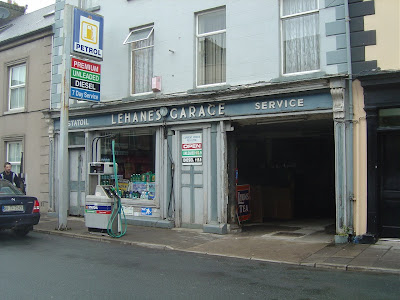 Even Lehane’s Garage on Cappoquin’s Main Street looks and smells the same as it did 50 years ago (Photograph: Patrick Comerford, 2009)