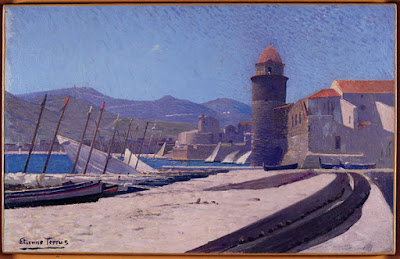 The French painter Étienne Terrus (1857-1922), who lived most of his life in Roussillon, is seen as one of the precursors of Fauvism. During his life, he worked closely with many of the artists who worked in Collioure in the south of France at the beginning of the last century, including George-Daniel de Monfreid, André Derain, and Henri Matisse.

Although Terrus lapsed into obscurity for a time, he was rediscovered in the late 20th century.

So, after a visit the week before last [17 May 2018] to Collioure, the coastal resort where Terrus and Matisse had worked, it seemed appropriate to our friend that on our way back to Ste-Marie-Le-Pen we should visit Elne, the town where Terrus was born, did much of his work, and died. 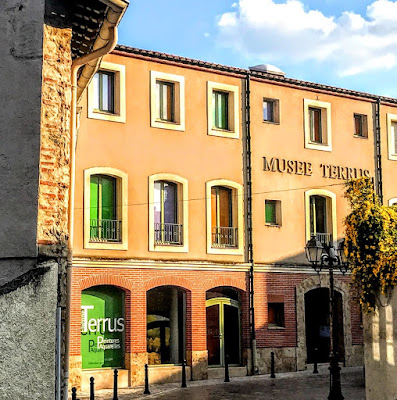 The Musée Terrus in Elne opened in 1994 (Photograph: Patrick Comerford, 2018)

The Musée Terrus, a museum dedicated to his work, opened in his home town of Elne, near the French border with Spain, in 1994. Then 20 years ago, a major exhibition of what were believed to be his major works, Le Roussillon à l’origine de l’Art Moderne, was held in Perpignan in 1998.

However, when we arrived in Elne that Thursday evening, the Terrus Museum was closed. Initially we thought this was because we had arrived too late in the day. But soon we were told how in recent weeks it was discovered that more than half the collection in the museum, 82 paintings, have been identified as counterfeit works.

The council in Elne bought the paintings, drawings and watercolours for about €160,000 for the museum over a 20-year period. Some paintings were bequeathed by collectors, others were bought through fundraising efforts. But staff at the museum were not aware of the forgeries until a visiting art historian alerted them earlier this year.

The Étienne Terrus Museum commissioned the art historian Eric Forcada to rehang its collection following the recent restoration of the building. During his assignment, Forcada discovered that 82 paintings – or about 60 percent of the museum’s holdings – were not painted by Terrus.

Forcada said he noticed the works were fake almost immediately. ‘On one painting, the signature was wiped away when I passed my white glove over it,’ he told the Guardian.

‘At a stylistic level, it’s crude,’ Forcada said, referring to the fakes. ‘The cotton supports do not match the canvas used by Terrus. And there are some anachronisms.’ For example, some of the paintings show buildings built after Terrus had died, France 3 said.

The art historian informed the region’s cultural minister and convened a panel of experts, who confirmed his suspicions and agreed that 82 of the 140 paintings and watercolours that have been on display in the museum for more than two decades were not painted by Terrus.

The news was announced a few weeks ago as the museum was opening following a renovation. Local people are shocked, including the Mayor of Elne, Yves Barniol, who has apologised to people who have visited the museum in good faith.

‘Étienne Terrus was Elne’s great painter. He was part of the community, he was our painter,’ the mayor told the Guardian. ‘Knowing that people have visited the museum and seen a collection, most of which is fake, that’s bad. It’s a catastrophe for the municipality.’

‘I put myself in the place of all the people who came to visit the museum, who saw fake works, who took a ticket of entry, whatever the price,’ he said.

The mayor has now opened an investigation into the forgeries and he insists those responsible will be caught. ‘We’re not giving up,’ he has told journalists.

The town hall has filed a complaint against those who ordered, painted, or sold the fake paintings. A legal complaint has been filed, the fakes have been seized by police and French police have launched an investigation into the alleged forgery and fraud.

Police also believe other museums may have been similarly duped; they suspect an organised ring. It is now thought that works by other regional artists in other locations near Perpignan and Collioure may also be fakes. 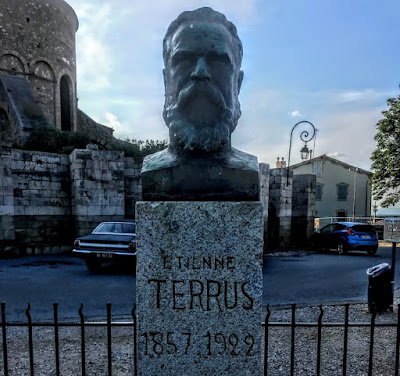