Today is the Seventh Sunday of Easter. It is a sort of in-between day. This day comes between Ascension Day and the Day of Pentecost, it is a day of doubt and deliberation for the disciples, caught between awe and wonder, the wonder of the Ascension the previous Thursday, and the awe of the descent of the Holy Spirit on Sunday next, the Day of Pentecost.

Imagine how Saint Matthias might have felt: the first time round, he was not good enough to be among the Twelve, but Judas was. The second time round, his name is not mentioned first; instead, the first name to come forward is that of Joseph called Barsabbas, who was also known as Justus. But nobody ever remembers him, and his saintly life has passed into oblivion. I hear very few boys being called Barsabbas, as in: ‘Hey Barsabbas, pass the ball over here.’

And then, to compound matters, nobody has the foggiest idea who Saint Matthias was, before or after his election. His name, identity and life story have been forgotten, apart from making him the patron saint of alcoholism and smallpox, and of a few small towns. We are not even sure where or how he died, or where he is buried.

This reading from the Acts of the Apostles tells us that Saint Matthias is the Apostle chosen by the remaining 11 of the 12 to take the place of Judas following his betrayal of Christ and his subsequent death (Acts 1:15-26).

The 120 assembled believers come forward with two nominations: their first choice is Joseph Barsabbas, or Joseph Justus. It may only be an afterthought that someone suggests the name of Matthias.

And then, they cannot make up their minds. Instead, they cast lots, and the lot falls to Matthias. I doubt any of us would be happy to hear we have been elected to any role in life by tossing a coin, drawing straws or rolling a dice as others pray about whether we are suitable or qualified.

But it seems I have spent the last four days doing nothing but vote: a full day of voting in London at a meeting of the trustees of the Anglican mission agency USPG on Wednesday, and three days of voting at the General Synod of the Church of Ireland, on Thursday, Friday and Saturday.

The voting in London was important in terms of the future of USPG, which has a new general secretary, the Revd Duncan Dormor, and is about to confirm the appointment of a new chair of trustees, John Neilson, at a council meeting in July.

The voting in Armagh directly affects the life and future of this diocese. We voted on proposals that prepare the Church for the possibility of amalgamating the Diocese of Limerick, Killaloe and Ardfert with the Diocese of Tuam, Killala and Achonry.

We have not been amalgamated, yet. But this vote means that when one or other of our bishops resigns, retires, moves on or dies, the electoral college for that diocese will be suspended.

How we have a say in electing our new bishop or bishops is now going to be more complicated.

Nor should it ever be by lot: tossing a coin, rolling a dice, drawing straws, or, like Grand National Day, sticking a pin into paper with eyes blindfolded.

But being informed did not mean I was necessarily going to be wise. I also needed to seek God’s will, and prayed each morning before each meeting, before each day’s voting.

That does not mean I got it right each day. And even if I was right, it does not mean that I was on the ‘winning side’ in each vote. But it does mean I had to respect the vote, the process, and the views of those I disagree with, even if I think they are thoroughly wrong – and I expect them to respect me and to respect my conscience too.

If that mutual respect breaks down, then the whole process of voting, of democracy, loses the confidence of all involved.

I have good reason to suspect that Barsabbas is named in our reading this morning because he respected and accepted the choice of Matthias. I cannot imagine he would be named if he had gone off in a huff, if he had bad-mouthed Matthias afterwards, if he had decided to return to the synagogue and the Pharisees or another Jewish tradition.

We are faced with a major vote on the future direction of Irish society later this month [25 May 2018]. It is a vote not just about private ethics but also about public morality.

Everybody agrees – and this is not meant to be a pun – that this referendum is going to be life-changing and life-altering.

But there are some things that sadden me about the referendum campaign. I think it is fair to say that many campaigners, on each side, are not listening to each other. There has been a paucity of debate. Debate involves both speaking and listening, hearing and being heard. However, it seems that the argument on each side is often characterised by people rehearsing pre-referendum positions, characterising the other side in the debate by the most extreme arguments put forward on each side rather than listening to the more rational argument put on each side, and by trying to paint people into corners.

It is not extreme to want to protect all human life, from conception to death. Nor is it extreme to argue that a woman’s life needs to be protected and that every child should be a loved child.

But at the extremes, we have people who think human life begins at conception, but who have no problem with being proponents of the death penalty or sympathising with Donald Trump’s nuclear madness; and people who vegans and pacifists, but who think the conceived child’s life has no value until the infant is born.

These are extreme positions, and I too may be in danger of exaggerating.

During this referendum campaign there are many hurt people who are too hurt to allow their voices to be heard publicly. They are living once again through moments from the past that continue to hurt, and for which there is no healing.

But after this referendum, there are going to be many hurt people, who feel they have not been listened to, and many triumphant people who will all too easily forget the hurt and divisions that referendums like this inevitably create.

Be informed. Read all the material that comes your way, especially the impartial material from the Referendum Commission. Do not end up on the day rolling a dice, or using your pen like a pin on Grand National Day.

Be respectful. Remember that other people, including people in your own family or your own workplace may vote differently, but for very good moral and ethical reasons.

Be prayerful. It is not just enough to think and ponder on the issues. These are major ethical and moral issues that are going to effect Ireland for a full generation. Pray for God’s guidance on 25 May. Indeed, sometimes we hear the voice of God in what others have to say.

Be a voter. Democracy comes at a price, and there is no point in me moaning about the present state of society if I am not willing to vote, even when I consider none of the choices being offered reflects my hopes. Second best is always better than what is going to be the worst.

Continue to have hope. Things are never as they should be, as they ought to be. This time between Ascension and Pentecost is a reminder that we always live in the in-between time. Nothing is going to be perfect until the Kingdom comes. But in the meantime we try to be signs of what the kingdom is going to be like in how we show our love for one another.

And so, may all we think, say and do be to the praise, honour and glory of God, + Father Son and Holy Spirit. Amen.

‘The lot fell on Matthias; and he was added to the eleven apostles’ (Acts 1: 17) … Christ and the twelve apostles in the East Window in Saint Flannan’s Cathedral, Killaloe (Photograph: Patrick Comerford, 2018) 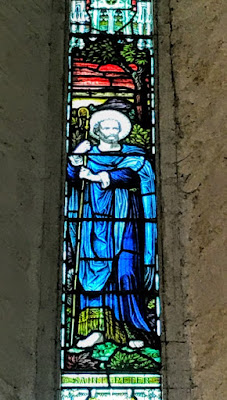 Peter stood up among the believers … and said, ‘Friends, the scripture had to be fulfilled’ (Acts 1: 15) … Saint Peter depicted in a window in the north nave in in Saint Flannan’s Cathedral, Killaloe (Photograph: Patrick Comerford, 2018) 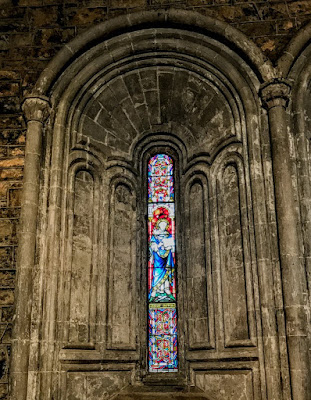