The Dutch Church in Austin Friars:
from Augustine to the Reformation 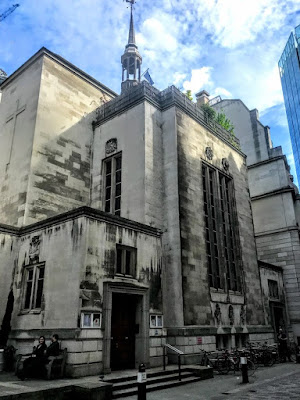 The Dutch Street in Austin Friars is the oldest Dutch Reformed church in the world (Photograph: Patrick Comerford, 2018)

If the Reformation is described at times as a rediscovery of the writings of Saint Augustine, then it seems either historically appropriate or an irony of history that the Dutch Church in London is at Austin Friars, on the site where the Augustinian friary stood in the City of London from its foundation in the 1260s until its dissolution in 1538.

Austin Friars and the Dutch Church are signalled by signs at what seems to be a narrow passageway off Broad Street, between the Bank of England and Liverpool Street Station. But stepping through this archway is an invitation into stories of the Princes in the Tower and pretenders to the throne, Thomas Cromwell and Wolf Hall, the Reformation and an early Reformation Archbishop of Dublin, and refugees fleeing religious persecution in the 16th and 17th centuries.

The Augustinians first arrived in England around 1249, and the Augustinian Friary or Austin Friars was founded in the 1260s by Humphrey de Bohun on his return from the Seventh Crusade.

At its height, the friary had about 60 friars, although the numbers fluctuated over time. Austin Friars also housed a house of studies for students who aspired to go on to Oxford, Cambridge or one of the major continental European universities.

The friary church at the centre of the complex had a three-aisled nave, floored in Purbeck marble, and a two-aisled choir. The altar was probably dedicated to Saint Augustine. The mediaeval portion of the church of Saint Peter the Poor was incorporated into the friary church as the south aisle. There were several chapels, dedicated to Saint Thomas, Saint John the Baptist, Saint Catherine and the Virgin Mary.

The friary covered an area of about 2.2 ha (5.5 acres). A church stood at the centre of the friary precinct, with a complex of buildings behind it providing accommodation, refreshment and study space for both friars and visiting students. A large part of the friary precinct was covered by the friary gardens that provided vegetables, fruit and medicinal herbs.

Austin Friars was favoured by the aristocracy and wealthy merchants as a place of worship and as a place of burial. The pretender Perkin Warbeck, who claimed to be Richard of Shrewsbury, the younger of the Princes in the Tower and son of Edward IV, was buried in the church in 1499 after his execution on Tyburn Hill.

Some of the precincts and land immediately adjoining the priory were to build rented tenements that were occupied by many notable figures, including Erasmus and Thomas Cromwell, King Henry VIII’s principal official.

Thomas Cromwell’s house in Austin Friars is the setting for a number of scenes in Hilary Mantel’s historical novels, Wolf Hall and Bring Up The Bodies. 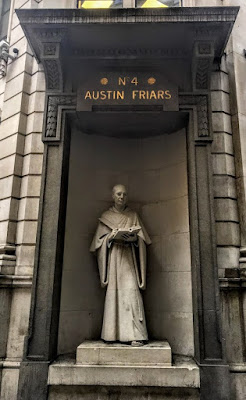 A statue of Saint Augustine in Austin Friars … a reminder of the Augustinian past (Photograph: Patrick Comerford, 2018)

In 1526, the Cambridge scholar and Augustinian friar Robert Barnes (1495-1540) was punished for heresy at Saint Paul’s Cathedral nearby. He was the Prior of Austin Friars, Cambridge, and was sent to Austin Friars in London after had performed his public penance at Saint Paul’s and in the Fleet Prison.

George Browne (1536-1554), the Prior of Austin Friars at the Reformation, was later Archbishop of Dublin. The friary was dissolved in November 1538 on the orders of Thomas Cromwell. The City of London failed in its efforts to buy the friary church from the Crown in 1539.

Thomas Cromwell had obtained more friary land to build one of the largest private mansions in London. However, his house was seized after his fall from power and execution in 1540. It was sold off along with the friary precinct, and much of this was later demolished. His mansion became the Drapers’ Hall.

The City of London tried once again to buy the friary church from the Crown in 1546 but again was rebuffed.

The church served briefly as a Catholic chapel for Italians. But on 24 July 1550, a Royal Charter in the name of King Edward VI granted the community of ‘Germans and other strangers’ in London the use of the nave in the friary church as the ‘Temple of the Lord Jesus.’ The charter was granted ‘notwithstanding that they do not conform with the rites and ceremonies used in our Kingdom.’

In this way, the nave of the church became the first official nonconformist chapel in England under a Polish-born minister, Jan Łaski (John a Lasco), who had founded a preaching house for a group of Protestant refugees mainly from the Low Countries.

Many members of this congregation had fled from Frisia, which is now divided between Germany and the Netherlands. This connection gave the church its modern name of the Dutch Church and the Dutch language is still used there for services.

The rest of the church was turned into a storehouse for corn, coal and wine, the monuments were sold off for £100, and the lead was stripped from the roof.

When it was incorporation, the church had four pastors: two for the Dutch people and two for the French-Walloon people, who by the 1580s began using Saint Anthony’s Chapel in Threadneedle Street.

By 1570, the Dutch community was the largest group of expatriates in London. They numbered 5,000 out of the total population of 100,000 in London at the time. About half of the Dutch immigrants in London were Protestants who had fled the Flemish Low Countries because of religious persecution. Others were skilled craftsmen, including brewers, tilemakers, weavers, artists, printers and engravers, who came to England for economic opportunities. The engraver Martin Droeshout, known for his 1623 portrait of William Shakespeare, was among the Flemish Protestant migrants who arrived in London.

The choir, tower and transepts of the church were demolished in 1600.

At the end of the 17th century, the arrival of William of Orange in 1688 brought a second wave of Dutch emigrants to London. This second group included noblemen, bankers, courtiers, merchants, architects and artists.

A fire destroyed the rest of the church in 1862, and it was rebuilt in the decades that followed.

On the night of 15-16 October 1940, just a decade before the Dutch Church celebrated its 400th anniversary, the mediaeval building was completely destroyed by German bombs. Fortumately, the church’s collection of rare books, including Dutch Bibles, atlases and encyclopaedias, had been moved out of London for safekeeping a day before the bombing raid. 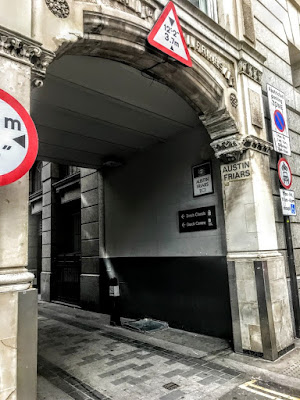 Austin Friars on Bond Street … an invitation into the stories of friars and reformers (Photograph: Patrick Comerford, 2018)

The church was rebuilt again in 1950-1954. The foundation stone of the new church was laid on 23 July 1950 by 10-year-old Princess Irene of the Netherlands. The new church, design of Arthur Bailey, was completed in 1954. The new building is a concrete box frame, externally clad in Portland stone.

The Dutch Church in Austin Friars (Nederlandse Kerk Londen), is the oldest Dutch-language Protestant church in the world, and as such is known in The Netherlands as the mother church of all Dutch Reformed churches. The church was designated a Grade-II listed building 20 years ago in 1998.

The church celebrated its 450th anniversary in 2000. The minister of the Dutch Church, the Revd Joost Röselaers, confirmed in 2014 that the church is able to perform weddings for same-sex couples.

The collection in the church library includes a multilingual Bible published by the Plantin Press of Antwerp in 1569-1571, and a 1649 atlas by Willem Blaeu of all the cities in the Low Countries. The manuscript collection and original charter are kept in the London Metropolitan Archives.

The church remains active today, with weekly Dutch-language services, confirmation classes, and meetings for a variety of groups. The church engages in outreach work within the Dutch community in London, including ministering to the elderly, and is home to two registered charities, the Netherlands Benevolent Society and the Dutch Centre. 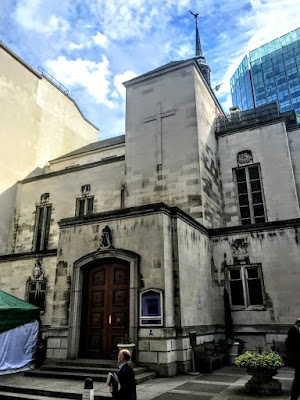