Stories of wine, saints and monks
at Wineport Lodge on Lough Ree 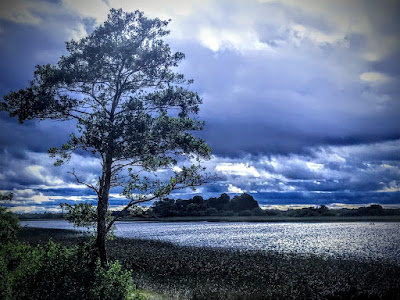 I am staying for a few days at Wineport Lodge 5 km north Athlone, with a room looking out onto the shores of the inner lakes of Lough Ree on the River Shannon.

This hotel by the lakes in a tranquil setting in Co Westmeath began as Wineport Lakeside Restaurant 25 years ago, when it was opened by husband and wife Ray Byrne and Jane English in 1993. The building was substantially upgraded and expanded in 1996 to accommodate daytime trading and business meetings, and the Lodge first opened for residents in March 2002.

Since then, Wineport Lodge has grown in reputation as an award-winning restaurant and hotel. It is a member of Ireland’s Blue Book, is listed in their guides by Georgina Campbell and John and Sally McKenna, and has been the host for many series to The Restaurant Show both on RTÉ and TV3. Wineport Lodge was among the TripAdvisor Travellers’ Choice Awards 2017 for Ireland’s Top 25 Romantic Hotels.

Each room has a name associated with wine, such as Tuscany and Chianti. The room I am staying in is named ‘St Julien,’ which is known for its red wine in the Bordeaux region. It takes its name from Saint-Julien-Beychevelle and is one of the six communal appellations in Médoc. 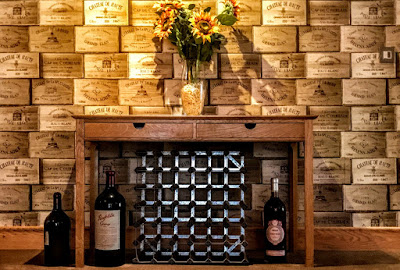 Wine is the theme throughout Westport Lordge (Photograph: Patrick Comerford, 2018)

But the name Wineport predates the reputation this place has with reviewers and connoisseurs.

The association of this part of the Midlands and the wine trade does back to 542 AD, according to local lore.

When Saint Ciaran had studied for some years in Clonard and on Aran, he returned to his native Midlands to begin a monastic foundation and initially settled in a place later called Iseal Chiaran, 3 km east of Lough Ree. The name of Ballykeeran, a nearby local village, means ‘the home of Ciaran.’

Later, Saint Ciaran founded another monastery on Hare Island, and from there he moved south to Clonmacnoise, where he founded his most famous monastery and seat of learning.

From the earliest times, there was always a demand for wine in Ireland, which was never a wine-producing country. The wine trade was usually with France, but also with Spain. Early writings mention wine being imported from Gaul or France to Limerick, and then being brought up the River Shannon to Clonmacnoise.

The townland of Wineport is said to take its name, Port an Fhiona in Irish, from a sheltered place on the lakeshore at Lough Ree at which the wine imported from France was brought ashore.

Wine continues to arrive at Wineport today, but its of a very different quality, I am sure, and from a wider variety of sources. 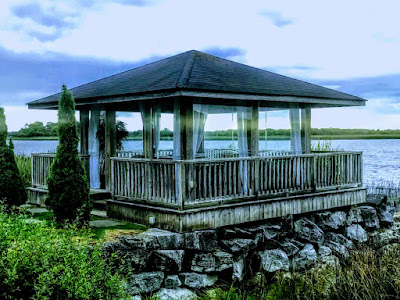 Moments of tranquillity on the shores of Lough Ree (Photograph: Patrick Comerford, 2018)