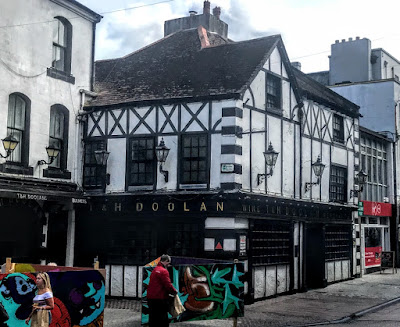 It is something of a jolt to find a landmark building in a city I once knew well is closed. For many years, T & H Doolan on Great George’s Street was once one of the popular picture postcard images of Waterford, and it is one of the buildings I was remember from visits to Waterford during my childhood days in Cappoquin, and one I was familiar with in my 20s and 30s, when I visited Waterford for union meetings and later for CND meetings.

Doolans was said to be ‘an authentic Irish pub’ and the oldest pub in Waterford. It was famous for its traditional Irish music and as a venue for some of the best musicians. Artists said to have performed there include Sinead O’Connor, who went to school in Newtown, and the Clancy brothers, who are said to have once owned the pub.

But I was surprised to find on my walk through the heart of the old city last week that Doolans has been closed for more than four years.

This pub was established in 1710, and is known as Waterford’s oldest pub, but there are local claims that as a pub it may even date back to 1400.

Doolans is located on a pedestrian-only street with shops, pubs and take-aways. The unusual shape of the pub and the way it juts into the line of the street on George’s Street are clear indications of the importance of these premises in drawing a map of the Viking and mediaeval city. A wall in the lounge is said to be much older than the pub itself and part of the original city walls built by the Normans over 800 years ago.

The National Architectural Inventory dates the main premises from 1680-1720.

Doolans closed its doors in January 2014 after more than 300 years in business, and the pub was put on the market after its owner, Eamon Reid, decided to retire.

The property was put up for sale on the instructions of receiver Ken Fennell, with a rates liability of €24,804.02. The selling agent John Rohan dated back to the 1400s and said it has an extraordinarily cultural significance for Waterford City.

The pub and restaurant went to auction with a guiding price of €330,000. Before the auction, a number of bidders showed interest, and local rumours said it had been sold before auction to the British pub chain Wetherspoons.

However, at a lively auction in March 2014 Doolans was bought for €520,000 by the Watchorn family, a well-known bar and hospitality family whose business interests include the Dylan Whiskey Bar in Kilkenny, named after Bob Dylan.

Sean Watchorn said he was delighted to have bought such a piece of history, repeating the claim that it is one of Ireland’s oldest hostelries, dating back to the 1400s.

The building was renovated about 1850, when a timber pub front with pilasters was inserted on the ground floor.

The premises were renovated again around 1975, when new windows were inserted.

The pub front is an important early survival and is of artistic merit, incorporating attractive raised mosaic lettering. Until it closed, there were many important early or original fittings inside, with cast-iron pillars supporting the ceilings and floors are of technical merit.

The building is an attractive part of the streetscape of Great George’s Street, forming a picturesque contrast to the formal quality of the other buildings in the streets in this part of Waterford.

The pub incorporates a terraced, three-bay, three-storey house, built around 1870 and reroofed and renovated at ground floor level in 1995.

Despite those renovations, the house has been well maintained and retains its original balanced, symmetrical form on the upper floors.

However, the pub remains closed since January 2014. Some reports say the pub has not reopened because the builders have unearthed a Viking burial site. The wall in the lounge is said to be part of the original city walls built over 800 years ago by the Anglo Normans.

Before renovation and conservation work could be carried out, archaeological testing took place at this landmark pub.

Parts of the Anglo-Norman town wall still stand at the south-west of the site, and the projected line of the town wall crosses the street and lies beneath the west wall of Doolans’ original west wall, which projects from the streetscape to face O’Connell Street at its junction with Gladstone Street.

The historical literature indicates the city wall crossed Great George’s Street and continued under what is now the boundary between No 32 and No 33.

The testing established a lack of archaeological deposits in the back yard of No 30 George’s Street, which may date back to the Viking Age. The houses here still maintain the boundaries and spatial occupation from the Viking Age.

But the testing confirms historical and cartographic sources that indicate the line of the city wall, and the reports recommend that the city wall should be demarked within the premises, with an information panel to show its part in the fabric of the medieval city.

This is an important building of considerable age that is significant as one of the earliest-surviving purpose-built commercial buildings in the historic core of Waterford City. Hopefully, it can reopen soon. 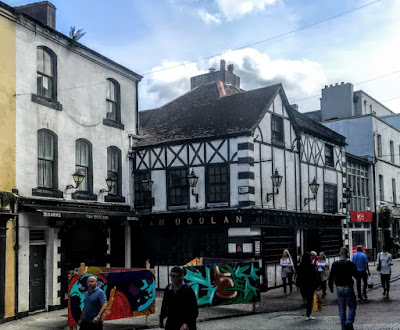 The street line at Doolans hints at the development of the Viking and Norman cities (Photograph: Patrick Comerford, 2018)

Thank you for posting all this historical information. In my family research, I have been able to find out that my great-grandfather, James Hennessy, owned a business a 4 George's Street. His business was as an Auctioneer and Valuator. The year was 1863 until his death in 1879. I would believe it is a safe bet that he spent many a day and evening there at Doolans.

The Pub has an unbelievable history, is loved by the Deise people and is known and loved Internationally. With Gods help it will be open soon again to enjoy the unique athmosphere within.