A fountain in Adare recalls
the piety of a countess 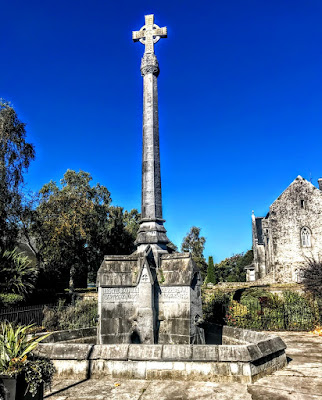 Outside the Trinitarian Abbey Church, which was restored by the Earls of Dunraven in the 19th century as the Roman Catholic parish church of Adare, Co Limerick, stands a tall obelisk-style mounted surmounted by a Celtic cross with carvings in relief.

This marks the fountain erected in the heart of the village in 1844, and the carved trefoil and cross motifs hint at the religious piety of the woman who donated this fountain to Adare.

The inscription says the monument was ‘erected by Caroline Countess of Dunraven in grateful memory of the zeal shewn by the people of this village in quenching fire at the offices Adare Manor on the 1st April 1844.’

The fountain is an early work by Philip Charles Hardwick (1822-1892), the architect who carried out much of the restoration work in Gothic Revival style at both Adare Manor and the parish church.

But who was Caroline Countess of Dunraven?

Caroline Wyndham (1790-1870) was born on 24 May 1790 at Clearwell Court in the Forest of Dean in Gloucestershire. Although the Wyndham family of Dunraven in Glamorgan had no titles or peerages, they were one of the leading families in South Wales.

Caroline’s diaries, letters and annual reflections indicate that, even as a teenager, she was a deeply religious woman who had been affected by Methodism and by the evangelical revival that began in the 1780s.

From the day of her 18th birthday in 1808 until her death in 1870, Caroline kept a diary that forms part of her archive, together with annual reflections and letters.

Caroline was a rich heiress when she married the Hon Windham Henry Quin of Adare Manor in 1810, and he eventually succeed his father as the 2nd Earl of Dunraven. Valentine Quin (1752-1824) presumably chose the title of Dunraven when he was made an earl in 1822 in honour of his daughter-in-law, and the Quin family eventually changed their name to Wyndham-Quin.

She was a remarkable lady: immensely energetic, ambitious and good humoured, she was also extremely sensible and careful about money. Architecture was an interest she shared with her husband.

As well as taking an active part in the restoration of Adare Manor and the village churches, Caroline continued to take an active interest in the life of the church in Gloucestershire village where she was born, and a copy of her portrait hangs in the vicar’s vestry in Saint Peter’s Church, Clearwell, in the Forest of Dean.

Caroline financed the building of Saint Peter's Church, the mortuary chapel, the repair of the 14th century cross, work at the local school, the building of the cottage hospital and a new frontal on Saint Anne’s well, all at Clearwell.

For this work, she commissioned the architect John Middleton (1820-1885), who, like Hardwick was an exponent of the Gothic Revival. Clearwell has the most examples of his work in one village anywhere in England.

She and her husband also set about rebuilding Dunraven Castle in Glamorgan.

Her fountain in Adare sits next to the Holy Trinity Church in a prominent place on the Main Street and it contributes significantly to the streetscape of the town.

The monument displays fine stonemasonry and artistic skills, and the lettering and carving at the base of the cross are particularly fine. Although no water now flows from the cast-iron spouts on the three sides, the fountain remains a curious historical and artistic item in the town. 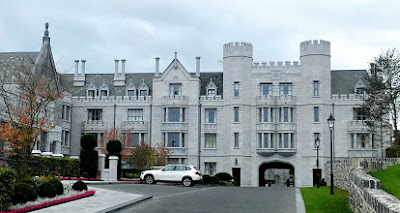 Adare Manor, once the home of the Wyndham-QAuin family, Earls of Dunraven (Photograph: Patrick Comerford, 2018)