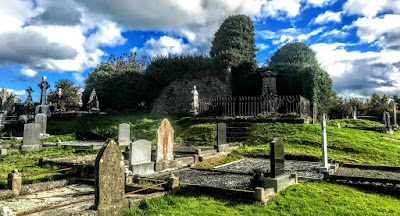 As the local landlords in Newcastle West, the Courtenay family were benign patrons of the church, building both the Church of Ireland and the Roman Catholic parish churches, and this patronage is reflected in the names of streets in the town, including Bishop Street and Church Street.

However, Saint Thomas’s Church in the square fell into disrepair, and was demolished over half a century ago, in 1962. Today, the site of the church is now marked out by low-level walls, and here too is a bronze figure representing Gerald FitzGerald, 3rd Earl of Desmond.

This church may have been replaced in turn by the church in Churchtown that O’Donovan said was built in 1690. This church was abandoned when Saint Thomas’s was built in 1777, closer to the new town being laid out by the Courtenay family and closer to the castle. After the new church was built, the glebe land was still held by the Church of Ireland rector and later by the Revd Horatio Bolton Smith of Castle View.

Saint David’s stood on the edge of the Castle Demesne, and by 1840 it was in ruins.

When I was in Newcastle West at the weekend, I walked around the old graveyard in Churchtown, which was enclosed and gated in the 19th century, and the church ruins.

The ruins of Saint David’s Church are surrounded by this graveyard covering about 4 acres. The graveyard is still in use today and holds the graves of local Church of Ireland and Roman Catholic families, with the older graves encircling the church ruins in the centre of the graveyard.

The west gable has two central doors, one directly above the other, and there is a window opening in the north wall. All three walls show plaster scars for wooden frames. The top of the west gable still has the stump of a bellcote. Against the outside of the west gable are remains of gabled porch. 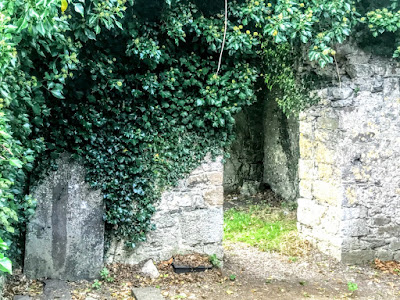 Inside the ruins of Saint David’s Church on the edges of Newcastle West, Co Limerick (Photograph: Patrick Comerford, 2018)

The area once where the east end of church stood is now filled with 18th and 19th century burial vaults, including one with a classical limestone mausoleum. A flat limestone slab in the north-west corner of the surviving portion of church has the date 1705.

Today, not enough of church structure survives to date it accurately, although the surviving features may late from the late 17th century date, and the core of church could be late-mediaeval.

Saint David’s Well is said to have been in the Castle Demesne, in what was once the Earl of Devon’s pleasure garden. It was said to curie people ‘possessed by the Fairies,’ although there are no other traditions associated with the well, and I was unable to find it during my rambles around the Castle Demesne last weekend.

Inside the church ruins, there is a headstone for John Newton, who died on 21 February 1715. But the oldest legible gravestone is that of Elizabeth Brudennell, who died on 13 January 1705, and her husband, who died on 14 January 1709. There may be many older graves whose markers are lost or now illegible.

The Curling family, who were the agents of the Courtenay family and the Earls of Devon, proprietors of the Newcastle West castle and estates, are buried here, as well as members of their staff, and members of the Nash family who later owned the castle.

William Fuller Hartnett (1804-1879) who is also buried here was a prominent nationalist but is remembered in Newcastle West as the man who built ‘Fuller’s Folly,’ immediately south-east of Desmond Castle in Newcastle West.

William Fuller Hartnett was a Cork-born linen merchant. His wife died tragically at the age of 40, leaving him with a young family. He was a close political ally of Daniel O’Connell, but later switched his political allegiance to the Young Ireland movement, and was jailed for a few months in 1840 because of his strong radical political views.

Later, Fuller Hartnett leased a plot of land beside the Desmond castle from the Earl of Devon in 1867. It is said Fuller Hartnett had a disagreement with the Curling family and so built his own castle as a form of revenge or in a fit of pique. It was an expensive enterprise, reportedly costing £1 a stone to build. The building had little or no practical use, and virtually bankrupted him, and so it was known as ‘Fuller’s Folly.’

Although he leased the land beside the castle from the Earl of Devon in 1867 and died in 1879, Fuller’s Folly bears the date 1889. He is buried in Churchtown graveyard.

Also buried here are the victims of the Great Famine (1847-1848). A plaque commemorates Paddy Flanagan, who with Jim Quinn found the Ardagh Chalice on 25 September 1868.

Other graves include Jackie Pierce, the father of Sophie Pierce (1896-1939), the pioneering aviator from Newcastle West.

The grave of William Ayers, a local blacksmith who died in 1751, was inscribed:

My sledge and hammer lie reclined,
My bellows, too, has lost its wind,
My life extinct, my forge decayed,
My vices in the dust are laid.
My coal is spent, my iron gone,
My nails are drove, my work is done.
My fire-dried corpse lies here at rest,
My soul smoke like soars to the blest.

However, the inscription on this gravestone is no longer visible. 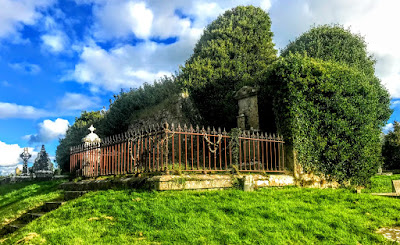 The area around the church is now filled with vaults and mausoleums (Photograph: Patrick Comerford, 2018)

I am delighted by Patrick Comerford’s account of the historic Churches and graveyard of Newcastle West. I am a native of the town and I can remember the demolition of the Protestant Church, as we called it, in 1962. The stone was sold at auction, and my father was one of the bidders. I don’t know how many bidders there were at the start, but it reached a stage that my father and one other remained. The bids were rocketing. Eventually my father saw sense and stopped. He came home, somewhat chastened by the experience. The next day the successful bidder called on my father. He admitted he had been carried away, and said he wished to let my father have the stone for the sum he, my father, had last bid. The answer was thank you, but no!
The townspeople were told that the Church was demolished because it no longer had any parishioners. Rathkeale, which had an active C.of I community was only 8 miles away. In the 1940’s the Manager of the National Bank, Mr.Spillar, and his wife attended Sunday Service there, as did a children’s nurse, who took Communion there. I’m sure there were others too. I remember trying to convince the young nurse that Communion in her Church was not ‘the real thing!’
How far we have come since the 1940’s!
Patricia McKenna, nee Nash.