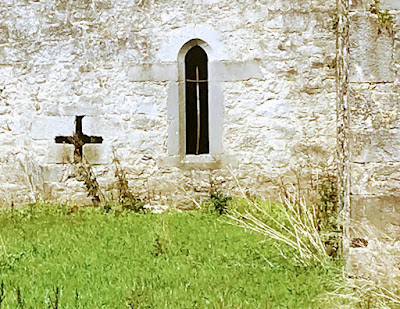 ‘Christ is our corner-stone’ (Hymn 327) … a cross in a hidden corner among the stones and ruins of Askeaton Friary (Photograph: Patrick Comerford, 2018)

This morning offers a number of choices. The Gospel reading for the Fifth Sunday before Advent tells the story of Blind Bartimaeus being healed outside the walls of Jericho by Christ on his way to Jerusalem.

This is also being marked in some parish churches as the Bible Sunday, and many of us are familiar with the words of the Collect of the Day:

But this morning, we are celebrating Saint Simon and Saint Jude, Apostles, whose feast day is celebrated in the Church Calendar today.

Many people on our city streets may associate Saint Simon with the homeless and housing crisis in Ireland, and think of Saint Simon as someone cares for the homeless people on our streets. However, the Simon Community takes its name from Simon of Cyrene who helps Christ carry his cross on the way to Calvary and his Crucifixion.

If you asked who Jude is, you might be told he is ‘Obscure’ – or the Patron of Lost Causes.

These two are little known as apostles, without fame, and that obscurity is almost affirmed by the fact that they have to share one feast day and do not have their own separate, stand-alone celebrations in the Calendar of the Church.

In an age obsessed with reality television, the X-Factor, the Apprentice or celebrities who are celebrities – just because they are – Simon and Jude appear like a pair of misfits: we know little about their lives or how they lived them, they are hardly famous among the disciples, and they certainly are not celebrity apostles.

Simon and Jude are way down the list of the Twelve Apostles, and their names are often confused or forgotten. In the New Testament lists of the Twelve (Matthew 10: 2-4; Mark 3: 16-19; Luke 6: 14-16; Acts 1: 13), they come in near the end, in tenth and eleventh places. Well, with Judas in twelfth place, they just about make it onto the ‘first eleven.’

The ninth name on the lists is James, the James who was remembered last Wednesday [23 October]. Judas or Jude is often referred to as ‘the brother of James,’ and this in turn leads to him being identified with the ‘brothers of the Lord.‘ So, on this day, we celebrate Simon the Zealot, one of the original Twelve; and Jude or Judas of James, also one of the Twelve and author of the Epistle of Jude.

After the Last Supper, Jude asked Christ why he chose to reveal himself only to the disciples, and received the reply: ‘Those who love me will keep my word, and my Father will love him, and we will come to them and make our home with them’ (John 14: 22-23).

His Epistle includes a memorable exhortation to ‘contend for the faith that was once for all entrusted to the saints’ (Jude 3), and ends with that wonderful closing: ‘Now to him who is able to keep you from falling, and to make you stand without blemish in the presence of his glory with rejoicing, to the only wise God our Saviour, be glory, majesty, power, and authority, before all time and now and forever. Amen’ (Jude 24-25).

In the Gospel reading (John 15: 17-27), the Apostles are warned about suffering the hatred of ‘the world.’ Later, as the Gospel was spread around the Mediterranean, isolated Christians may not have realised how quickly the Church was growing. In their persecutions and martyrdom, they may have felt forlorn and that Christianity was in danger of being a lost cause.

But in the Gospel reading, Christ encourages a beleaguered Church to see its afflictions and wounds as his own.

As Saint Paul reminds us in this morning’s Epistle reading, we are building up the household of God upon the foundation of the apostles and prophets, with Christ himself as the cornerstone, and we are being built together spiritually into the dwelling place of God (Ephesians 2: 19-22).

26 ‘When the Advocate comes, whom I will send to you from the Father, the Spirit of truth who comes from the Father, he will testify on my behalf. 27 You also are to testify because you have been with me from the beginning.

Almighty God, who built your Church upon the foundation
of the apostles and prophets
with Jesus Christ himself as the chief cornerstone:
So join us together in unity of spirit by their doctrine
that we may be made a holy temple acceptable to you;
through Jesus Christ our Lord. Amen.

The Collect (Fifth Sunday before Advent):

God give you grace
to share the inheritance of all Saint Simon and Saint Jude
and of his saints in glory ... 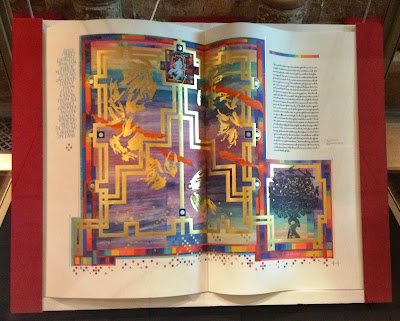 ‘Blessed Lord, who caused all holy Scriptures to be written for our learning’ (the Collect) … pages from Saint John’s Gospel, the first complete hand-written and illuminated Bible since the Renaissance, in a recent exhibition in Lichfield Cathedral; Sunday may also be marked as Bible Sunday (Photograph: Patrick Comerford)