13 laughing men without
age in time, and laughing
at time in a park in Porto 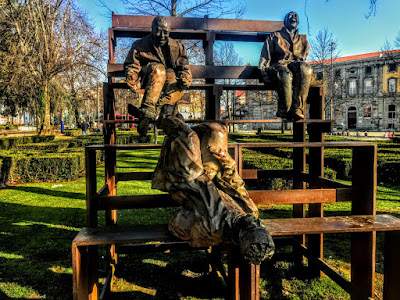 ‘Thirteen Laughing at Each Other’ … one of a group of four sculptures by Juan Muñoz in Porto (Photograph: Patrick Comerford, 2019)

These groups of men on park benches talk animatedly, laughing at each other and laughing with each other. If we take the time to allow ourselves to stop, and wait, and watch, their smiling and laughing can be infectious.

It is men without age but with plenty of time in groups like this who have inspired a set of bronze sculptures in a park in the centre of Porto that invites us to stop and engage in this time without age and age without time.

These charming sculptures are in the Jardim da Cordoaria, the Garden of the Ropery, on Campo dos Mártires da Pátria. This is one of the prettiest parks in Porto, close to the twinned Carmelite churches, to the Clerigos tower and church and to the Livraria Lello bookshop.

The park is triangular in shape and over the years the garden has gone through many transformations. The garden was founded by Alfredo Allen, Viscount de Vilar d’Allen, in 1865, and laid out by the German landscape artist Emile David.

A cyclone altered much of the appearance of this romantic garden in 1941. But today its trees are officially classified as being of Public Interest and the park has a number of important sculptures: Rapto de Ganimedes (1898) by Fernandes de Sá, Flora (1904), by António Teixeira Lopes, Ramalho Ortigão (1909) by Leopoldo de Almeida, António Nobre (1926) by Tomás Costa, and Thirteen Laughing at Each Other (2001) by Juan Muñoz (1953-2001). 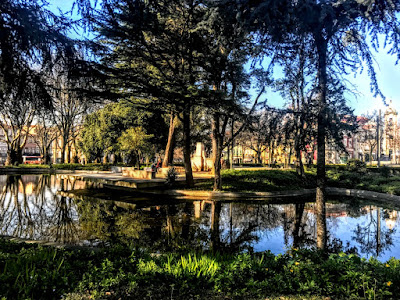 The Jardim da Cordoaria on Campo dos Mártires da Pátria is one of the prettiest parks in Porto (Photograph: Patrick Comerford, 2019)

The sculpture Thirteen Laughing at Each Other by Juan Muñoz is, in fact, a collection of four bronze and steel benches around the park, with 13 figures in all, known in Portuguese as Treze a rir uns dos outros.

On each bench, two or three almost life-size figures are sitting on the top tiers laughing with – or at – a figure laying upside down on a bottom tier.

Have they pushed him over, or has he fallen? Indeed, is he rolling over or falling down in laughter at them?

Some say these 13 men also commemorate the liberal freedom fighters who were executed in this park in 1829.

It is impossible not to smile at these ageless men. They are utterly captivating and are totally at home in the park setting.

This is the last public work by the Spanish sculptor, Juan Muñoz (1953-2001), who died shortly after it was completed. Muñoz was based in Madrid and one of the late 20th century’s great European artists. This collection was offered to Porto by the Spanish company Crédito y Caución in 2001 when Porto was the European Capital of Culture. The artist died that same year at the age of 48.

As a sculptor, Juan Muñoz worked primarily in paper maché, resin and bronze. He was also interested in the auditory arts and created compositions for radio. But when he was asked what he worked at, Muñoz would reply simply by saying he was a ‘storyteller.’

Juan Muñoz was born on 17 June 1953, the second of seven brothers, into a prosperous, educated family in Madrid. He went to a local school but became bored and was expelled. His father employed a poet and art critic to provide lessons, and so Muñoz developed an awareness of modernism as he grew up in Franco’s Spain.

He moved to England in the 1970s to study at Croydon College and the Central School of Art and Design. There he met his wife the sculptor Cristina Iglesias. Later he was awarded a Fulbright scholarship in 1982 and travelled to the US to study at the Pratt Institute in New York.

His first exhibition was in 1984 in the Fernando Vijande Gallery in Madrid. Since then, his works have been frequently exhibited in Europe and throughout the world.

Muñoz began breaking the rules of traditional sculpture in the 1990s by sculpting works in a ‘narrative’ manner, creating smaller-than-life-size figures in an attitude of mutual interaction. His sculptures often invite the viewer to relate to them, making the viewer feel as if they have discreetly become part of the work.

Muñoz worked primarily with paper maché, resin and bronze. His slate-grey or wax-coloured monochrome figures create a sort of discreetness due to their lack of individuality, but that absence of individuality questions the viewer, perhaps even making the viewer uncomfortable.

Muñoz was also interested in the auditory arts, creating some works for radio. One of his more recognised auditory works was a collaboration with the British composer Gavin Bryars, A Man in a Room, Gambling (1992). This consisted of Muñoz explaining card tricks over a composition by Bryars. The pieces – 10 segments, all shorter than five minutes – were played on BBC Radio 3.

In one unpublished radio programme (Third Ear, 1992), Muñoz proposed that there are two things that are impossible to represent: the present and death, and that the only way to arrive at them was by their absence.

Muñoz exhibited in Dublin at the Irish Museum of Modern Art in the Royal Hospital, Kilmainham, in 1994.

He was awarded Spain’s major Premio Nacional de Bellas Artes, in 2000. When asked what he would do with the prize fund, he replied: ‘I think I’ll buy a watch.’

But time was running out for him. He died suddenly at the age of 48 in his summer home in Santa Eulària des Riu, Ibiza, on 28 August 2001. The 13 laughing men in a park in Porto are his last and probably his best-known work. 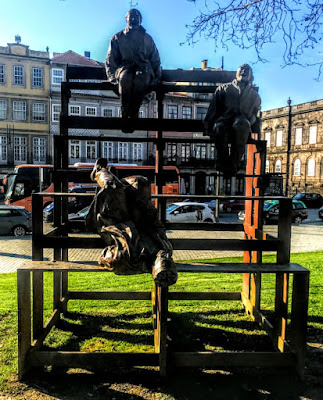 ‘Thirteen Laughing at Each Other’ in Porto … the last public sculpture by Juan Muñoz (Photograph: Patrick Comerford, 2019)