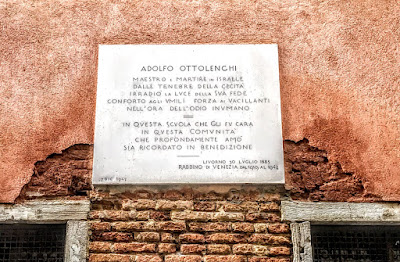 In my search earlier this week for the two Comerford brothers, Bert (Bert Brantford) and Harry (Harry Ford), and their wives, the two Sipple sisters, Aggie and Rosina, I was fascinated by finding that these two sisters are descended from some of the most interesting Sephardi Jewish families in Europe.

Many of their immediate ancestors could trace their ancestry directly to leading Sephardi families who lived in Amsterdam, Livorno, Venice and Seville, including Spanish Marrano families who had been forced to convert to Christianity in Seville during the Inquisition but had maintained their Jewish faith and practices in their private family and domestic life.

The grandmother of Agnes and Rosina Comerford, Dove Deborah (Paloma) de Isaac Nunes Martinez (1788-1876) was married twice, marrying Abraham Ottolenghi (1794-1847) in 1847. He was her second husband and she was his second wife.

Abraham Ottolenghi’s father, Israel Ottolenghi (1774-1828), was born in Livorno in Tuscany. The Ottolenghi family apparently originated in Germany, and the name is an Italian form of Ettlingen. Prominent members of the family include: Joseph b Nathan Ottolenghi (died 1570), Rabbi of Cremona; Samuel David b Jehiel Ottolego (died 1718), scholar and kabbalist, born in Casale Monferrato; and Abraham Azariah (Bonaiuto) Ottolenghi (1776-1851), rabbinical scholar, born in Acqui.

But this complex and remote connection with the Comerford family also reminded me of the story I heard in Venice three months ago of another member of the Ottolenghi family, Adolfo Ottolenghi (1885-1944) a Jewish scholar who was Chief Rabbi of Venice (1919-1944) and perished in the Holocaust. 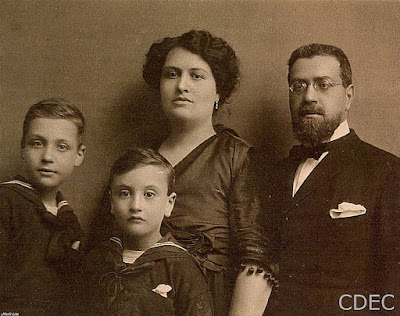 Adolfo Ottolenghi was born on 30 July 1885 in Livorno, the son of Avraham Abramo and his wife Amalia (nee Ventura). He studied at the rabbinical college in Livorno and law at the University of Pisa, qualifying as a procuratore or lawyer, and initially planned to follow a career in the legal profession.

He also received the diploma of a maschil in 1907, a qualification found principally in Italy. The word refers traditionally to a ‘scholar’ or ‘enlightened man,’ and one who held a secondary rabbinical position corresponding to that of a dayyan. In Italy, and especially in Tuscany, the title maschil is conferred on rabbinical students. In 1911, he qualified as a chakham, the official title used among Sephardi Jews, particularly Spanish and Portuguese Jews, for local rabbis.

At the end of 1911, the Jewish community in Venice invited him to become secretary of the Fraterna Generale di Culto e Beneficenza, the main Jewish charity in the city. At the time, Moisè Coen Porto (1834-1918) was the Chief Rabbi of Venice and Giuseppe Musatti (1841-1928) was the president of the Jewish community (1903-1919).

Giuseppe Musatti and Amedeo Grassini, a prominent lawyer, founded a financial group that started the transformation of the Lido into a tourist destination and that financed Grassini’s formation of the first vaporetto company in Venice. Ever since, the vaporetti or water buses have carried residents and millions of tourists every day along the Grand Canal and to the lagoon islands. But Grassini is also remembered as the father of Margherita Sarfatti (1880-1961), the beguiling art critic who became Mussolini’s lover and his first biographer in 1925.

Ottolenghi served the community in Venice as a rabbi from 1911 to 1919. Because of his short-sightedness, he was exempted from military conscription during World War I. But the frontline was close to Venice, and throughout the war he took care of Jewish refugees, taking many of them to Livorno.

As chief rabbi, he became involved in deciphering inscriptions on the graves in the Jewish cemetery in the Lido and was involved in researching the history of the Jewish community in Venice. He published a number of monographs and papers in Jewish newspapers, including the Corriere Israelitico, the Vessillo Israelitico and the Rassegna mensile di Israel.

His services to the city of Venice and its culture and history were recognised when he was elected a fellow of the Ateneo Veneto, the Venetian academy, in 1933.

The Jewish school had grown under his oversight, allowing the community to accommodate all Jewish students who were expelled from public schools after Italian racist laws were enforced in 1938.

Italy, which had been an ally of Nazi Germany, became an occupied country in September 1943. The Nazis began a systematic hunt for Jews in all Italian cities, including Venice. In November 1943, Jews were declared ‘enemy aliens’ in accordance with the manifesto of the puppet state, the Italian Social Republic, to be arrested and their property seized.

When the Nazis occupied Venice, they demanded the President of the Jewish community, Giuseppe Jona (1866-1943), a distinguished doctor and academic, hand over a list of all Jews living in Venice. During World War I, the Italian Ministry of the Interior had recognised him as ‘an enthusiastic patriot of unshakable faith’ who had given ‘all his indefatigable work as a citizen to his country. A true example of activity and of very high civil value.’

Although Dr Jona had not been a practising Jew, the promulgation of fascist racist laws in 1938 forced his expulsion from academic life and the practice of medicine. In June 1940 he was elected the President of the Jewish community in Venice in succession to Aldo Finzi, who had been a fascist sympathiser.

On the morning Dr Jona had been commanded to deliver the list to Nazi headquarters, Jona decided to burn the list and end his own life on 17 September 1943. Thanks to his heroic self-sacrifice that day, the Nazis were never able to locate all the Jews of Venice. As well as being Chief Rabbi, Adolfo Ottolenghi now took over as president of the community.

An order was issued on 30 November 1943 to deport the members of the Jewish community in Venice and to confiscate their property.

On the night of 5/6 December 1943, 150 Jews were arrested and were held at Marco Foscarini college, the women’s prison on Giudecca, the prison at Santa Maria Maggiore. About 40 Jews were deported to the concentration camp at Fossoli on 19 December 1943.

Elio Gallina, a notary in Treviso who saved hundreds of Jews, helped Carlo Ottolenghi, his wife Annamaria (nee Levi Morenos) and their children Alberto and Elisabetta, Adolfo Ottolenghi’s two grandchildren, to escape to Switzerland in December 1943, using false papers with the name Vianello.

The ghetto was raided on 31 December. Days later, Adolfo Ottolenghi’s wife, Regina, fled and was sheltered by Gallina in his home in Treviso until 7 April. He gave her forged papers in the name ‘Pennella’ and she made her way to her sister in Piedmont, while her youngest son Eugenio was taken to safety in Genoa.

Among the prisoners arrested in December 1943, only those over the age of 70 were allowed to return to Venice in early 1944, and there they were imprisoned in the Casa di Ricovero Israelitica. 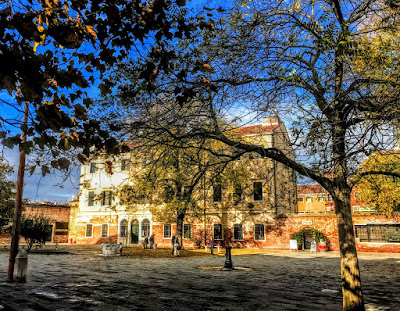 In 1944, the remaining 20 old people in the Jewish convalescent home in the Ghetto were arrested and 29 people were taken from their hospital beds in 1944 (Photograph: Patrick Comerford, 2018)

Meanwhile, Adolfo Ottolenghi, now infirm and almost blind, spent a month in prison in Como. He was finally arrested on the night of 17/18 August 1944, along with the remaining 20 old people in the convalescent home and 29 people taken from their hospital beds. Most of those arrested that summer spent some time in the Risiera di San Sabba concentration camp in Trieste.

Ottolenghi was deported to the Auschwitz, where he died after 2 September 1944, although the exact date is not known.

In all, 243 Venetian Jews were deported from Venice, but about 1,200 other members of the community managed to escape, many to Switzerland and others to Allied-liberated parts of Italy. Of the 243 people forcibly deported to Auschwitz, only eight returned home to Venice. The Jewish population of Venice was 2,000 in 1938 out of 30,000 people; by the end of World War II, it had been reduced to 1,050. 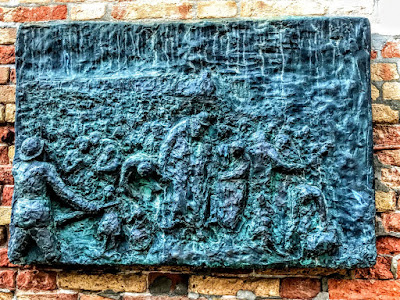 Adolfo Ottolenghi is remembered for his sincerity and his devotion to the needs of his community. He wrote several historical essays, including a biography of the 17th century Jewish scholar in Venice, Leon da Modena (1571-1648), published in 1929, and of Rabbi Abraham Lattes (1809-1875) of Venice, published in 1930.

Meanwhile, Dr Giuseppe Jona is remembered in a plaque of the Campo del Ghetto di Venezia as a ‘master of righteousness and goodness’ for helping the Jewish community ‘in the sad hour of persecution,’ offering ‘the treasures of his great soul.’

In 2007, Yad Vashem recognised Elio Gallina as ‘Righteous Among the Nations.’

With antisemitism continuing to infect the body politic throughout Europe, it is important to remember these heroes and victims of the Holocaust, no matter how remote or distant the connections may be.