Delare House, the Tottenham
townhouse in New Ross that
became a convent school 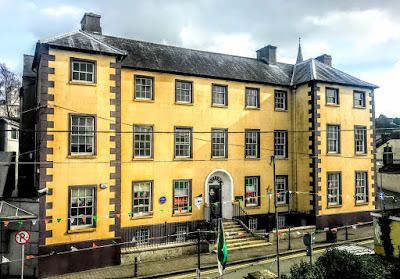 Delare House was built in 1790 as the townhouse of the Tottenham family in New Ross, Co Wexford (Photograph: Patrick Comerford, 2019)

Delare House on South Street, New Ross, stands across the street from Saint Michael’s Theatre, once Saint Michael’s Chapel, which served as the parish church of this Co Wexford town from 1806 to 1902.

The Tottenham family papers show that Charles Tottenham expressed his disapproval when the site for Saint Michael’s Chapel across the street was provided by his brother Nicholas Loftus Tottenham (1745-1823), MP successively for Bannow and Clonmines, Co Wexford. 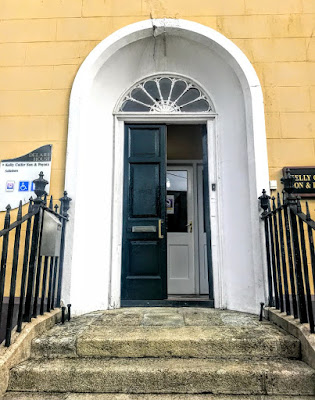 Delare House is an important part of the 18th-century domestic built heritage of New Ross. Its interesting architectural include its almost-symmetrical shape centred on a ‘Morrison Doorcase’ that has a simplified ‘peacock tail’ fanlight.

The windows diminish in scale on each floor, producing a graduated visual impression.

Although I did not get inside Delare House last week, I understand the interior includes a central hall that still has its original encaustic tiled floor, the original staircase on a dog leg plan, timber panelled doors with carved timber surrounds, and decorative plasterwork from the cornices to the ceilings, as well as an inlaid cut-veined grey marble Classical-style chimneypieces.

In the past, South Street has also been known as Michael Street and as Chapel Street.

The Sisters of Mercy, founded by Mother Catherine McAuley, moved to New Ross is 1853, and at first lived in a house in Priory Street. The Carmelite nuns and the Christians Brothers were already in the town since 1817 and 1849 respectively, and the Sisters of Mercy were followed by the Good Shepherd nuns (1860), the Sisters of Saint John of God (1873).

The Senior Department began in 1856 as a private day secondary school teaching English, arithmetic, needlework, knitting, lace-making, deportment, elocution and religion. It was known as Saint Mary’s, an ‘Academy for Young Ladies,’ and had about six or seven pupils in each class.

New school buildings were designed in 1894-1895, the architect of the Church of Saint Mary and Saint Michael, the new Roman Catholic parish then being built in New Ross.
It became a secondary school in 1917, and a boarding school opened in 1926 to complement the day school.

The school moved to Irishtown in 1969, and the Convent of Mercy on South Street closed in 1971. Delare House was restored in 2003-2004, and it is now used as office accommodation.

Delare House has been well maintained for more than two centuries, the elementary form and massing survive intact together with substantial quantities of the original fabric. 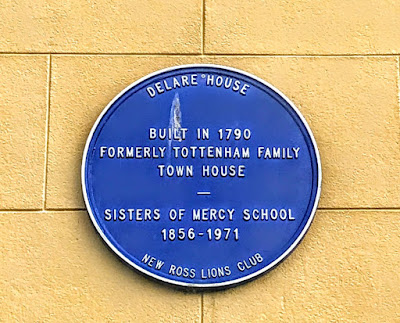 The Tottenham family and the Sisters of Mercy remembered at Delare House in New Ross, Co Wexford (Photograph: Patrick Comerford, 2019)