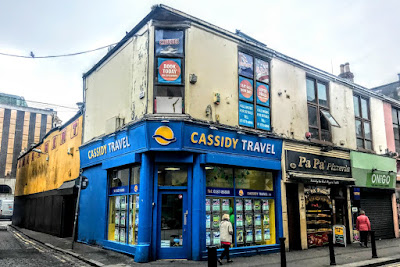 But only recently did I realise that the name Olivers gave to the tune of this hymn, ‘Leoni,’ is a tribute to a great singer of the 18th century who once ran a theatre and opera company in Dublin and who may have officiated regularly as a cantor or assistant rabbi at the Marlborough Green Synagogue in Dublin.

The tune is a Hebrew melody Thomas Olivers heard sung by Myer Lyon (Meier Leoni), the cantor of the Great Synagogue in London. Jewish tradition says the Yigdal was sung to this tune at the dedication of Solomon’s Temple … although the tune probably dates from the mid-14th century.

Olivers wrote ‘The God of Abraham Praise’ as a Christian adaptation of the Yigdal, loosely translating it loosely and giving it a Christian context after visiting the Great Synagogue of London in 1770. It was first published in 1772. The title of the hymn was based on a verse in the Book of Exodus: ‘I am the God of thy Father, the God of Abraham’ (Exodus 3: 6).

Olivers was working with John Wesley at the time he wrote ‘The God of Abraham Praise.’ During that time, he often met members of London’s Jewish community. Olivers was attending the Great Synagogue in London in 1772 when he heard the cantor, Myer Lyon, singing Yigdal in Hebrew during a service.

Olivers then paraphrased and translated Yigdal into English and gave the hymn a Christian emphasis. He then asked Lyon if he could use the Jewish melody for the new hymn. Lyon gave him the music and Olivers named this hymn tune Leoni after Lyon.

When Olivers showed the new hymn to a friend, he annotated each line with scriptural references from the Bible.

Olivers wrote the hymn with 13 verses. However, later editions omitted a number of these verses, and most hymnbooks use only four verses.

Thomas Olivers was born at Tregynon, near Newtown, Montgomeryshire, in 1725. He was only four when his father died, his mother died soon after, and he was brought up with little education. He moved to Bristol when he was still living in poverty, and there he heard George Whitefield preach.

He soon joined the Methodists in Bradford-on-Avon, where he met John Wesley and became one of his preachers. Olivers became an evangelist in Cornwall in 1753. When he died in London in 1799, he was buried in Wesley’s tomb at the City Road Chapel.

The version of the Yigdal Olivers heard Leoni sing was probably written by Daniel ben Judah, a Jewish liturgical poet who lived at Rome in the mid-14th century.

Leoni’s reputation encouraged a number of Christians to come to the Great Synagogue on Friday nights to hear him. Thomas Olivers was so impressed by Leoni’s moving rendition of the Yigdal in 1770 that he was inspired to write words for his hymn using the melody. The result was the hymn ‘The God of Abraham Praise.’