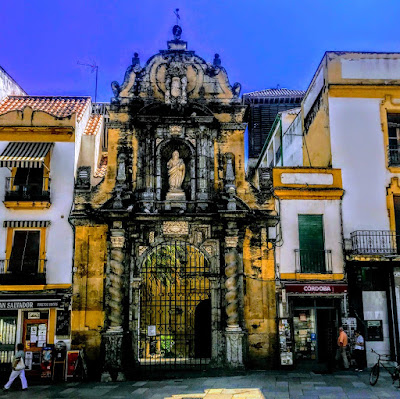 The imposing entrance to the Royal Church of San Pablo on Calle Capitulares in Córdoba (Photograph: Patrick Comerford, 2019)

For many visitors to Córdoba, the highlight of their visit is the Mezquita-Catedral, or Great Mosque and Cathedral of the city, combined, perhaps with a short visit to narrow, white-washed streets of the old Jewish quarter, or even one or two Roman sites, such as the Puente Romano or Roman Bridge with its tower.

But a short walk can lead to other smaller, interesting churches and Roman sites.

I was staying last week for two nights in the Hotel Macia Alfaros, on the north-east edge of the old walled city. Just a few steps away, on the corner of Calle Capitulares and San Pedro, stands the Real Iglesia de San Pablo or Royal Church of San Pablo de Córdoba, the church of a long vanished Dominican convent.

The street entrance to the church is almost opposite the site of the Roman Temple, and it seems more like a city gate, as with the Puerta de Almodovar on the west side of the walled city. 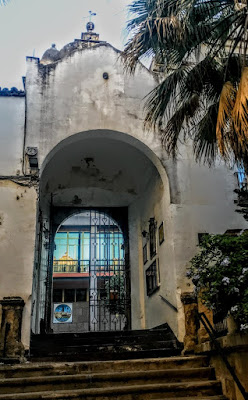 The steps leading down to the garden patio and west door of the church (Photograph: Patrick Comerford, 2019)

From this gate, steps lead down to a small garden patio in front of the church. This church was first founded as the Royal Convent of Saint Paul in the neighbourhood of San Andrés by King Ferdinand III in 1241, after the Christian monarch captured the city following five centuries of Muslim rule.

From its foundation, the church and convent of San Pablo enjoyed royal protection. Although all that remains today are the church, its courtyard, and some ancillary buildings, the convent once occupied an extensive site, and included an orchard known as Almesa. 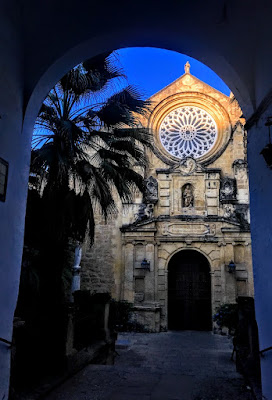 The church and convent were founded for Dominican friars in the late 13th century (Photograph: Patrick Comerford, 2019)

The convent was founded as a house for the Dominican friars, and documents dating from its foundation show the convent enjoyed many privileges and received many donations and alms. The friars ran a school and also owned and rented many properties in the area, so that a new suburb grew up around their new convent.

The church was first built in the late 13th century and early 14th century, and details in the Mudéjar style on the pillars inside date from this period. 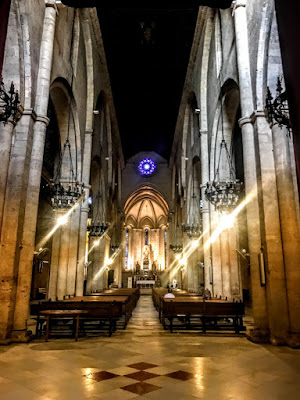 Inside the Royal Church of Saint Paul in Córdoba (Photograph: Patrick Comerford, 2019)

Inside the church, the Chapel of Our Lady of the Rosary was built in the 15th century.

Later, the church was rebuilt in the 16th century by architects such as Hernán Luiz III and Juan de Ochoa, who rebuilt the main façade of the church in the Mannerist style and also built the cloisters of the convent.

A second chapel, the Chapel of the Virgin of Pilar, includes a statue of Our Lady of Sorrows by Juan de Mesa that dates from 1627. This is one of the important statues in the Holy Week processions and parade in Córdoba. 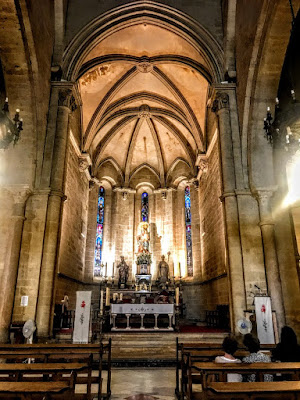 The High Altar in the Royal Church of Saint Paul in Córdoba (Photograph: Patrick Comerford, 2019)

The church has three naves divided by pillars covered with Mudéjar ornamentation. There are three apses that are circular on the inside and rectangular on the outside, with a quarter-sphere dome, and a central five-sided vault.

In the north aisle of the church, there is a pointed flaring arch, with caliphate-era capitals, leading into San Pablo Street. In the south aisle, an old door is in the Gothic-Mudejar style.

The marble Baroque façade facing Calle Capitulares dates from 1706-1708 and is the work of Bartolomé de Rojas and Andrés de Pino Ascanio. 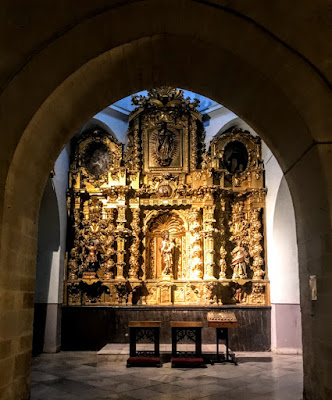 A side chapel in the north aisle of the church (Photograph: Patrick Comerford, 2019)

The 15th century Chapel of Our Lady of the Rosary was renovated in 1758 and is an interesting example of the Cordoban Baroque style.

The chapter house was designed by Hernán Ruiz II, but may have been left unfinished because of a shortage of funds. 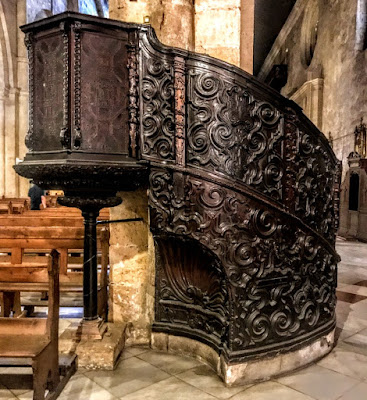 The pulpit in the Church of Saint Paul (Photograph: Patrick Comerford, 2019)

During the French occupation of Spain, the convent was converted into a barracks in 1810 and the church alone was allowed to retain its original function.

The convent was in a ruinous state by 1848 and there were proposals for its demolition. Instead, however, the church and its annexes were saved and the building was restored in the early 20th century by the architects Adolfo Castiñeira, Matteo Inurria and P Pueyo.

The Congregation of Missionaries Claretian Fathers took charge of the church in 1904, and they continue to run it as a parish church today. 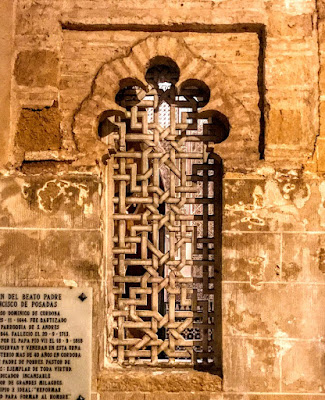 Mudéjar ornamentation inside the west wall of the church (Photograph: Patrick Comerford, 2019)

The stone tower at the foot of the church is of stone and has a wooden bell tower at the top. One of the peculiarities of San Pablo is its carillon, installed in the tower at the beginning of the 20th century. It was restored and reopened on 29 June 1998.

The church was restored and refurbished in 2008 as part of a cultural project in the city. Some remains of the early convent cloisters can still be seen in a passage that leads to the neighbouring Ministry of Culture on Capitulares Street. 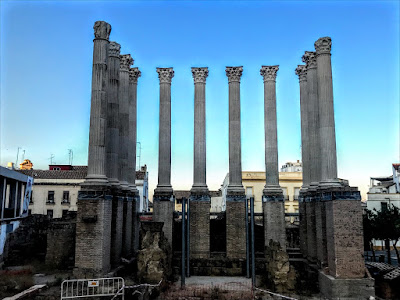 The Roman Temple across the street from the Royal Church of Saint Paul (Photograph: Patrick Comerford, 2019)