‘The Future of Religious Minorities
in the Middle East’: a book review 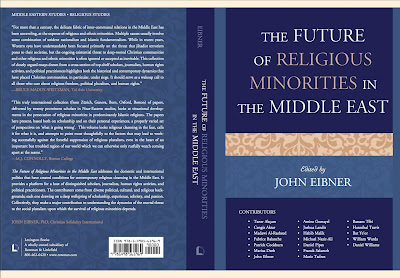 The Future of Religious Minorities in the Middle East

A new report commissioned by the British Foreign Secretary, Jeremy Hunt, shows that the persecution of Christians is pervasive in parts of the Middle East, sometimes amounting to genocide, and has prompted an exodus in the past two decades. Millions of Christians have been uprooted from their homes throughout the Middle East, and many have been killed, kidnapped, imprisoned and discriminated against. The report also highlights discrimination across south-east Asia, sub-Saharan Africa and in east Asia – often driven by state authoritarianism.

The interim report is based on work by Bishop Philip Mounstephen of Truro, makes for sobering reading. It says ‘the inconvenient truth’ is ‘the overwhelming majority (80%) of persecuted religious believers are Christians.’

The Christian population in the Middle East and North Africa stood at 20% a century ago. In recent years, this proportion has fallen to less than 4%, or roughly 15 million people. In countries such as Algeria, Egypt, Iran, Iraq, Syria and Saudi Arabia the situation of Christians and other minorities has reached an alarming stage, according to the report. The Arab-Israeli conflict has caused the majority of Palestinian Christians to leave their homeland, so that the population of Palestinian Christians has dropped from 15% to 2%.

For people reflecting on reports such as this, it is all the more disturbing that the persecuted and persecutor all share religious belief-systems that not only share so much in common but all three major monotheistic religions originated in the fertile crescent of the Middle East.

What is the future for religious minorities in the Middle East?

Do they have a future?

These are questions that have been asked in Constantinople and throughout the Middle East since the seventh century. But perhaps, as Taner Akçam of Clark University points out, modern ‘ethnic cleansing’ can be traced to the genocide of Armenians in 1915, the collapse of the Ottoman Empire, and the forced ‘population exchanges’ between Greece and Turkey in the 1920s.

These questions are asked yet again in a fresh way in a new book edited by John Eibner, a Swiss-American historian who is runs the Middle East programmes of the human rights organisation Christian Solidarity International (CSI). He has brought together essays by 20 scholars, journalists, human rights activists and political practitioners who spoke in Switzerland and the US on the topic. Now they have been published together in book form.

The contributors are from diverse political, cultural, and religious backgrounds. Each draws a deep wellspring of scholarship and experience as they seek to understand the threat to religious minorities and social pluralism. The one Irish contributor is the journalist Patrick Cockburn; the one Anglican is Bishop Michael Nazir-Ali.

The future of religious minorities in the Middle East is an issue for more than Christians and Muslims. Jewish communities have all but vanished apart from within Israel. Groups such as the Alawites, the Yezidis, Druze, Kakais and Mandaeans, like Christians, struggle for survival.

In recent years, the West has focused on the threats posed by jihadist terrorism. But the delicate fabric of inter-communal relations in the Middle East has been unravelling for the past century, at the expense of religious and ethnic minorities.

As early as 2011, CSI was warning of a genocide against religious minorities and called for action. The warning followed similarly dramatic appeals by then president of France, Nicholas Sarkozy, and the former president of Lebanon, Amine Gemayel, one of the contributors to this collection. At the time, the warning was scarcely heeded. Yet, since then, the so-called Islamic State (ISIS) carried out a systemic genocide, targeting Christians, Yazidis, and Shi'ite Muslims

During a recent visit to Tangier, when I visited churches and synagogues in the Moroccan port city, I tried to convince myself that there is still hope in the Middle East and North Africa. In these papers, some of the contributors still express hope for the future, but others view the situation more pessimistically. As John Eibner writes, there are few ‘silver linings around the dark clouds … the future is grim indeed.’

This biographical note is included on p 155:

Patrick Comerford is priest-in-charge of Rathkeale and Kilnaughtin (Diocese of Limerick & Killaloe), Precentor of Limerick and Killaloe cathedrals, and a former Foreign Desk Editor of The Irish Times.