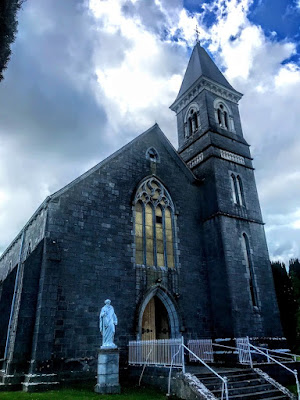 The site of the church was a gift of Henry Dawson-Damer, 3rd Earl of Portarlington, of Emo Court. He donated the site to the parish in 1861, and the parish priest of Portarlington and Emo, Father Terence O’Connell, commissioned the Dublin-based architect John Sterling Butler (1816-1885) to design a new parish church.

The architect and civil engineer John Sterling Butler was born in Dublin and was apprenticed to his father, William Deane Butler. He was elected Dublin City Architect in 1866, and was also architect to the Mendicity Institution in Dublin (1867-1873).

However, Butler appears to have been involved in a serious misdemeanour in 1878 that caused him to absent himself and then to resign the post of city architect and to have his name removed from the list of associates of the Royal Hibernian Academy.

In his letter of resignation, Butler asked the Lord Mayor and the City Council ‘to believe that, though sinning, I have been sinned against.’ He died in Paris on 29 June 1885. 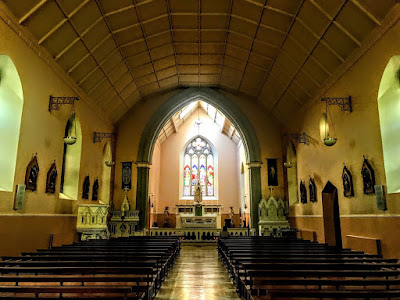 The foundation stone for Saint Paul’s Church was laid on 18 June 1861, and the church was dedicated on 16 September 1866.

This is a Gothic Revival church, set back from road in own grounds, has a bell tower and spire, and the tower has a pyramid-shaped roof.

The other architectural features include tooled buttresses, lancet-arch windows with limestone surrounds and mullions, a pointed-arched doorway with a timber panelled double door, stained glass windows, the marble pulpit, a first-floor gallery, a coffered ceiling, a chancel arch, clustered columns, and a marble reredos, limestone steps at the front door, a Pieta inside the main door, and a statue of Saint Paul outside this door. 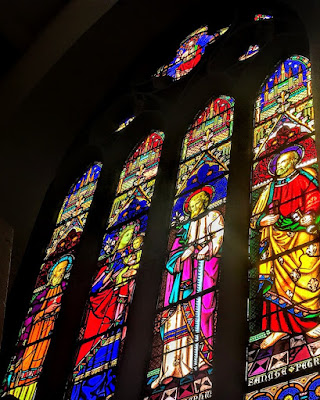 The east window above the High Altar shows Saint Paul (left) and Saint Peter (right) on either side of the Virgin Mary and Saint Joseph. 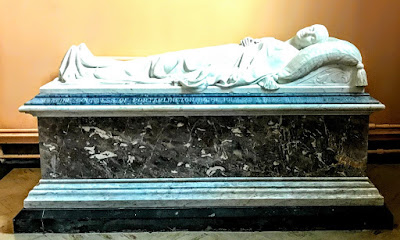 The effigy of the Countess of Portarlington is the work of the sculptor Sir Joseph Boehm (Photograph: Patrick Comerford, 2019)

However, the most interesting detail inside the church is the life-size Carrara marble monument to the Countess of Portarlington by the sculptor Sir Joseph Boehm. The monument was commissioned by Lord Portarlington in 1875 in memory of his wife.

Lady Alexandrina Octavia Maria Vane (1823-1874), who was born on 29 July 1823, was a daughter of Charles William Vane, Marquess of Londonderry (1778-1854).
Her father, a half-brother of Lord Castlereagh, was reputed to be one of the richest men in the United Kingdom, and she was named after her godfather, Tsar Alexander I, a grandson of Catherine the Great. 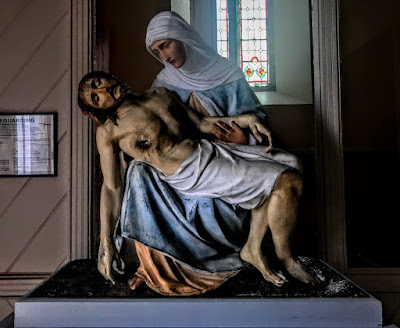 The Pieta inside the door of Saint Paul’s Church, Emo (Photograph: Patrick Comerford, 2019)

The countess became a Roman Catholic in 1867. She was 51 when she suffered a brief illness, and she died on 15 January 1874. Over 10,000 people attended her funeral when she was buried in Saint Paul’s Church.

Her husband commissioned her effigy in Saint Paul’s Church. This is a recumbent figure on a plinth, and her head rests on a pillow decorated with the coat-of-arms of the Earls of Portarlington and their motto (Vitae Via Virtus, Virtue is the way of life).

The effigy is the work of the Viennese-born sculptor Sir Joseph Edgar Boehm (1834-1890), best known for his marble statue of Queen Victoria at Windsor Castle (1869), his Jubilee head of Queen Victoria on British coins (1887), and his statue of the Duke of Wellington at Hyde Park Corner (1888).

One of his best-known pupils was Queen Victoria’s sculptor daughter, Princess Louise, whose work includes a likeness of Queen Victoria on the west façade of Lichfield Cathedral. 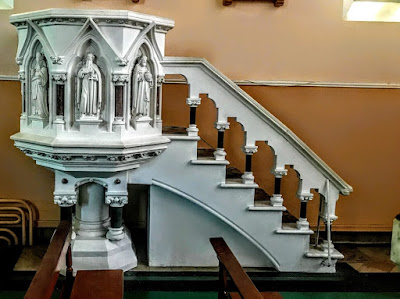 In Ireland, Boehm worked extensively at Curraghmore, Co Waterford, for the Marquess of Waterford, including the marble effigy in Clonagam Church, Portlaw, of Lord Waterford’s wife, Florence Grosvenor Rowley (1844-1895), who died in childbirth. His bust of 1890 of WEH Lecky (1838-1903) is part of the historian’s monument in the south aisle of Saint Patrick’s Cathedral, Dublin.

Lady Aline’s widowed husband unveiled her marble effigy in Saint Paul’s Church in May 1875. A year later, her brother-in-law, the Duke of Marlborough, became Lord-Lieutenant of Ireland (1876-1880).

The ‘pony stables’ across the street from the church is an unusual building. In 1918, James Dunne of Kilbride House donated these shelters that were used by parishioners attending mass to tie up their ponies and horses. A smaller shed was used by parishioners for bicycles. 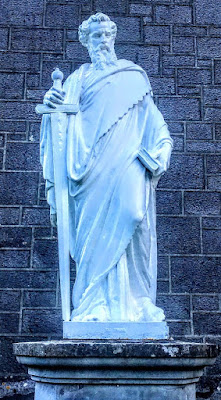 I saw the shoes for tying the horses,I haven't come across as many shoes, I did see a hand full here and there