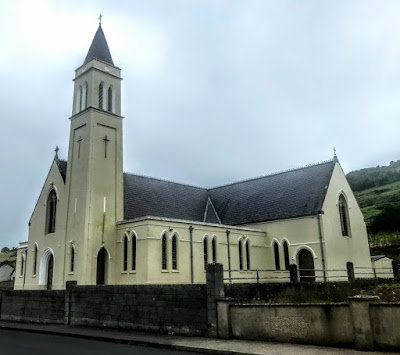 The Church of Saint John the Baptist is built into the side of the Hill of Nicker above Pallasgreen in Co Limerick (Photograph: Patrick Comerford, 2019)

As two of us were exploring the villages, country lanes and crossroads of East Co Limerick during this bank holiday weekend, curiosity made it impossible not to follow the signposts from Pallasgreen that pointed to Nicker and Nicker Church.

Nicker is just four minutes or 1.6 km from Pallasgreen, Co Limerick, just off the Limerick-Tipperary road. The name Pallasgreen means ‘the Stockade of Grian,’ and refers to a mythological Irish goddess of love who was said to have her home on the nearby Hill of Nicker.

Nicker Hill is the highest of the local group of volcanic hills that extends into Kilteely-Dromkeen. This is one of the most important carboniferous volcanic districts in these islands.

Nicker Church is a stylised, neo-Gothic church built in the mid-19th century. Nicker Church is one of two churches in Pallasgreen, the other being Saint Brigid’s Church at Templebraden.

The Church of Saint John the Baptist is a striking church standing on a prominent height in the small village of Nicker and is visible across the surrounding countryside, making it a focal point on the landscape in this part of East Limerick. 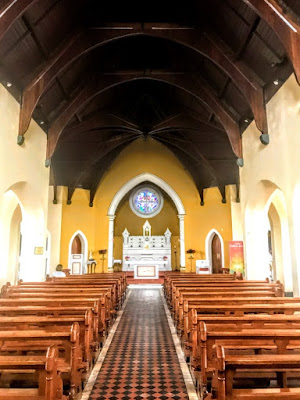 Nicker Church an early example of a pre-Emancipation church in the Diocese of Cashel and Emly (Photograph: Patrick Comerford, 2019)

The church is oriented on a west/east axis rather than the traditional, liturgical east/west axis. It has a gable-fronted, double-height nave and a square-plan, four-stage bell tower at the east (liturgical west end). The other notable features include the render stringcourses and the hood mouldings. 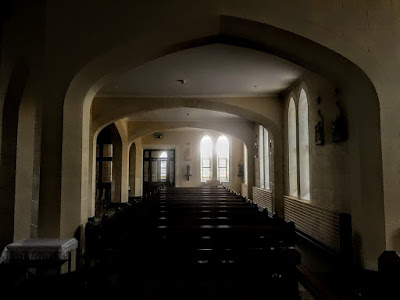 One of the side aisles in Nicker Church (Photograph: Patrick Comerford, 2019)

There are single-bay transepts, an entry porch on the south (liturgical north) side, two single-storey flat-roofed aisle extensions and gabled end bays on each side.

There is a single-bay lower gabled chancel at the west (liturgical east) end, and flat-roofed sacristy extensions on each side of the chancel. 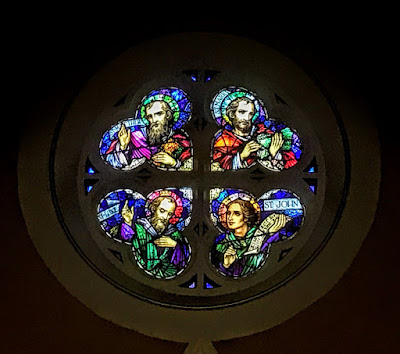 Depictions of the Four Evangelists in the oculus in the chancel (Photograph: Patrick Comerford, 2019)

There are double-leaf timber battened doors, pointed arch openings, hood-mouldings, timber pews, rendered octagonal-profile columns supporting pointed arches that separate the central section of the church from the side aisles, a timber gallery, side altars and arch brace trusses. 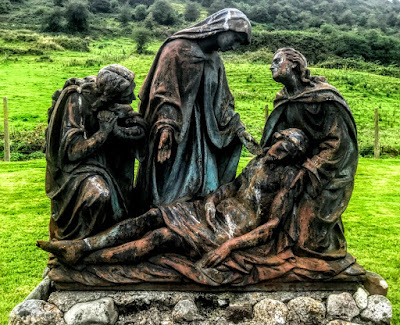 Station XIII, ‘Jesus is taken down from the Cross’ … the ‘Way of the Cross’ in the side of the Hill of Nicker above Nicker Church (Photograph: Patrick Comerford, 2019)

The outdoor ‘Way of the Cross’ at Nicker Church climbs up the hillside that loom above the church and is said to be an exact scale replica of a similar set of Stations of the Cross in Jerusalem. But Stations I and II were never delivered and remain missing, while Station XIV, ‘Jesus is laid in the Sepulchre,’ is without any sculpture and represents the empty tomb.

Below the Stations of the Cross, a grotto has been opened into the sheer cliff-face. 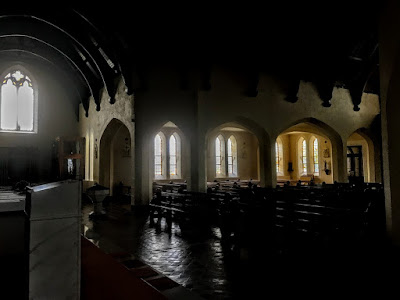 Inside Nicker Church, which was renovated extensively in 2011-2013 (Photograph: Patrick Comerford, 2019)

Nicker Church was renovated extensively in 2011-2013, when it was upgraded, repaired and refurbished, redressing a number of inappropriate interventions over the years that left the church in a poor state of repair and following a serious outbreak of dry rot in the kingpost roof trusses.

The parish priest in Nicker is Father Patrick Burns. Masses on Saturday evenings are at 6.30 and on Sunday mornings at 11.30 a.m. 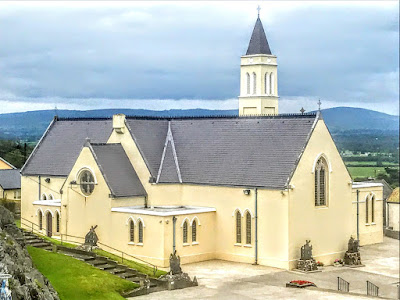 The Church of Saint John the Baptist is a striking church standing on a prominent height in the small village of Nicker (Photograph: Patrick Comerford, 2019)