Finding links between
the Comerfords of Galway
and Padraic Ó Conaire 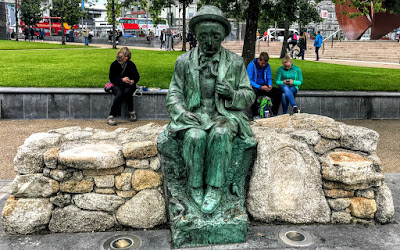 I have often stopped to photograph the statue in Eyre Square, Galway, of Padraic Ó Conaire, one of the great writers of early 20th century. His novella Deoraíocht has been described as ‘the earliest example of modernist fiction in Irish.’

The statue, and its story, have romanticised the life of Padraic Ó Conaire. But, in reality, his life was a story that was as tough and gritty as many of his novels. He was a drop-out at school, his marriage was marked by tragedy, including the death of one of his children, he abandoned a lowly position in the Civil Service in London, and ended his days in alcoholism, dying a lonely death in a psychiatric hospital in Dublin.

If his statue in Galway, and the vandalism it has suffered, truly depict the writer and his life, few who look it realise that he came from a middle-class Galway family of merchants, politicians, judges and teachers.

A visit to Galway earlier this year prompted me to return to historical and genealogical research by others that shows Padraic Ó Conaire was descended from the Galway branch of the Comerford family, a well-known Galway family of ship-owners, merchants and military doctors.

Patrick Conroy of Garafin House, Rosmuc, Co Galway, who was the father of at least three sons:

1, Patrick D Conroy of Garafin House, Rosmuc, Co Galway, a Justice of the Peace, farmer and provision merchant.
2, Thomas Conroy (1836-1888), of whom next.
3, (Ven) Mark David Conroy. He was ordained in 1884 and was Administrator of Carraroe and Lettermullen (until 1891), curate of Saint Nicholas Pro-Cathedral (1891-1893), Parish Priest of Killanin, Archdeacon of Galway and Parish Priest of Oughterard. He died on 19 August 1947 and was buried in Oughterard.

Thomas Conroy (1836-1888) of High Street, Galway. He was born at Garafin, Rosmuc, Co Galway. He married Kate McDonogh daughter of Michael McDonogh and his wife Mary Comerford. They were married in Saint Saviour’s Church, Dominick Street, Dublin, on 26 April 1881. At the time he said he was aged 29, and she said she was aged 17. 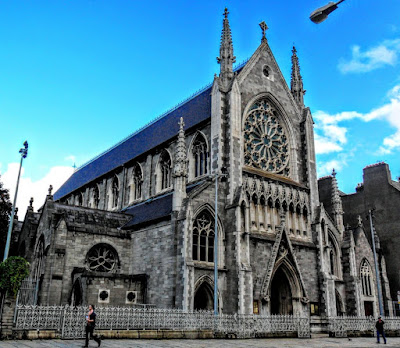 I shall return to the Conroy family soon. But it is worth turning to the McDonagh family, because this link leads to Padriac O Conaire’s descent from the Comerford family.

Kate McDonagh was a direct descendant of Raymond McDonagh of Lettermullen, Co Galway, who was the father of at least two sons:

Thomas McDonogh (1836- ), was born on Gorumna Island, Co Galway in 1836. He married Honoria Hernon from Inis Mór, the Aran Islands.

Thomas and Honora McDonogh were the parents of:

Soon after the birth of their son Martin, Thomas McDonagh and his family moved into Galway, where Thomas took up a position as foreman or manager in Comerford’s sawmills. He was made a partner in the firm and by the early 1870s the business was trading as McDonogh & Comerford.

Thomas’s brother Michael, who was married to Mary Comerford, died in November 1878. As there was no member of the Comerford family to take over the business, Thomas stepped in and assumed full ownership and management of the company and put his own name over the door.

Thomas and Honoria rented a three-storey house facing the Custom House at the end of Flood Street in June 1867. She then leased the vacant corner building next door facing New Dock Street, where she set up a successful shop.

Thomas set up a steam sawmill and imported a variety of building materials and guano, a natural manure originating in South America composed chiefly of the excrement of seabirds and used by Irish farmers as a fertiliser.

Martin McDonogh or Máirtín McDonogh (1860-1934), was born on Gorumna Island in 1860 and was educated in Saint Ignatius College, the Jesuit school in Galway and Saint Stanislaus College, Tullabeg, Co Offaly. He studied briefly at University College Galway but left when his father took over the Comerford business.

He was described by Stephen Gwynn MP: ‘All of the men of the family were big, but he was huge: people would come twenty miles on a Sunday to see Máirtín McDonogh doing feats of strength. But he burst a blood vessel in one of those weight-liftings and the leg never healed properly, so that for fifty years his bulk could only be kept down by diet and exercise. But even in old age he gave the impression of elephantine strength – and not always an approachable elephant.’

He was known throughout Galway as Máirtín Mór, was physically imposing, a natural entrepreneur and a man of drive, ambition, and no small intellect, he took over his father’s company and expanded it to the extent that he became the largest employer in Connacht.

As well as a merchant and industrialist, he was a farmer and politician, and his colourful life is told by Dr Jackie Uí Chionnaith in his book, He Was Galway (Dublin: Four Courts, 2016).

McDonogh inherited his father’s company, Thomas McDonogh & Sons, and expanded it to become one of the biggest employers in Connacht. At its height, the company employed 700 people in business ventures from a fertiliser factory to farming and electricity generation.

McDonogh was first elected to Dáil Éireann as a Cumann na nGaedheal (now Fine Gawl) TD for Galway in June 1927. He was re-elected in September 1927, lost his seat in 1932, re-gained it in 1933, and was a TD when he died on 24 November 1934. The by-election caused by his death was won by Eamon Corbett of Fianna Fáil. A strict teetotaller, he never married. 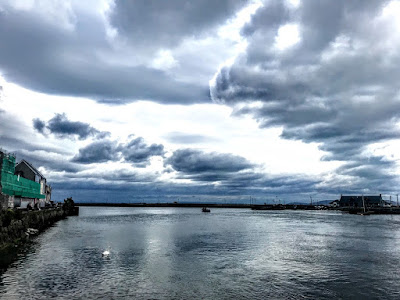 The banks of the River Corrib, leading out to Galway Bay (Photograph: Patrick Comerford, 2019)

Michael McDonogh ( -1878) married Mary Comerford. These Comerfords were well-known in Galway commerce and shipping. Some genealogists have asked whether Mary may have been related to George Comerford (born ca 1846-1859), of Doonbeg, Co Clare. The obituary of her grandson, Isaac Conroy, shows she was a sister of Dr George Comerford and Surgeon-Colonel Henry Comerford (1844-1905). Her sister, Jane Comerford (born 1841), married James O’Flaherty of Lettermullen in 1862.

This probably means Mary was a daughter of Isaac Comerford (1796/1797-1865), merchant and shopkeeper, of Kinvara and Galway, and the names Isaac and Henry continued among her descendants.

Michael McDonogh and Mary Comerford were the parents of nine children, five daughters and four sons, including four daughters who later lived in West Clare:

The first-born child and eldest daughter:

These three sons were born on High Street, Galway, where their parents lived and had a shop, later known as ‘the old Malt House.’ Both parents died while the boys were young: Thomas emigrated to the US, where he died on 8 June 1888; settled Kate died unexpectedly on 8 June 1893.

The third named son was:

Isaac Aloysius Conroy (1886-1942). He was born 2 July 1886, on High Street, Galway. His obituary in local newspapers show he was a grandnephew of Surgeon-Colonel Henry Comerford (1844-1905) from Galway and nephew of Archdeacon Mark Conroy, Parish Priest of Oughterard.

At the 1901 census, Isaac Comerford was 14 and living with his uncle, Patrick D Conroy, a Justice of the Peace, farmer and provision merchant, at Garafin House, Rosmuc, Co Galway. He was educated at Blackrock College, Co Dublin.

He was in the British merchant navy and then a traveller or sales representative for many leading Galway businesses, including Thomas McDonogh & Sons Ltd, McDonogh’s Milling and Trading Co Ltd, and McDonogh’s Fertilising Co Ltd. He married Margaret George (1886-1927), in 1910 in Neath, Wales. He died at Shantalla, Galway, 27 April 1942, aged 55. They are buried with his brother, Pádraic O Conaire, in Bohermore Cemetery, Galway.

1, Francis (Frank) Conroy, who married and was the father of two daughters: Bronwyn and Virginia.

Padraic O Conaire (1882-1928), was born Patrick Joseph Conroy on 28 February 1882 in High Street, Galway. He was educated at the Presentation Convent, Galway, Rockwell College, Cashel, Co Tipperary, and Blackrock College, Co Dublin. His brother Isaac had the duty of accompanying the boy infant to school. Padraic spent a considerable time at Rosmuc, at his grandfather’s home, and later attended Blackrock College.

His first short story, ‘An t-Iascaire agus an File’ (‘The Fisherman and the Poet’), was published in An Claidheamh Soluis in 1901. Widely read and influenced by European literary models, Ó Conaire wrote in simple, direct Irish about the grim reality of life in contemporary Ireland, dealing with themes such as poverty, emigration, isolation, vagrancy, alcoholism, despair and mental illness.

He published his novella Deoraíocht (‘Exile’) in 1910 and his collection of short stories An Chéad Chloch (‘The First Stone’) in 1914 to great acclaim. Deoraíocht has been described by Angela Bourke as ‘the earliest example of modernist fiction in Irish.’

He died destitute in Richmond Hospital, Dublin, on 6 October 1928, aged 46. He was buried in the New Cemetery, Galway, with his brother Isaac and his wife Margaret. Mary Conroy is also buried in the same grave.

A statue of Ó Conaire was unveiled by Éamon de Valera in Eyre Square in Galway in 1935. It was popular with local people and tourists alike until it was decapitated by four men in 1999. It was repaired at a cost of £50,000 and moved to Galway City Museum in 2004. A bronze replica of the statue was unveiled in Eyre Square in November 2017.

A first cousin of Isaac Conroy and Pádraic Ó Conaire was John Charles (‘Charlie’) Conroy (1906-1985), lawyer and judge, a member of many government commissions of inquiry and of the Law Reform Commission, and president of the Irish Rugby Football Union (1972-1973). 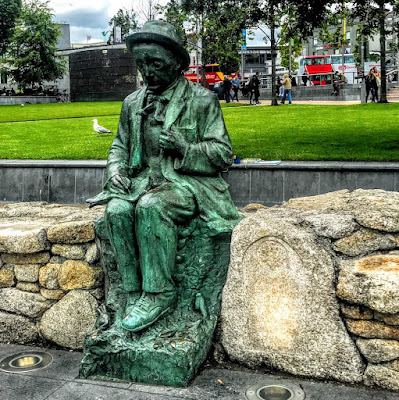 I am grateful to Patrick Waldron for pointing me to some sources for this essay.

Apart from civil and church records, and my own research on the Comerford family of Co Galway, other sources include: