2, The concentration camp at Auschwitz in Poland was liberated 75 years ago this month, on 27 January 1945.

4, When I was a boy, I read Anne Frank’s diary. Does anyone keep a diary? When I first read this book, I was 14, about the same age as Anne Frank was when she died. Some of my friends at the time thought I was a bit of a sissy for reading a book by a girl. But this is one of the best-known books in the world.

5, Anne Frank was a girl of 10 when World War II began … the same age as some of you, a little older than some of you. She was born in Frankfurt in Germany over 90 years ago, in 1929. When she was 4½, the Nazis seized power in Germany, and her family moved to Holland, to Amsterdam. They were Jews, and they thought they would be safer.

7, But the Frank family was betrayed and arrested two years later in August 1944, and sent to concentration camps. Anne and her sister Margot were moved from Auschwitz to Bergen-Belsen, where they died of typhus 75 years ago, in February or March 1945.

8, Her father, Otto Frank, survived Auschwitz and returned to Amsterdam in June 1945. Her diary was first published in English in 1952, seven years after she died.

9, Over 6 million Jews were killed in the concentration camps. I will be remembering them, and the survivors, and Anne Frank, in London next Monday.

10, We remember people who died in the Holocaust not only to honour them, or to read about them, but so that this should never happen again.

Anne Frank: Parallel Stories, a retelling of Anne Frank’s life guided by the Academy-Award winning actress Helen Mirren, is in cinemas for a limited time only, starting on 27 January, Holocaust Memorial Day. 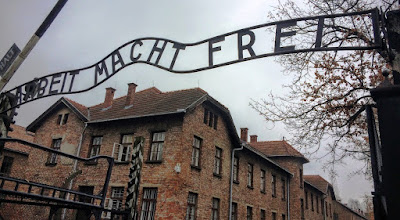