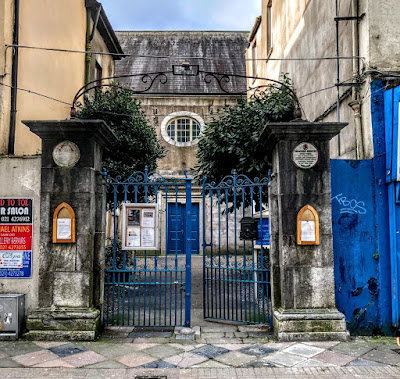 The Unitarian Church at 39 Prince’s Street, Cork, is in the heart of the city centre (Photograph: Patrick Comerford, 2020)

The Unitarian Church at 39 Prince’s Street, Cork, is in the heart of the city centre, beside one of the entrances to the English Market, but when it was built it was outside the crumbling mediaeval walls of the city.

The church opened as the ‘Old Presbyterian Church’ or meeting house in August 1717 and claims to the oldest place of continuous worship in Cork: although Saint Fin Barre’s Cathedral (Church of Ireland) stands on a much older site, the present building was completed in 1879; the Cathedral of Saint Mary and Saint Anne was built in 1808 and rebuilt in 1828; and Saint Anne’s Church (Church of Ireland), Shandon, was built on the present site in 1722-1726.

Building work on what became the Unitarian Church began around 1711 in an area then called Dunscombe’s Marsh, outside the city walls. It was built as a dissenting Presbyterian meeting house to replace a smaller church in Watergate Lane, now South Main Street, that the congregation had outgrown. 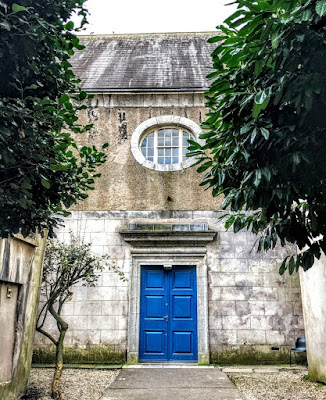 The church claims to the oldest place of continuous worship in Cork (Photograph: Patrick Comerford, 2020)

Hard rock and rubble had to be brought into the area to secure the foundations and reclaim the land, and so it took around five years to build the church.

Like all dissenting chapels or meeting houses, the interior design was simple, lacking the more ornate designs associated with Anglican and Roman Catholic churches at the time. The church was a plain meeting house, designed for the congregation to hear the minister. A balcony ran around three sides of the building, and it could seat up to 800 people. The buildings to either side were the minister’s manse and a school.

The new church opened on 4 August 1717, and the first service was led by its minister, the Revd Samuel Lowthian.

The gallery and the clock inside the church (Photograph: Patrick Comerford, 2020)

A document dated 8 January 1719, signed by James Weekes, asks the Bishop of Cork, Peter Browne, to approve the registration of the meeting house on Dumscomb’s Marsh, Cork, under the 1719 Act.

At the time, Presbyterians in Ireland were not organised into one single church body, and by the early 18th century divisions were emerging among Presbyterian ministers over subscribing at their ordination to the Westminster Confession, although the Synod of Munster never subscribed to it.

These divisions would lead to the formation of the Presbytery of Antrim in 1725 and the Remonstrant Synod of Ulster in 1830. These two bodies joined with the Synod of Munster in 1835 to form the Association of Irish Non-Subscribing Presbyterians. The Non-subscribing Presbyterian Church of Ireland was consolidated in 1910 when the Presbytery of Antrim, the Remonstrant Synod of Ulster and those congregations that had formed the Free Congregational Union formed the General Synod.

By 1910, only three congregations of the original Synod of Munster remained in the south of Ireland, including the church in Cork. Although the Synod of Munster was and remained a member of the Association of Irish Non-Subscribing Presbyterians, it did not formally join the General Synod until 1935.

The Unitarian Church in Cork continues to have a formal association with the Non-Subscribing Presbyterian Church in Ireland to this day.

The church on Prince’s Street soon became known as the ‘New Meeting House’ but was also known as the ‘Old Presbyterian Church,’ and was one of the first buildings on reclaimed marsh to the east of the medieval walls of Cork.

A list of ministers in Prince’s Street from 1670 to 1961, notes that five were Unitarian ministers, but 13 were Trinitarian. The House of Lords was told that for many years there were two preachers in the chapel, one Trinitarian and one Unitarian. 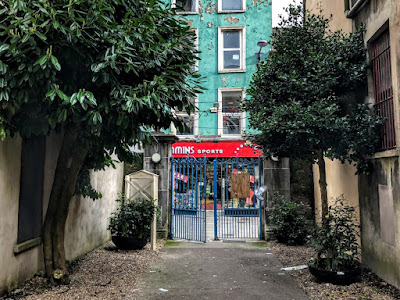 The chapel in Prince’s Street was at the centre of debates and divisions within Irish Presbyterianism (Photograph: Patrick Comerford, 2020)

One of the former ministers of the church, the Revd Thomas Dix Hincks (1767-1857) The divisions among Presbyterians become more difficult in Cork when the Revd Thomas Dix Hincks (1767-1857) was appointed to the church and came to be debated in the House of Lords. Hincks was a known Unitarian and was appointed an assistant to the Revd Samuel Perrott in Cork. However, the Presbytery of Munster refused to ordain him, and eventually he was ordained by the Presbytery of Dublin in 1792.

Hicks remained in Cork until 1814, and was the founder of the Royal Cork Institute. Two of his sons were Church of Ireland priests: the Revd Dr Edward Hincks (1792 -1866), who is commemorated in a plaque by the church gates, was the Rector of Killyleigh, Co Down, and a distinguished Oriental and Greek scholar; the Ven Thomas Hincks (1796-1882) was Archdeacon of Connor from 1865. 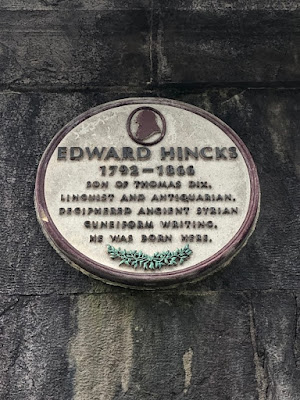 A memorial at the church gates to the Revd Dr Edward Hincks a distinguished Oriental and Greek scholar (Photograph: Patrick Comerford, 2020)

Many of the members of the congregation left to join Trinity Presbyterian Church, a ‘subscribing’ Presbyterian congregation formed in 1830, and popular with Scottish immigrants at the time. The Prince’s Street congregation continued to meet, and to hear various clergy, including Unitarians and Trinitarians.

Members of the church in the mid-19th century include Richard Dowden (1794-1861), a Mayor of Cork and uncle of Charles Dowden, Episcopalian Bishop of Edinburgh, and the painter Daniel Maclise (1806-1870). 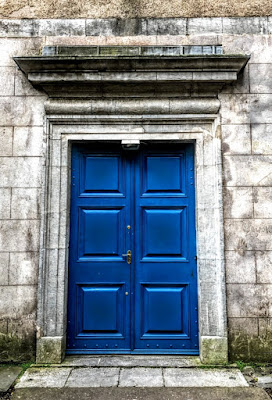 The church was threatened with closure in the late 20th century (Photograph: Patrick Comerford, 2020)

Numbers began to dwindle in the 20th century, and in 1958 Mrs Marjory Thompson of Blackrock Road was described as the only remaining Unitarian left in the city. There were plans to sell the building, and reports a grocery chain was planning to buy it and convert it into a supermarket. But the plan never went ahead because the building was listed.

The building saw little Unitarian activity until the 1990s, when a small group, including Fritz Spengeman and Dr Martin Pulbrook, resumed weekly services. The Rev Bridget Spain was the minister-in-charge from 2007 to 2017. Today the church has its own minister, the Revd Mike O’Sullivan, who was ordained in February 2017, the first Cork man to hold the position in almost 200 years.

The church celebrated its tercentenary in 2017. The celebrations a visit from President Michael D Higgins, an anniversary service attended by civic and religious leaders in the city, and the staging of a specially commissioned play to celebrate the visit Frederick Douglass in 1845. 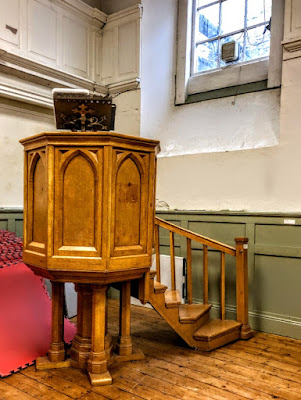 The pulpit is a gift from the Church of Ireland Diocese of Cork, Cloyne and Ross (Photograph: Patrick Comerford, 2020)

In recent years, extensive cosmetic work was undertaken on the building, including opening the ‘South Chapel,’ where services are held every Sunday. The church received a gift of a pulpit from the Church of Ireland Diocese of Cork, Cloyne and Ross.

The features in the church include early 18th-century oval windows, a semi-circular 300-year-old-gallery with its original staircase. The original pulpit was on the west wall facing east and a pillar, door and gate stood perfectly in line from there to the street outside. But the original pews, pulpit and organ were removed in the late 1990s.

The church remains one of Cork’s religious architectural gems, and the church is a growing, vibrant and inclusive community. 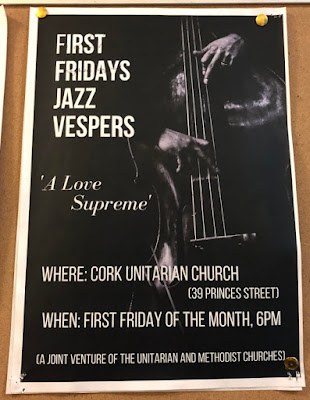 The building is used throughout the week by a variety of local groups and for hosting events from experimental rock concerts to craft fairs.

An innovative service is the ‘First Friday Jazz Vespers,’ an initiative of the Methodist and Unitarian churches at 6 p.m. on the first Friday of each month.

Prince’s Street is between Saint Patrick’s Street and Oliver Plunkett Street. Sunday services are at 11 a.m. 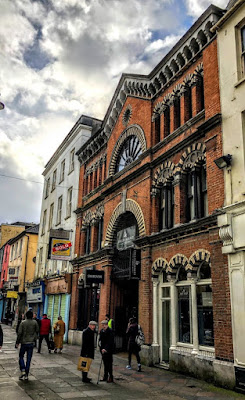 Prince’s Street, Cork, with the entrance to the English Market beside the Unitarian Church (Photograph: Patrick Comerford, 2020)