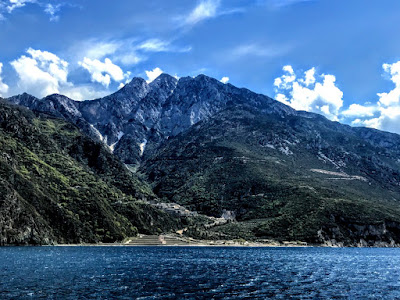 The peaks of Mount Athos reach their highest point at 2,033 metres (Photograph: Patrick Comerford; click on images for full-screen view)

I had planned to be in Greece this week for Easter, which fell last weekend in the calendar of the Greek Orthodox Church. But the fallout from the Covid-19 pandemic has cancelled all my travel plans.

I now even wonder whether I am going to get to Thessaloniki and Halkidiki at the end of August and the beginning of September, or whether I can plan to visit Crete later this year.

Meanwhile, I am offering a series of ‘virtual tours’ of favourite places in Greece. This evening, as Easter Week in Greece is coming to an end, I invite you to join me on a ‘virtual tour’ of a dozen monastic sites on the Holy Mountain of Mount Athos.

Religious goods from Mount Athos in a shop in Ouranoupolis (Photograph: Patrick Comerford)

Mount Athos is known to Greeks as the Holy Mountain (Aghion Oros) and forms an autonomous Athonite State within the boundaries of Greece. With 20 monasteries and 12 sketes or smaller monastic houses under the direct jurisdiction of the Ecumenical Patriarch of Constantinople, Mount Athos has been the spiritual and intellectual centre of Orthodoxy for centuries.

It was a two-hour, 140 km bus journey from Thessaloniki to Ouranoupolis. From there, boats sail along the west coast of Mount Athos as far as the southern tip, where the peaks of this mysterious and miraculous peninsula reach their highest point at 2,033 metres.

There are 20 monasteries on Mount Athos, known to Greeks as the Holy Mountain (Photograph: Patrick Comerford)

A succession of bays and small harbours along the coast lead to monasteries, many of them inland and not within sight. The port of Zographou leads inland to Zographou or Saint George the Zograf Monastery, founded by three Bulgarian monks from Ohrid in the late 9th or early 10th century. 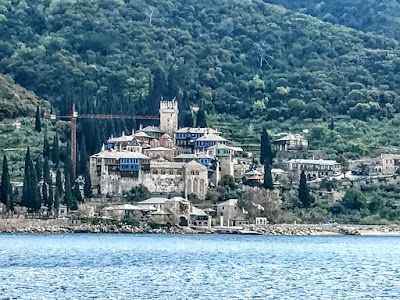 Docheiariou has been known as a Serb monastery (Photograph: Patrick Comerford)

Docheiariou, with its tall, 18th century defensive tower, looks like a fortified castle. It was founded in the 10th century and is dedicated to the Archangels Michael and Gabriel.

Since the late 15th century, this has been a Serb monastery, and today it is home to about 30 monks. 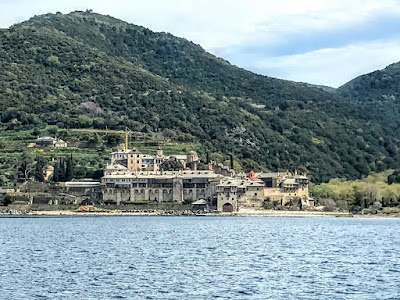 Xenophontos was founded in the 10th or 11th century by Saint Xenophon. As a monastery on the seashore, Xenophontos frequently suffered from pirate raids.

The monastery fell into financial ruin but was re-established in the 18th century. The bell tower was built in 1864. Today the community has 30 monks. 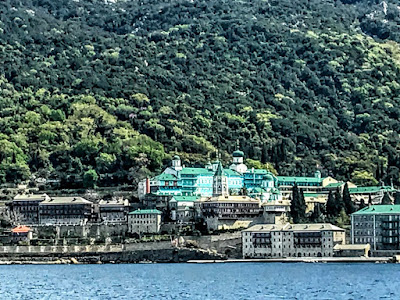 The domes of Saint Panteleimon are a reminder of Russian influences (Photograph: Patrick Comerford) 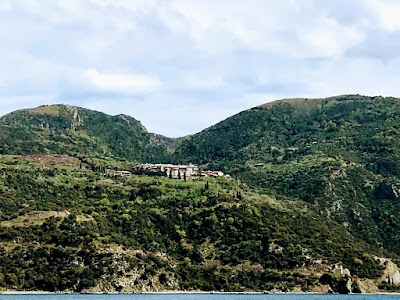 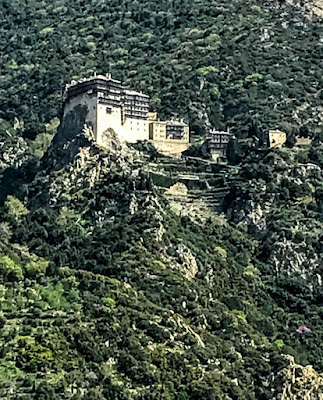 Simonopetra stands on the edge of a rocky range (Photograph: Patrick Comerford) 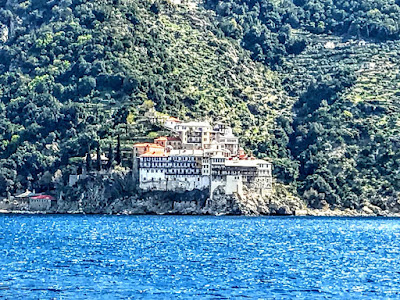 The Monastery of Gregoriou is built on a sea-washed rock with balconies overlooking the gulf below. It was founded in the 14th century by Gregory, a Syrian monk from Mount Sinai.

The monastery has about 70 monks today.

Dionysiou has a gilded sanctuary screen and frescoes depicting scenes from the Book of Revelation (Photograph: Patrick Comerford) 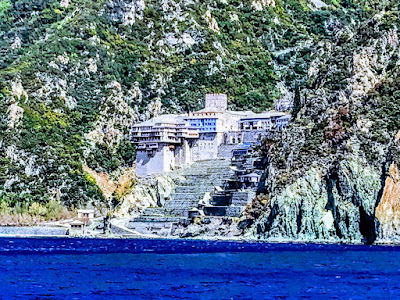 Saint Paul was endowed by the Serbian-born wife of the Sultan Murat II, who brought the gifts of the Three Wise Men (Photograph: Patrick Comerford)

Saint Paul or Aghiou Pavlou was founded by Saint Paul of Xeropotamou, who also founded Xeropotamou. The monastery was deserted in the 14th century, but was restored by Serbian nobles, Byzantine emperors, Danubian princes and Romanian and Greek benefactors. Catastrophes in 20th century included a fire in 1902 and a flood in 1911. 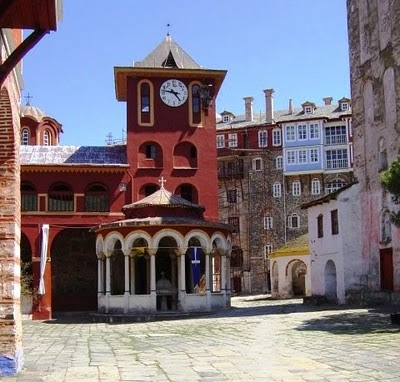 I stayed in Vatopedi during Easter week in 2004. This monastery was built in the late 10th century by three monks, Athanasius, Nicholas and Antonius from Adrianople, who were pupils of Saint Athanasius of Lavra. The most important buildings were built in the Byzantine period and in the 18th and 19th centuries, when the monastery reached its highest peak.

The main church has the only existing mosaics on Mount Athos, while its frescoes, dating from ca 1312, are attributed to Manuel Panselinos from Thessaloniki. About 50 monks live today in the monastery, which is knwn for its learning and scientific research. 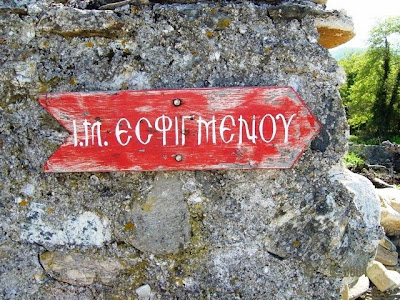 During my visits to Mount Athos, I have also seen many of the smaller houses that are dependencies of the larger monasteries, including Kelli Ayiou Modestou, Skiti Monoxilites, and Metochi Chourmitsis, an outlying farm belonging to Panteleimon, where the once abandoned vineyards have been developed in recent years by the Tsantalis label, producing organic wines and spirits. 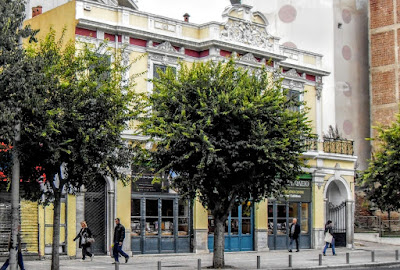 The offices of Mount Athos on Egnatia Street in Thessaloniki … visitors need a special permit or visa (Photograph: Patrick Comerford)

Only men may visit Mount Athos, all visitors need a special permit or diamoneterion, priests need a special invitation from the Ecumenical Patriarch, and the Holy Mountain is forbidden to women and children.

The monastic community maintains an office in Egnatia Street in Thessaloniki, where permits or visas are issued. Normally, the Pilgrims’ Bureau issues only 10 permits a day for non-Orthodox visitors and 100 for Greeks and Orthodox visitors. These permits are valid for a four-day visit on specific dates.

This means that for all women and for many men too, the only way to visit Mount Athos is to take one of the many day trips around the coast organised by tour operators based in Ouranoupolis.

In this small harbour, there are many cafés and tavernas, and shops selling souvenirs and icons made by the monks on Mount Athos. 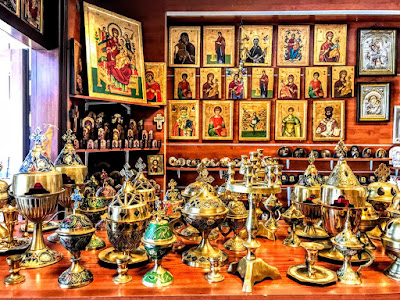 Icons and religious goods made on Mount Athos on sale in Ouranoupolis (Photograph: Patrick Comerford)