A small pier outside
Ballylongford is part
of Shannon heritage 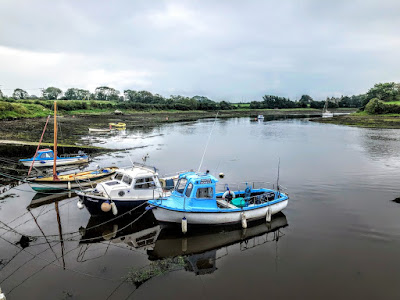 Small boats in the harbour at Saleen Pier … the ruins of Lislaughtin Abbey are above the bank in the distance (Photograph: Patrick Comerford, 2020)

Sunday was a rain-soaked day, and after the church services in Askeaton and Tarbert on Sunday morning, and the Easter Vestry meeting in Tarbert, two of us decided against going on to Ballybunion in the rain. Instead, we headed west along the old coast road past the church ruins at Kilnaughtin, and we found ourselves for the first time at Saleen Pier, just north of Ballylongford, below the ruins of Lislaughtin Abbey.

Ballylongford (Béal Átha Longphurit) in north Co Kerry is a little inland from the south side of the Shannon Estuary. Among the people born in Ballylongford are the poet Brendan Kennelly, the general Lord Kitchener, and Michael Joseph O’Rahilly (1875-1916), a key figure in the Easter Rising in Dublin in 1916 who called himself ‘The O’Rahilly.’

Ballylongford first developed in the late 18th century as small ports developed as safe havens along the shores of the Shannon Estuary in counties Limerick, Clare and Kerry.

Old Ordnance Survey maps show Saleen Pier and a boat quay, with a Collector’s Office and a Coast Guard station. In some illustrations the name Saleen is spelt ‘Sawline.’

Mudge’s father was General William Mudge (1762-1820), a godson of Samuel Johnson. General Mudge was an artillery officer and the surveyor who was an important figure in the work of the Ordnance Survey and the principle figure in the development of measuring the degrees of longitude and the arc of the meridian. 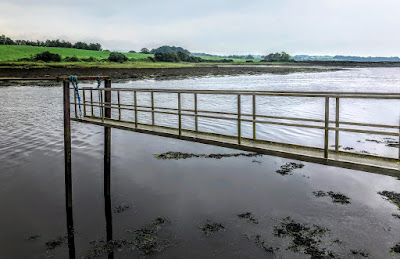 Many of the harbours and quays along the Shannon Estuary were planned by the admiralty surveyor Commander William Mudge (Photograph: Patrick Comerford, 2020)

Commander Mudge was appointed to conduct the survey of the coast of Ireland around 1825. He first proposed building or improving piers or quays at Ballylongford and also at Kilrush, Carrigaholt, Tarbert, Querrin, Glin, Foynes, Kilteery, Cahercon (Kildysert), Clare (now Clarecastle), the River Deel to Askeaton and the River Maigue to Adare.

Saleen Pier was planned as the new port for Ballylongford, and the works at Saleeen cost £1,811. Of this, almost half (£891) came as a government grant and the rest came from the three principal landed proprietors in the area: Stephen Edward Colles, £504; the representatives of M Black, £185; and Trinity College Dublin, £230. The amounts omit shillings, so there is a difference of £1 between the total and the sum of the contributions.

When Commander Mudge died in Howth on 20 July 1837, he was buried in the churchyard at Howth. In the decade that followed, Saleen Pier was completed around 1843-1844 at a point where Ballyline River flows into the Shannon Estuary at Ballylongford Creek. The crane at Saleen was built by Clarke of Ringsend, Dublin. 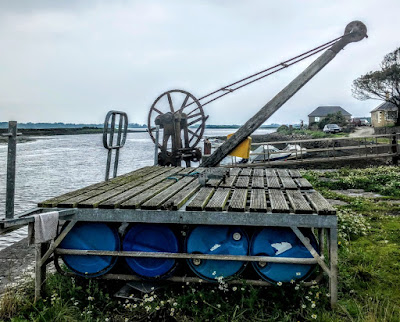 The crane at Saleen Pier was built by Clarke of Ringsend, Dublin (Photograph: Patrick Comerford, 2020)

Saleen Pier continued to serve commercial traffic on the Shannon for over a century, with boats and trading vessels travelling to and from Scattery Island, Kilrush, Limerick and other points along the river. There are even accounts of emigrant boats leaving Ballylongford for North America.

Saleen Pier was in commercial use at least until 1953. The Limerick Harbour Commissioners maintained a register of vessels trading on the Shannon in 1945-1953. This register shows that the last trading vessel to use Saleen Pier was the St Senan. It left Limerick on 29 September 1953 for Kilrush and Ballylongford, carrying 55 tons of general cargo.

Unlike other piers and harbours, Saleen Pier seems never to have been transferred to the local authorities by the Commissioners of Public Works or Board of Works under the terms of the Shannon Act 1885.

Opposite the pier, the ruins of Lislaughtin Abbey stand above the bank of the Ballyline River, around the riverbend below Saleen Pier. Further downriver, to the north, the ruins of Carrigafoyle Castle can be seen closer to the Shannon Estuary.

Ballylongford Boat Club leases the shed at Saleen Pier, the Crane and Pontoon remain in place, and the Customs Office is still in use. 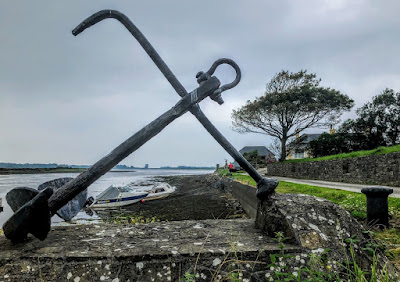 From Saleen Pier, we continued on to Lislaughtin Abbey, strolling through the mediaeval ruins and the graves, including the high cross erected to the memory of the family of ‘The O’Rahilly.’

On our way back to Tarbert, a brown road sign pointed to Kilcolgan Strand. But the narrow road ended in a cul de sac, with a gate blocking any further journey and no apparent path to shoreline below.

We stopped for coffee at the museum in Foynes before returning to Askeaton late on Sunday afternoon. 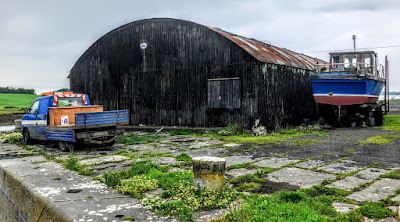 Ballylongford Boat Club is based at the shed at Saleen Pier (Photograph: Patrick Comerford, 2020)