Stewick House, a former
Famine workhouse on
a hillock near Askeaton 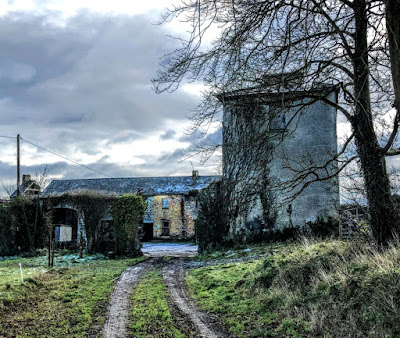 Stewick House is an interesting site on the main road into Askeaton, Co Limerick, standing in crumbling isolation on a hillock in Ballyengland, south of the N69 road from Limerick and east of Askeaton.

It has a strong impact on the landscape and was originally built as country house ca 1790 for a branch of the Hewson family of nearby Castle Hewson. But Stewick House is still remembered in the area as Famine-era ‘workhouse’ in the mid-19th century.

After visiting Castle Hewson last week, two of us visited the crumbling Stewick House, or Stewick Fort. It stands on land owned by the O’Shaughnessy family, and local lore also says hidden treasure was once hidden on the site.

Although the house is now crumbling and in a state of disrepair, it remains an imposing, landmark building, and it retains much of its original imposing form, including the courtyard that adds context and heightens the impact of the building.

Architectural features in the buildings include cut limestone sills, surrounds and voussoirs, which indicate a high level of craft and skill in the original building of the house and its former importance in this area. 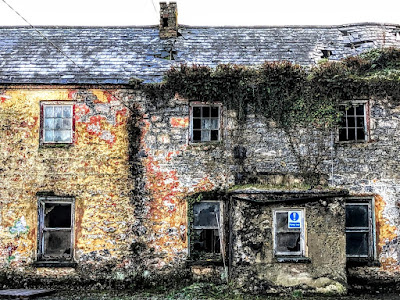 Stewick House was built in the 1790s for a branch of the Hewson family of nearby Castle Hewson (Photograph: Patrick Comerford, 2021)

This is a detached, L-plan, six-bay, two-storey country house, built ca 1790. It has a split-level main block with a multiple-bay two-storey block to east.

There is a square-profile single-storey porch at the north side of the extension. The hipped slate roof has terracotta ridge tiles, and there are rendered chimneystacks and cast-iron rainwater goods.

Th multiple-bay block has a pitched slate roof and red brick chimneystacks. There are roughcast rendered walls, and rubble stone can be seen in places.

There are square-headed window openings throughout, with cut limestone sills and red brick voussoirs, some with one-over-one pane timber sliding sash windows, and some with timber framed windows.

There are segmental-arched window openings on the north side of the rear block and the east side of the main block, with red-brick voussoirs.

The square-headed window openings on the east side of the main block have cut limestone surrounds and voussoirs, some with timber battened doors.

The square-headed opening on the west side of the porch has a timber battened door.

Outbuildings surround the courtyard at the rear.

The boundary wall has a segmental-arched opening at the north of courtyard with a cut limestone surround, voussoirs and a keystone. 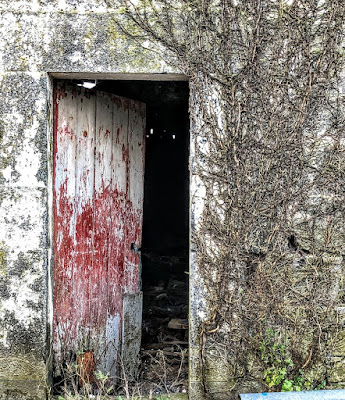 Stewick House was built for a branch of the Hewson family of nearby Castle Hewson. William Hewson was living at Castle Hewson in the 1840s, while Stewick House was the home of his brother, George Hewson, a barrister, and his wife Laura (née Brown), daughter of John Southwell Brown of Shannonview, near Ballysteen.

At the height of the Great Famine of 1845-1849, the Poor Law Commissioners leased Stewick House and 10 acres, including the out-offices, from George and Laura Hewson in 1848 at annual rent of £75.

In the previous year, when the Rathkeale Board of Guardians met in the boardroom of Rathkeale workhouse in October 1847, 3,000 ‘peasants’ from Glin, Shanagolden, Pallaskenry and Askeaton surround the institution and demand assistance from the master. The crowd tried to demolish the poorhouse and, according to the Limerick Chronicle, ‘rioted on the military.’

The members of the Rathkeale Board of Guardians resigned later that month to protest against the policy of making the most vulnerable categories of paupers leave the shelter of the workhouses. 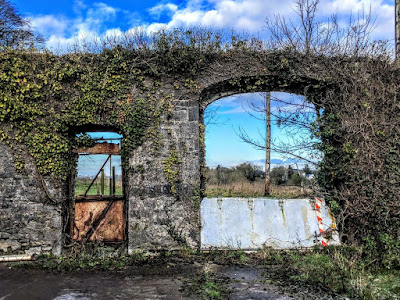 However, Stewick was not one of the customary workhouses as we think of them. There was a workhouse in Askeaton at Brewery Lane, and Stewick House became a model agricultural school for boys under the age of 15. 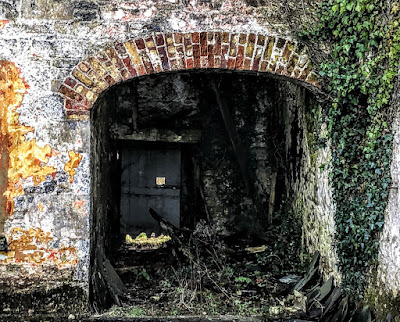 William Bourke was replaced in 1850, and the workhouse in Ballyengland became a model farm that was to ‘instruct the boys in the most improved and useful principles and practice of agriculture.’

The model farm and school were supported by the Commissioners of National Education, who provided gratuities to the teachers and donated books. The ten acre farm produced turnips, carrots, parsnips, flax, barley, onions, leeks and cabbages.

The board of guardians leased a further 15 acres from the widowed Laura Hewson in 1852, bringing the total acreage of the farm to 25 acres. There were three paid staff members: the master or schoolmaster, an assistant schoolmaster and a steward. Along with about 70 ‘pauper boys’ on the farm, there were 23 adult ‘inmates’ in the workhouse. The workhouse residents in Ballyengland were known were referred to as ‘inmates’ rather than patients or residents.

The agricultural school continued until 1854, when the residents and the boys were moved back to main workhouse in Rathkeale, which was built near Holycross, north of Rathkeale, in 1841. 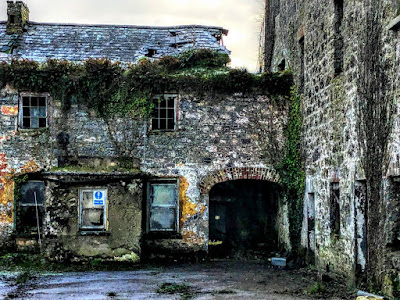 There was at least one outbreak of cholera in the Ballyengland workhouse (Photograph: Patrick Comerford, 2021)

The story of Ballyengland Auxiliary Workhouse is told by Morty Wallace in the 2019 edition of ABC News, the annual magazine of the Askeaton/Ballysteen Community Council Munitir na Tíre (pp 89-91). 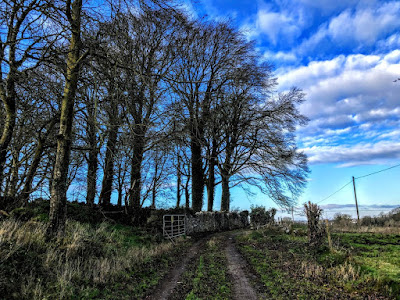